Five years ago I built my first 7-string guitar and installed affordable E-Z-Lock Wilkinson tuners; with the benefit of hindsight would I still fit these tuners?

Building too-many-guitars is an expensive habit, especially when building them purely for yourself. It makes you appreciate the second-hand market for kidneys and teaches hard decision-making on hardware choices. Whilst the gold standard might be a premium set of Sperzel, Schaller or Hipshot tuners the final decision often comes down to final project cost. Saving on the tuners might cover you most of the cost of a pickup or tank of petrol (five years ago).

Wilkinson tuners occupy an interesting place in the market. They don't appear to compete with other manufacturers through the usual marketing techniques; they are just everywhere and easily found as fit-for-fit alternatives to established tuning machine patterns. The reasoning for my own purchasing decision was that "hey, they're cheap and after all I can upgrade to the real deal when I have the money!". Five years later they are still on there. That probably says a lot more about me than it does the tuners though.

Tuning machines dial your instrument into tune and - with the best will in the world - it is still there when you pick your instrument up and whilst you're playing. It's nice when they look pretty as part of the deal too. Spending top dollar on your tuning machines usually fulfils all three of these; scrimping sometimes gets you one or two at best.

On the face of it, the Wilkinsons managed all three for about the price of four packs of D'Addarios. The Schallers I originally wanted were about four-five times that, coupled with the difficulty of finding a dealer that would supply me with my silly 3+4 tuner arrangement.

The E-Z-Lock proved to be an effective stringing system to eliminate excess string wraps that can slip and flex. Whilst this is probably more of a benefit for non-locking tremolo users, I have never received any benefit from this system. In fact, the strings currently on the guitar were strung normally without detriment to stability. The problem that the E-Z-Lock system is meant to solve just doesn't exist on this instrument.

The gearing has always seemed a little coarser than preferable for the wound strings, especially the 7th. Sometimes I find that tuning a few cents sharp and stretching the string out is easier than manipulating the string flat beyond the lash, re-stretching out the play and gaming with the mechanism to land correctly. The ratio (15:1?) is not too dissimilar to other tuners, with the Schaller M6s I originally wanted being 16:1 anyway. That coarseness in tuning just comes from the nature of the tuning and string tension. I feel that room for improvement exists, but in no part is this down to a lack of quality in the tuner mechanism. A Schaller M6 would feel more or less as coarse.

Five years of use should cause tuners to exhibit a degree of wear and tear or inconsistency. In terms of the mechanism, this just hasn't happened. Each tuner feels smooth in use and adjusting the button screw's tightness gives them all more-or-less the same resistance to turning.

The one area which leaves me the most disappointed with these tuners is the gold-look plating. I do not currently gig and my instruments are played purely within the home and seldom elsewhere. The plating around the edges of the tuner buttons has more or less disappeared, and certainly not through heavy usage! Corrosion from skin contact happens. It's a fact of life....however it should not happen as swiftly as it has done on these components.... 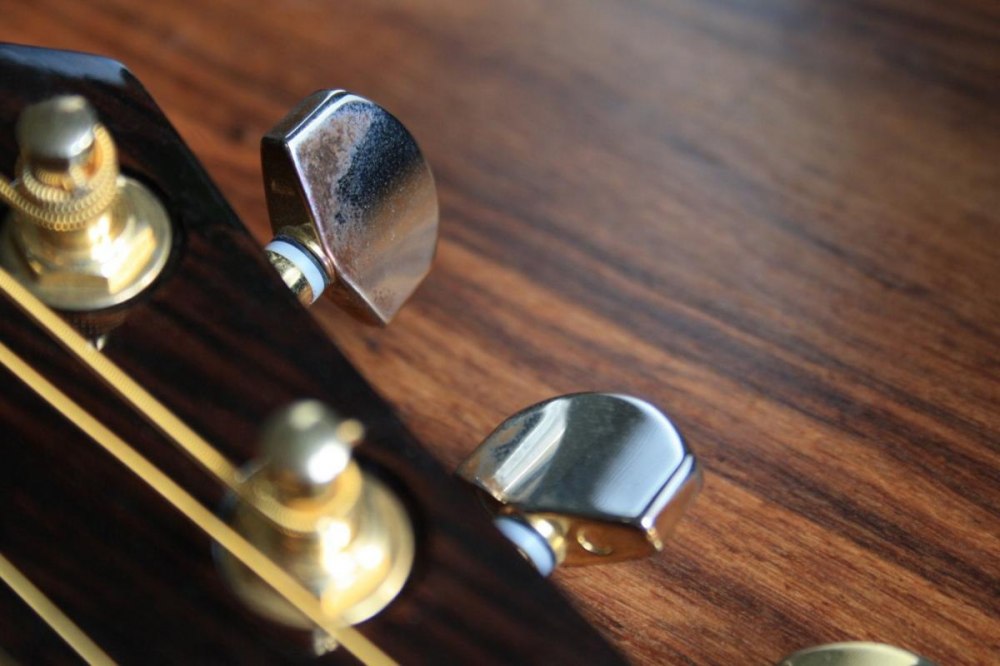 Wilkinson tuners were an appropriate choice when I built this guitar. The affordability of the product was a big plus, especially when the performance exceeded my expectations. I still want my Schaller M6s on there but I doubt I will get around to it any time soon. The tuners manage to get the instrument in tune adequately and it stays there (for the most part) but the finish is the big let-down.

On that basis, overall: 2/3. To answer my leading question of whether I would use these again? That answer is an overwhelming "yes".