Entry for January 2020's Guitar Of The Month is open - ENTER HERE!

Voting is also open for Guitar Of The Year 2019 - VOTE HERE!

Hot on the heels of our review for the Triton TSPS450 oscillating spindle sander, we're taking a look at its cousin which "offers" similar capabilities "in addition" to belt sanding....

Our experiences with the Triton TSPS450 oscillating spindle sander were somewhat mixed. It was our opinion that it represented a great tool for the money in spite of it being a simple badged Far Eastern import with cheesy design and less than durable build quality. For the home gamer it would be a great addition to a workshop, as long as it didn't crap out within a few hours like ours did.

Also a badged import product, Triton recently introduced the TSPST450 which has almost the exact same specifications as its sibling. Add onto this the tiltable worktop and belt sanding unit it seems a very attractive alternative for relatively little additional cost.

The Triton TSPST450 is a light duty benchtop machine driven by a 450W fixed-speed motor. The tabletop measures 430mm x 410mm (~17" x 16") and is made from two pieces of cast aluminium. The front half is capable of being angled up to 45° from flat, allowing angled sanding. The body of the machine is simple economical polypropylene, same as the TSPS450. The oscillating 13mm spindle can be fitted with one of five sanding sleeves; a 13mm sleeve fitted directly, or a 19mm, 26mm, 38mm or 51mm on rubber drums. The belt sanding unit provides a flat sanding face by simply dropping the unit into place and securing with a plastic thumbwheel. Power is managed by a single magnetic safety switch which prevents the units re-engaging should mains power be lost and re-established without manually disengaging the unit. Dust collection is provided through a single 38mm side-mounted port. All accessories and parts can be stowed around the body of the sanding unit for easy access. 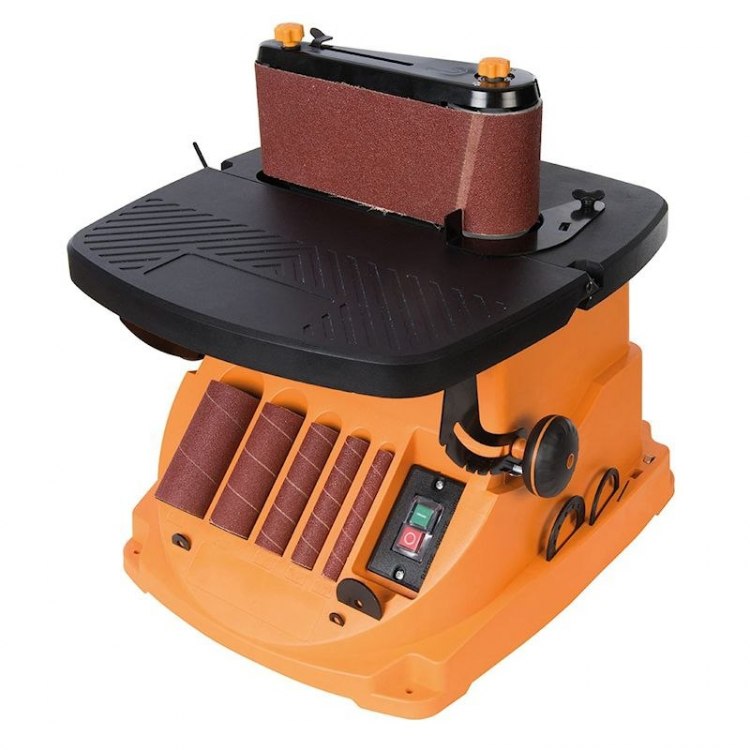 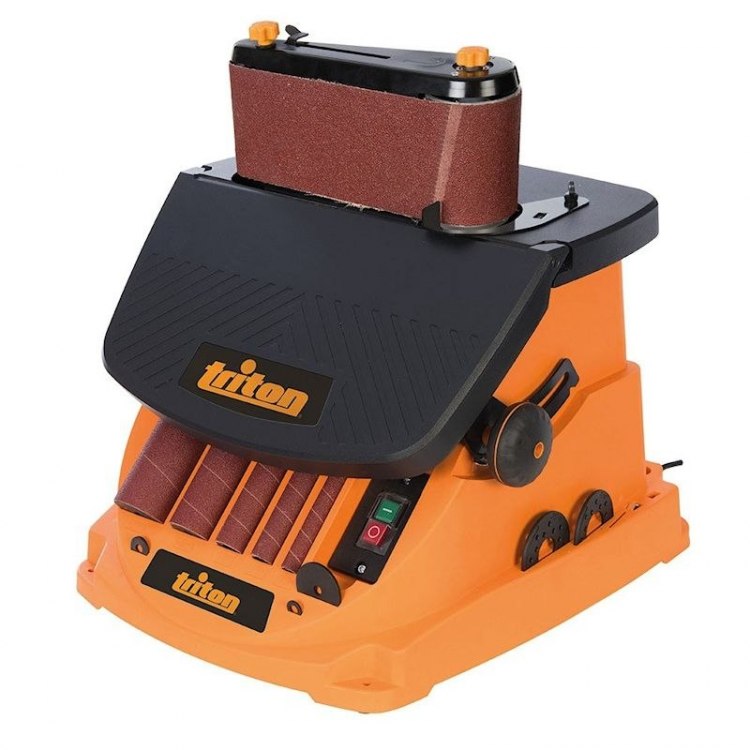 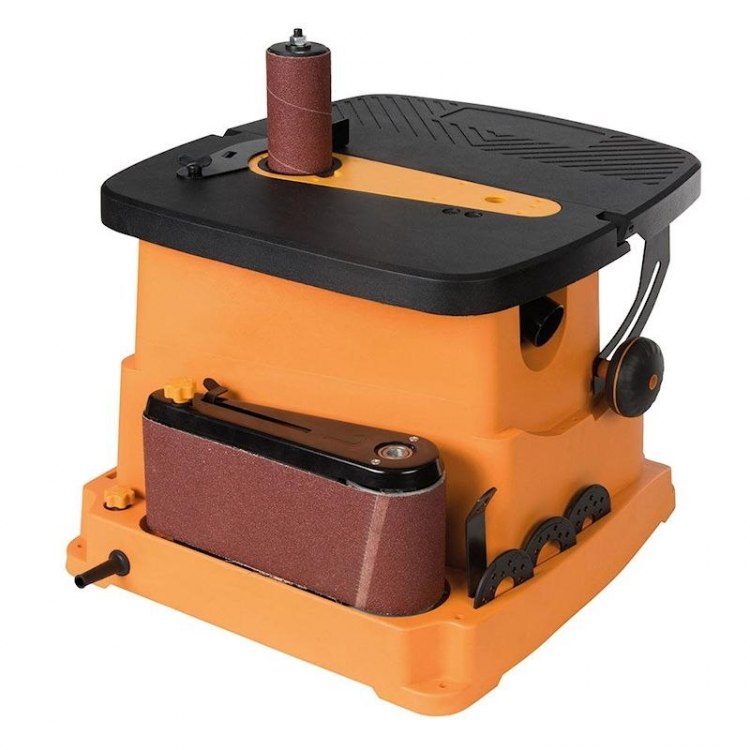 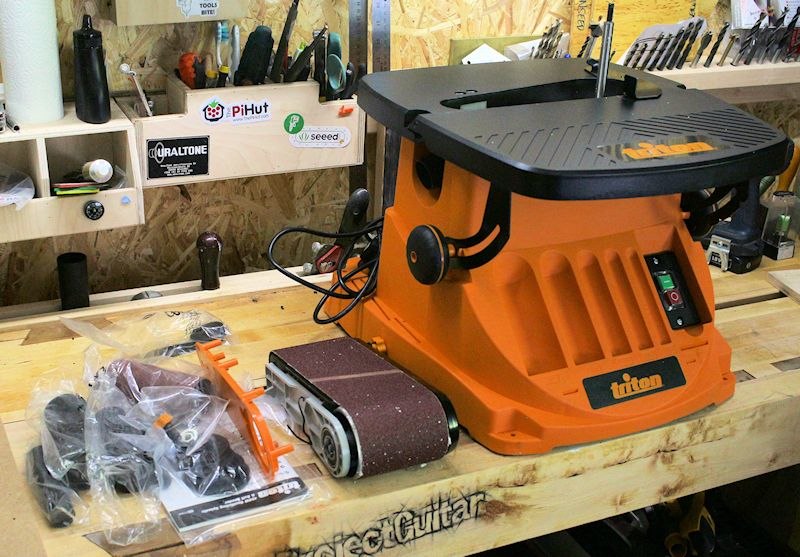 Straight of the box - what you get

In its spindle sander configuration, the unit performs similarly to the TSPS450 and sounds just as loud! Without taking a peek under the hood, it is expected that the motor configuration is more or less the same, ie. a dual belt drive running the spindle and oscillation. These belts work by driving a pair of plastic rotary cams; one connected to the main spindle's rotation and the geared at a marginally-different speed to the first to actuate the vertical spindle motion via a cammed profile. Whilst not idea from a design standpoint, it is to be expected at this price range.

The belt sanding unit however was a completely different story. This is simply driven by the spindle at one end and left to move freely at the other, retained loosely by a tiny plastic guide. Operating, this produces excessive vibration as the linear up-down motion is not restrained or guided properly. As a belt sander this is completely useless; the vibrations cause the flat sanding face of the belt to rattle back and forth making any delicate operation impossible. Checking the setup confirmed that this is just a product of poor design. A small piece of plastic retaining and guiding the non-driven end of the belt sanding unit is poor; any sort of play here would result in a useless vibrating mess, which is what it ended up being.

The body of the unit has four bolt holes, with the intention of it being mounted securely to a benchtop more or less permanently. This isn't convenient for most (myself included) and reveals another problem with the belt sander; presenting a workpiece (such as the back of a neck) with any reasonable surface area to contact the belt causes the unit to climb along! The weight of the unit is simply insufficient to work reasonably as a free-standing machine; whilst the design intent is as a fixed unit, those of us that need to make the most of a limited shop space will find this a frustrating issue. Physics are just not on its side.

Hooking the dust collection port to the shop extractor showed a reasonable extraction level, but one that loses a lot of power where it counts; the port pulls air from the entirety of the open recessed area in the top plate, slowing down air velocity and resulting in poor extraction even with the cover plates. Dust in both spindle and belt sanding modes was thrown around the unit with perhaps half being taken away. In comparison to the TSPS450 spindle-only sander, this is a drastic step down in performance. 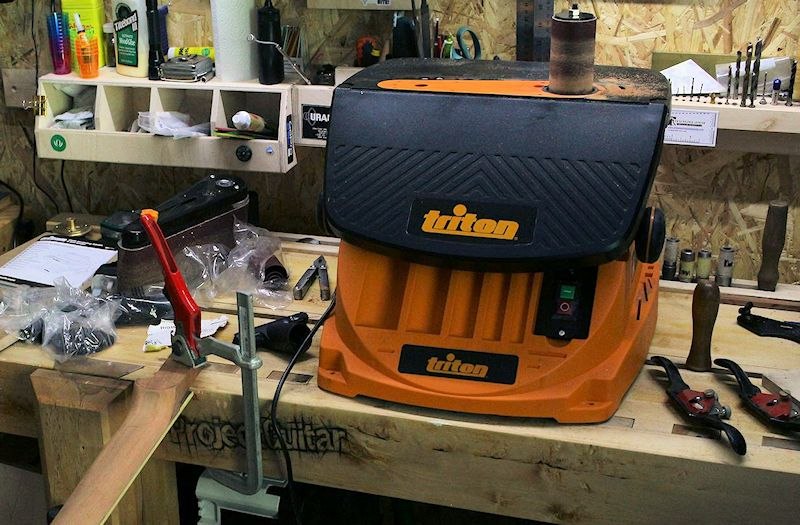 Compared to the TSPS450, this unit is clearly worse on many levels. Whilst its function as an oscillating spindle sander is more or less comparable (extraction excepted) it fails in almost every other aspect. The aluminium top (unlike the TSPS450's cast iron top) makes the unit light and prone to movement (unless bolted down) and several key points call the units long-term longevity into question. The main spindle drives the drums and sanding unit using one small keyed plastic disc. All of the force required to operate the unit is the equivalent of having a plastic clutch plate in your car! If you're the type to look for signs that a product is "engineered to fail", you'd be looking no further for a smoking gun. On the other hand, you could call this "failure to engineer". This interpretation applies equally to the awful method of translating the reciprocating motion of the spindle into linear motion of the sanding unit. Nothing about this speaks of quality, durability or simply being fit for purpose.

Items and tools purchased for review accurately reflect buyer's remorse. That said, if this tool were received for review free we would simply not be publishing a review. More likely, firing an email back asking whether this machine was a private joke and checking whether it was April yet. The TSPST450 is available from a number of different brands other than Triton, same as the TSPS450 is. It is not a Triton design, simply one ordered in Triton's livery and branded along with the rest of their product lineup, so it might be kinder to say that this may not represent the standard to which Triton's own-design products are made. That said, Triton put this out there alongside their own products so it will represent the perceived standard of the Triton brand on the whole regardless. As stated in discussion with PowerBox/Triton's media relations, we are willing to be proven wrong by their other products. Buyer's remorse is a powerful thing however, and I personally won't take another chance on a Triton tool.

We received this machine as an "upgrade" (paid) exchange for the TSPS450 that developed an early electrical fault. Given the small timeframe between working with that machine and comparing it to this one, it would be impossible not to make direct comparisons when the are so similar in specification, common parts and their provenance as badged imports. The TSPS450 succeeds purely because it is unbelievably simple, and under the crappy exterior that's what this unit is in principle. It fails by attempting to add complexity whilst simultaneously killing durability, reliability and quality. And increasing the price tag.

For your money, the TSPS450 stands head and shoulders above this sorry mess. Whilst the TSPS450 doesn't buy you the oscillating belt-sander capability, neither does this one. Move along or buy the TSPS450, bearing in mind that other brands offer the same unit a little cheaper and likely with a less obstructive warranty than Triton's "3yr but only if you register within 30 days, and even then you'll have to pay for it to be pinged around our very few service centres worldwide". 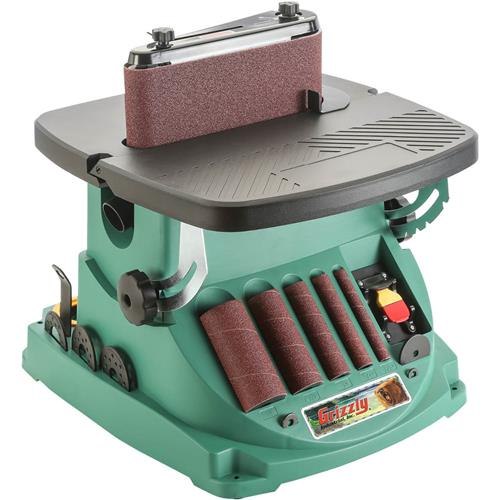