Even though virtually every guitar has one, the sheer amount of opinion and conflicting information on truss rods leaves players, builders and even techs with fundamental misunderstandings. How they really function and their actual purpose in the wider context is vital in making your instruments playable and controllable.

The truss rod is a simple device both in operation and action, however it's understandable why there seems to be a little mystery and confusion about them; they're hidden deep in the neck, under a truss rod cover, out of sight and out of mind. Most people "set and forget", sometimes for decades!

As builders, it's of paramount importance that we know exactly how and why truss rods work as they do, and the comparative differences between the different types. If we don't, we're unable to fully predict or take advantage of their effects. Why do we need them in the first place? What problem does a truss rod solves or what advantage does it offer? Which is the "best" type in a given design?

A little basic history helps get us started....

At the turn of the 20th century, electric instruments didn't exist and acoustics were still strung with gut. The relatively low string tension of gut strings caused few issues with necks, so neck construction was basic; simple solid wood. They didn't need to be anything else.

The invention of steel strings was an overwhelming transformation for the guitar but brought bad along with the good; the far greater volume turned a quiet instrument into one that could compete with banjos, mandolins and violins. The vastly-increased string tension however took its toll on necks, causing them to bend forwards uncontrollably, affecting playability and durability.

The first attempts at solving the problem were simple; laminates of stiff wood were inlaid under the fingerboard to make the entire neck more resistant to bending. This was an inconsistent fix, but nonetheless a move in the right direction. In the early 1920s, Gibson introduced the first mechanical solution to reversing the effects of string tension on the neck leveraging physics through a simple mechanism; the single-acting compression truss rod.

The principle was simple; tension applied between two fixed endpoints of a curved rod will cause it to try and straighten itself. This movement opposes bending in the neck induced by string tension, allowing the neck the be gradually adjusted into a more desirable geometry as the opposing forces balance each other out.

One of the key misunderstandings of a truss rod's action, is that it is meant to do anything other than add a method of control into the neck. It is easy to make the logical mis-step that the problem a truss rod solves (excessive bending in necks) means it is a direct remedy for the cause (insufficient stiffness in the neck). This is false; a neck is not made significantly stiffer by the inclusion of a truss rod; they simply counter the symptom rather than eliminating the cause. We will examine static neck reinforcement in a separate article....

The single-acting compress rod was a much-needed revolution in neck design. They allowed necks to extend farther beyond the body, be more slender in cross-section but most importantly be continuously controllable.

The basic anatomy of a single-acting compression rod (also called a "vintage style rod") comprises a length of (typically) steel with some form of anchor fixed at one end and a method of applying tension at the other. Anchors can vary from a peened barrel nut, a toothed slug or simply a bend/loop in the rod itself; something to immobilize one end of the rod and prevent it rotating in place.

Single-acting truss rods are most commonly found set into curved channels, deeper in the centre. This curve acts as a pre-load on the truss rod; the larger the curve, the more pronounced and sensitive the action of the truss rod will be when adjusted as it tries to straighten itself. Occasionally they are installed into straight channels deeper in the neck, relying on the compressive effects on the wood between the anchor points to combat neck bending. 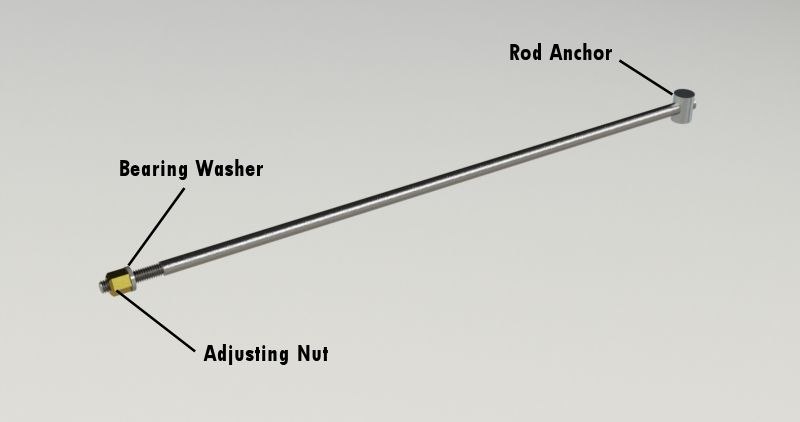 The single-acting truss rod is an simple component to manufacture using readily available tools and adds very little additional weight to a neck. Compared to other designs, the work that a neck requires to be fitted with a single-acting rod is slightly more difficult but produces a much more solid finished item. Once fitted, the rod more or less becomes part of the neck; the only moving parts are the adjustment nut and bearing washer. Some builders are of the opinion that a neck built in this manner sounds superior to other designs, however this is highly subjective and varies from opinion to opinion. It's simply impossible to quantify in real terms.

A noticeable downside to necks fitted with single-acting rods is their sensitivity to environmental changes; the dimensions of wood constantly alter in response to relative humidity, whilst the metal doesn't. This causes shifts in the balance between the neck under string tension and the opposing force of the rod. Owners of instruments with single-acting rods need to make more maintenance adjustments to their necks to keep them in optimum playing shape.

In part 2 of this guide, we will look at the progression on the single-acting compression truss rod; the dual rod truss rod.