In part one of this series we presented the origin of the truss rod and the problem it was designed to solve. This week we're turning our view towards a more modern development on this idea; the dual truss rod.

The single-acting compression style truss rod is simple and easy to fabricate. They are not without their disadvantages however. Fundamentally, a compression rod relies on the wood it is mounted in to remain stable. Wood fibres respond to shifts in relative atmospheric humidity by absorbing or losing water; metal does not. Changes in the moisture content of wood subtly alter its dimensions, and consequently the truss rod will react with these dimensional changes.

As neck wood gains moisture it expands, increasing compression of the wood between the truss rod anchor points as it pushes outwards, thereby raising tension within the rod itself. The result is the same as if the truss rod were cranked tighter; the force bending the neck backwards against string tension increases, reducing existing relief or even inducing an unwelcome backbow. This movement requires that the truss rod be loosened to compensate.

The opposite is true when relative humidity drops. Wood loses water and contracts, causing the compression of the wood between anchors and the apparent tension of the truss rod to lower; the equivalent to relaxing the truss rod adjustment nut and allowing string tension to pull the neck up into a higher relief/upbow. This requires a tightening of the rod adjuster.

tip: torrefied wood (also called "caramelised", "toasted", "roasted", "thermo-treated", etc.) is more or less immune to shifts in relative humidity; this makes great vintage-style necks with single-acting rods for touring musicians who may be playing Arizona one week and rainy season Chiang Mai the next.

The dual truss rod factors out the wood from this equation by decoupling itself from the neck wood and becoming a completely self-contained mechanism. Instead of acting against anchor points in the neck wood, a dual rod bends by acting against itself. This is achieved by the "acting rod" being paired with an auxiliary rod, metal bar or enclosed channel, anchored at the ends that would otherwise be secured in the neck wood.

At this point it is useful to illustrate difficulties in terminology. Unfortunately, we have no authoritative set of terms to describe truss rods simply because some terms are used interchangeably (or uniquely) by various luthiers, manufacturers and suppliers. Whilst not incorrect by any means (there is no established "correct") this lack of distinction tends to sow confusion when comparing rods, especially when flawed terminology is repeated verbatim. For the purposes of this series, we'll be adopting a simple set of common terms.

Dual rods can be either single or double-acting. This is also called single-way/double-way, one-way/two-way and dual-expanding amongst others. Acting describes the direction of adjustment possible; single-acting adjusts in one direction only (backwards against the direction of neck bending under string tension) whilst a double-acting rod can adjust both backwards-against and forwards-with if required.

A dual rod type of truss rod is not necessarily also a double-acting truss rod. A dual rod can also be single-acting.

Here we have a pair of commonly-found types of dual truss rod I keep for demonstration purposes. On the top we have a cheap import single-acting dual rod with the blue plastic shrink wrapping removed. Below is a StewMac "Hot Rod" double-acting dual rod. The masking tape applied to the rods is to simulate how they react under adjustment tension; in a guitar these would be installed into snug-fitting channels. Without the tape the rods bend away from each other which does not represent how they work in use.

Cranking the adjustment nuts clockwise to increase tension yields the expected result; a backward bow along the length of the rod which would provide adjustment against neck bending under string tension.

The reverse is not true; the single-acting rod's nut spins off after the rod is completely relaxed whilst the StewMac rod demonstrates how it can induce upbow.

Like a single-acting compression rod, the single-acting dual rod has an adjustment nut which bears directly onto an anchor point. Instead of the neck wood, in this case the anchor point is a hollow metal cylinder welded onto the auxiliary rod (a metal bar) through which the threaded rod protrudes through. 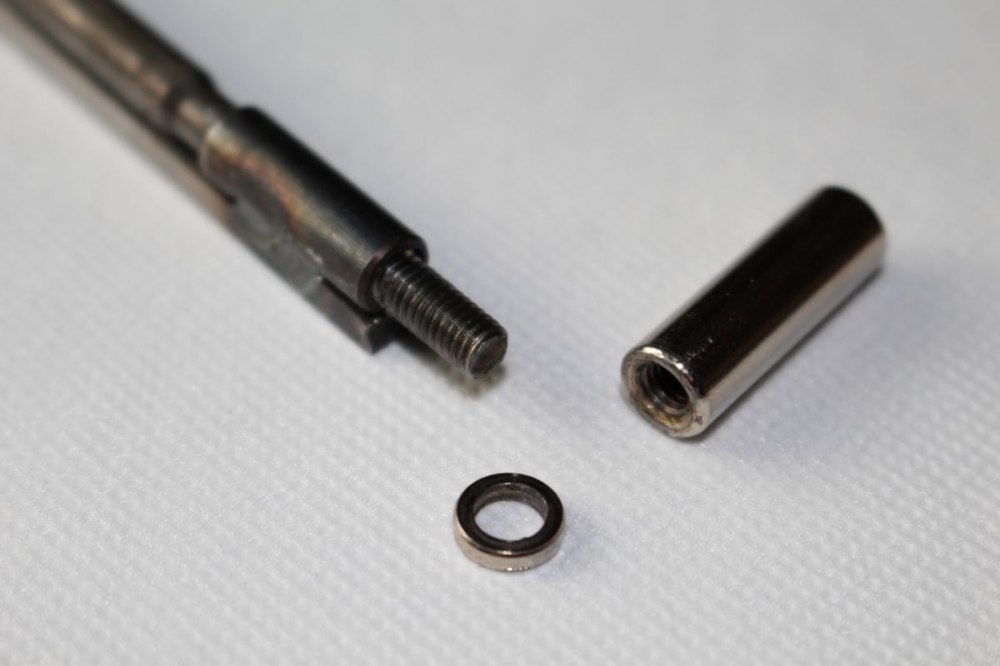 The opposite end of the rod shows that the far anchor point is simply both rods having been tack welded together. 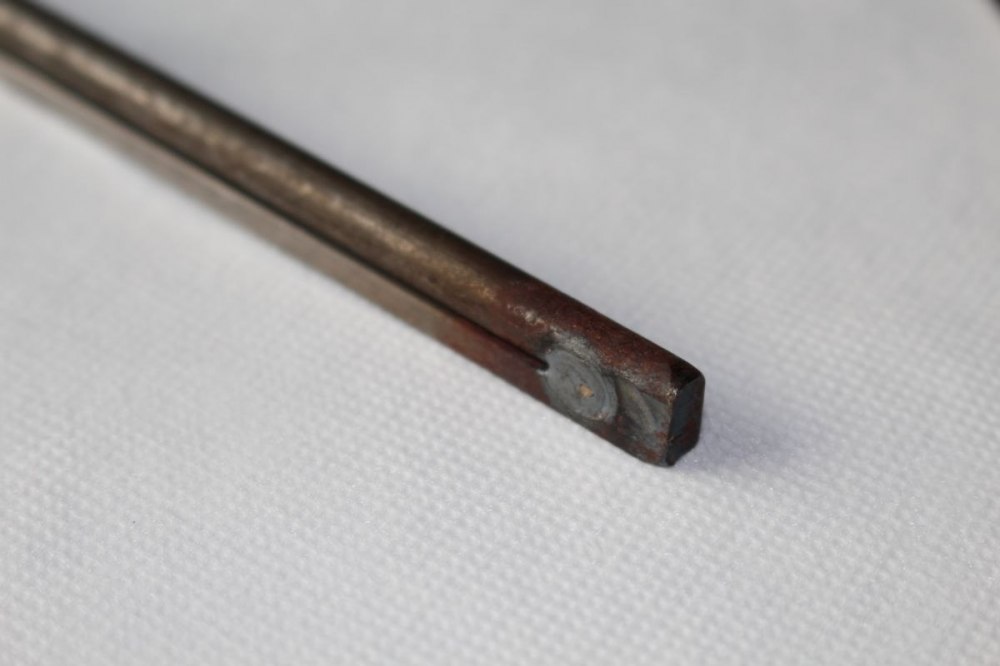 The StewMac rod however is quite different. Rather than the internal components being relatively static, the acting rod and auxiliary rod are threaded at both ends and fitted through brass blocks with corresponding internal threads. The adjustment nut is brazed onto the acting rod instead of simply threaded on. 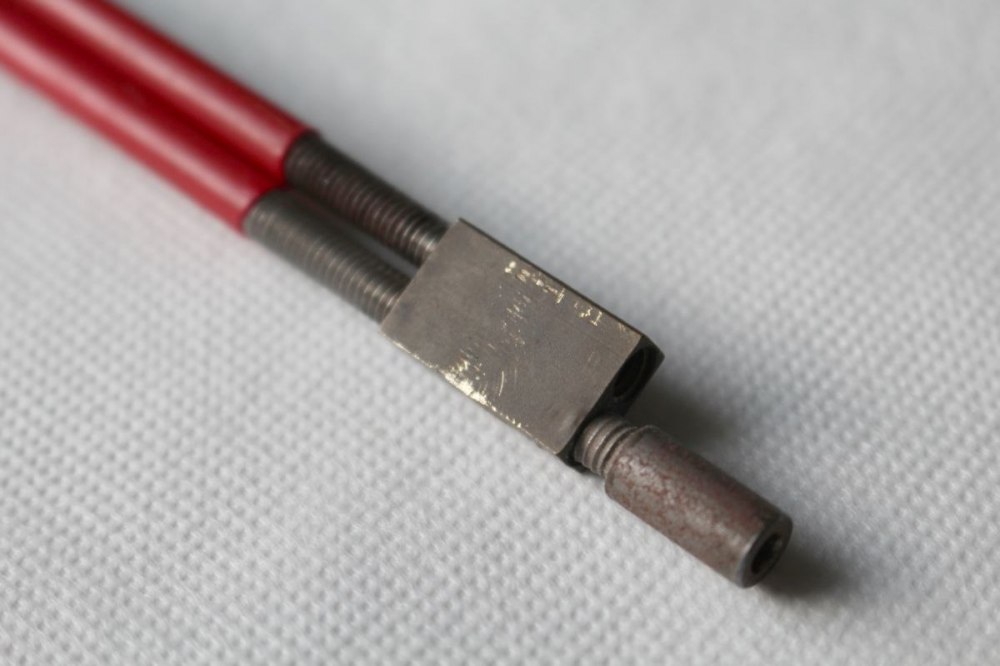 The far end reveals how the mechanism works; the threads at the adjustment end (above) are left-handed (anti-clockwise to loosen/withdraw the thread) whilst the far end are right-handed (clockwise to tighten/advance the thread). Turning the adjustment nut clockwise causes the distance between the brass anchor blocks to decrease, altering the balance of compression and tension between the two rods. The immobile auxiliary rod goes into compression, and bends via the path of least resistance, away from the acting rod which is under increased tension. The opposite is true when adjusting the nut anti-clockwise. 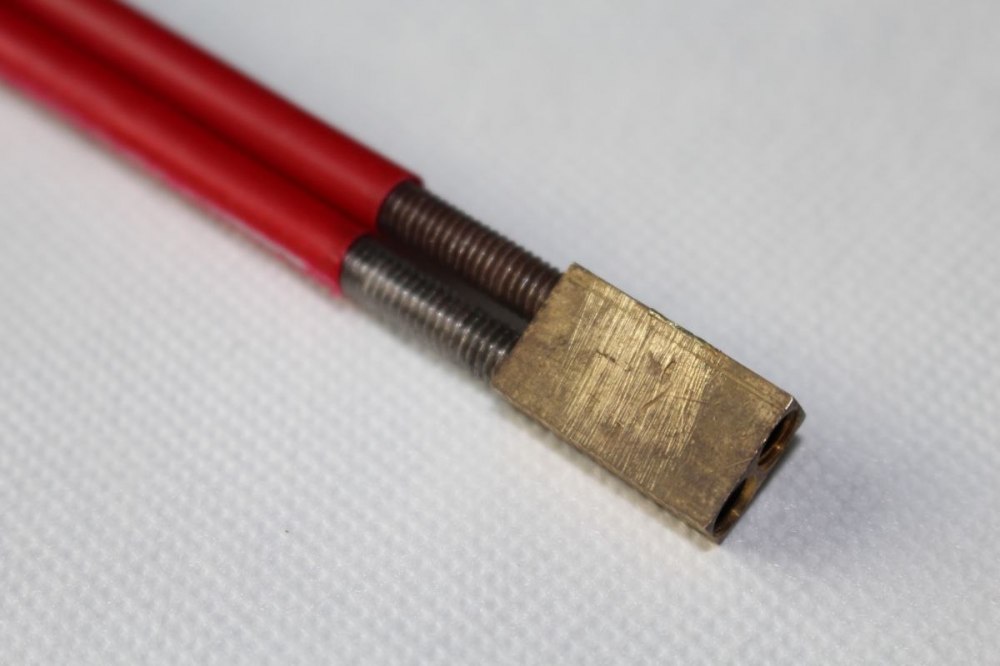 The important distinctions between the two rods (other than their action) are the construction and moving parts. Single-acting rods (both dual and single rod) are static and have no moving parts other than an adjustment nut bearing against an anchor point. Double-acting rods are mobile down their length; the rod itself rotates as it acts from both ends against both anchor points. The StewMac version has the unthreaded part of the rods wrapped in plastic sheathing to prevent excessive friction or binding which could otherwise seize the mechanism.

Variations resembling both of these rods exist; a flat metal bar with counter-threaded blocks welded at either end retain the same compact profile as the single-acting dual rod shown whilst having the same double-acting functionality of the StewMac Hot Rods.

A personal favourite of mine is a variation on the single-acting Martin aluminium truss rod. The Martin encloses the acting rod in a strong aluminium U-channel. The adjustment rod bears on either end, bending towards the open (lower) face. 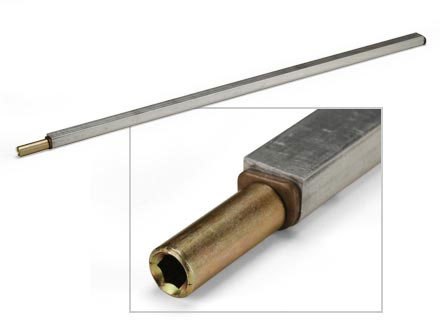 Gotoh manufacture (or, "manufactured" as they show it as discontinued) a two-way variation on this design. Instead of the nut bearing against one end, it is "captured" within an internal groove which allows it to bring the acting rod into either compression or tension, creating a two way action. 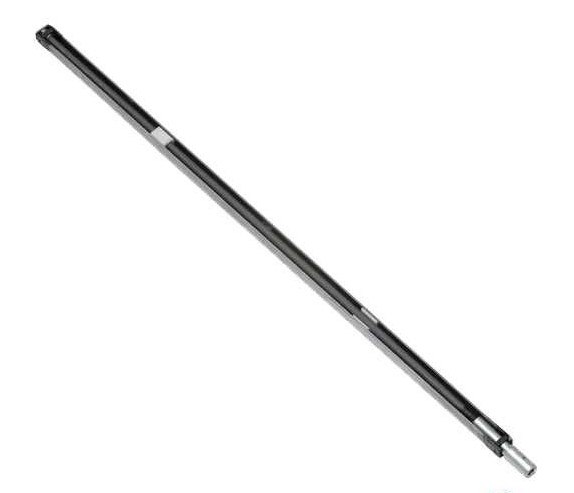 Perhaps the greatest difference that makes dual truss rods attractive to most luthiers and manufacturers over single-acting compression rods is that they are no longer reliant on being installed into a curved channel for pre-load. Dual rod truss rods are simply fitted into straight channels (generally) with the auxiliary rod uppermost. This can even allow some dual rods to be withdrawn from the channel for maintenance or replacement which is impossible for single-acting compression rods.

The third part of this series will illustrate the relative advantages and disadvantages of each style of truss rod and help you choose which is best for your own individual end use.