Developing practical personal working areas is a common issue to the complete beginner and seasoned builder alike. Slotting nuts in situ, hand-tuning a carve or routing pickup holes into a body requires specific workholding and for-task flexibility in a bench. This series discusses the pressures, solutions and requirements of a luthier, whilst highlighting how "traditional woodworking benches" don't stack up as being appropriate for luthiery. To cap it off, we'll describe a step by step build of an exceptional and affordable DIY bench design useful to luthiers of all stripes that won't break the bank.

No two workbenches are created equally, and a surprising number of details fundamentally alter their suitability despite (what might at first seem) superficial differences. Of course, a humble Black & Decker Workmate might not easily be comparable to a 16ft French-style Oak bench or even the dining table, however they can all be examined using the same criteria of, "what is useful to us as luthiers?". 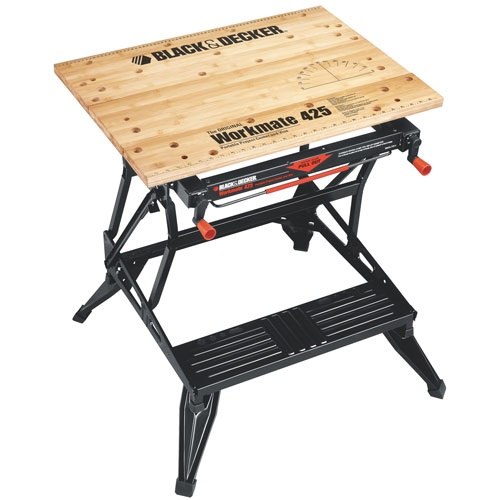 I think we can agree that this is far from ideal for working during winter on the patio (Source: Black n Decker)

Go and do a quick Google Image Search for "luthier workbench" and briefly browse the thumbnails. Absorb a bit about what you see; we'll come back to that again later. The reason I recommend this is that I have noticed numerous shortcomings in most people's workbenches, even those of established luthiers. It might not seem immediately apparent at this stage what the problems are, but we'll gradually illustrate that....

Primarily, most luthiers have learnt to "make do" with existing solutions that originally evolved to solve other woodworkers' problems. Sometimes this is out of necessity (any workbench is better than none!) but often we just don't recognise that traditional workbench styles are inadequate for the needs of a luthier.

Smart luthiers spend much of their time adapting ideas to better suit their own work, or creating entire new ones. A luthier's work is uniquely demanding in comparison to that of a furniture woodworker, kitchen fitter or patternmaker. Not recognising these demands and reacting on them by tailoring the functionality, ergonomics, efficiency, safety, etc. of the work area sets up larger problems waiting to happen. The work area has to be made to work in your favour; not left with the default settings and allowed to cause you more problems than it solves.

At the low end of the scale a poor work area causes beard-stroking and time-wastage. At the catastrophic end, errors are made, general work quality suffers, risks taken and money is lost. Dedicating thought into improving your work space impresses itself on the quality of your output and on your sanity.

Fundamentally, we just need to break down why benches are configured the way they are, the uses this configuration serves and then re-engineer ideas from the ground upwards. No one "real" luthier's workbench configuration exists since we gradually mould our working habitat around the needs of the work itself. No two luthiers have the same working processes, preferences or range of experience so it is impossible to hope that "one-size-fits-all". Regardless, the process of detailing a generalised design driven by general luthiery tasks should illustrate how simple it is for any individual luthier to evaluate their needs and craft their own solution.

After we've broken down the purposes of workbenches a little bit, we'll go back to that Google Image Search with new eyes. Hopefully you'll be able to spot which benches are less than ideal, and which ones are truly inspired.

About all luthiers, modifiers, tinkerers, etc. have worked off the dining room table at some point in their careers, and most people reading this might still be doing that. When did you last change strings or carry out a setup on the dining table? There's absolutely nothing wrong with making do with what is available, especially when options are at a premium because of money, space, etc. Working off a simple flat surface is vital to luthiers of all levels whether it's the dining table or a carpeted 2x4 frame bench.

Using a table in the home may not offer reasonable access to tool storage, ideal lighting conditions, workholding options or a sacrificial surface but it shares many points in common with a work area that a luthier would benefit from. Dining tables tend to be free of clutter, they sit at a height which is idea for seated close-up work, there is freedom to move around it, etc. Many excellent guitars wouldn't exist if it weren't for delicate negotiation with one's spouse to utilise them.

This is not me advocating that you move out of the workshop and migrate back into the home however. Simply, it emphasises that we need good clear and clean space. A poorly-organised workbench that encourages disorder and sloppiness is a magnet for Bad Times.

At the other end of the scale are the workbenches that populate many "fine" woodworkers' workshops, schools and old-school shops. My first explorations in workbench design started in this very same territory. Christopher Schwarz' excellent, "The Workbench Design Book" inspired me to build my own French-style workbench from solid Birch.

Despite a traditional woodworker's bench being very useful for the non-guitar work I was doing at the time, it reinforced how well-suited it is at doing the tasks it originally evolved for; hand tool working the faces, ends and edges of large rectangular things! Applying luthiery tasks to this workbench just highlighted its lack of finesse, unless I really wanted a flat rectangular instrument. Most of the time it only provided me with a useful flat area to work on....which isn't that much of a step up from the dining table example is it?

Big bruisers like my several-hundred kilo Roubo excel at providing an unmoving structure which won't rock, slide or react to having a hundred-kilo gorilla driving wide jointing planes down workpieces secured to it. We rarely need to exert that much force on anything we do making or repairing guitars! Even planing the sides of neck-through blanks or facing lumber by hand. More than likely when I set up a new working space, the Roubo will become a base for securely holding larger jigs such as the router thicknesser bed or even the Myka neck jig. Fundamentally, its uses are just too coarse for guitar work and it's the wrong height for eating dinner. 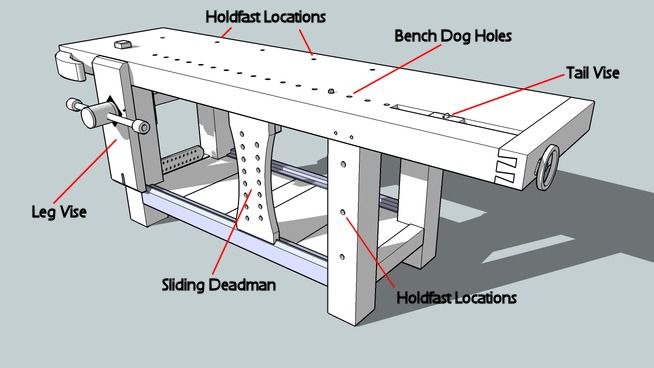 Workbench styles evolve from the pressures of the work expected of them. A Black Forest cuckoo clock maker's bench is radically-different from that of wooden gate maker. Shoehorning a bench whose DNA is fundamentally different to the task at hand means that everything becomes a series of compromises and workarounds to get even the simplest job done efficiently and correctly. A hammer isn't really the best tool for driving a screw.

Fundamentally, the Roubo grew to satisfy the requirements of pre-industrial hand tool users working on large heavy (generally flat and/or long) boards. The same rough arrangement exists today in commercial woodworking benches, such as those in the core range from Sjöbergs: 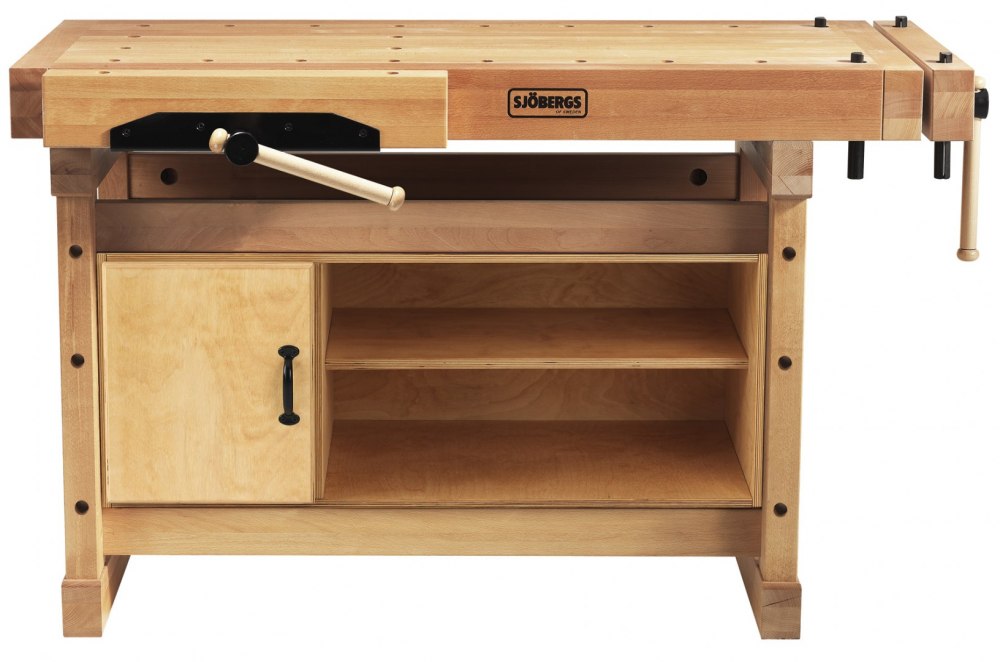 Sjöbergs Elite 1500 model bench. A more practical size, but not the workholding we need.  (Source: Sjöbergs)

Whilst being a little more universal than the Roubo, the underlying configuration of Sjöbergs' standard benches is more or less identical; designed to work on face, edges and ends by hand. The front vise might seem useful at first glance, however it will likely spend more time as an obstacle than being in use, and ultimately is designed for holding non-guitar shaped things. The wide tail vise in combination with the dual bench dog rows is more useful for routing operations on flat pieces, however simpler workholding arrangements exist and the ergonomics may not be ideal. As a turnkey bench, these would get you in the ballpark however I would have a difficult time rationalising the hacking and deconstructing necessary to my thousand-plus workbench to make it do what I wanted it to.

How do you decide on the height of your workbench? Do you spend more time sat or stood around it? Traditional benches are surprisingly low; mostly due to their expected tasks requiring a wide and powerful stance. Physical tasks such as hand planing (especially with old tall wooden planes) benefit from a lower bench than relatively static standing jobs such as hand routing. Pleasantly, the Sjöbergs bench weighs in at an ideal height of around 36" which is also somewhat odd given that this makes it almost too tall for a good planing stance. It is however about the correct height for seated work such as soldering and other fine work. Unlike many other bench aspects, raising the height is not usually too onerous, especially given how transformative 2" can be to a bench you spend any length of time hunched over. Designs with foot stretchers such as the Sjöbergs are difficult to lower however.

Workholding is an enormous topic which we'll partially cover in part two of this series, whilst introducing design aspects for a more usable luthier's bench. For the moment it is sufficient to say that guitars are rarely (if at all) comfortable being secured using the vises and clamping methods designed for handling rough semi-finished wood that is more or less of square dimensions. We are needing to fit our delicate guitar-shaped pegs into somewhat rectangular shaped holes, however the vast majority of workbench designs - both commercial and traditional - do not entirely satisfy our needs. We need better ways of stopping our work dancing around the table.

A more universal productive luthier's bench should be capable of holding necks and bodies  in all states of the process firmly yet safely whilst offering free workpiece access from any angle we choose....all without devices and whatnot cluttering up the valuable flat real-estate around our bench.

In part two, we'll look at how we can move beyond this by making our benches smarter.

Post photos of your own workbench in the comments below! We'd love to hear exactly how everybody arrived at their own bench designs, the troubles you experience with it or the problems you solved!

A Luthier's Workbench Pt. 1 by Carl Maltby is licensed under a Creative Commons Attribution-NonCommercial-ShareAlike 4.0 International License.