Flexibility in safely manipulating and securing arbitrarily-shaped workpieces is a strong test for any luthier's workbench. What transforms a simple flat area into a productive and capable workbench?

Methods of holding one thing to another thing is an enormous topic. To make this more digestible, we'll elect to ignore highly-specific subjects such as auxiliary vises, vacuum retention, pneumatic holddowns, double-sided tape and the like. For this we'll concentrate solely on the meat and potatoes of clamping; clamps. We all have them (I hope) and none of us have enough of them, apparently.

Good clamping practice relies on a passing knowledge of physics. Even though that sounds like an immensely boring subject to be getting into, it's all pretty simple stuff. Fundamentally, clamping is about applying inward pressure evenly - and generally perpendicularly - into at least two mating surfaces. 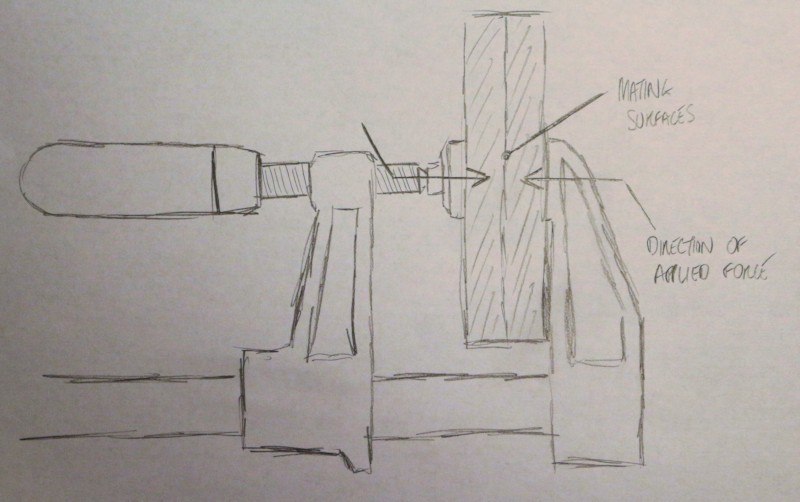 How this applies to a workbench is important. I am sure that most people reading this article will have clamped a large flat piece of wood (such as a body blank) onto a bench using F-clamps fitted under the bench top and onto the workpiece. The workpiece and bench top take the place of the two bits of material in the previous sketch. Tilt your head to the left and have another look.

This generally works up to a point; the reach of most F-clamps is limited by the throat size. This constrains us into only being able to clamp workpieces to the edges of our work area, and this can sometimes become precarious or even unsafe. F-clamps around the skirt can be made to work for most tasks, however constant compromises and workarounds are often made; the complete opposite of a safe, flexible and capable working area.

Ideally, we need to be able to place and orient our workpiece exactly where we want and clamp it securely, with as much free access around the item as possible.

Beyond F-clamps, there is an enormous selection of weird and wonderful clamping systems designed solely for holding a workpiece down to your work area. It would seem that for every type of potential clamping problem you might have, there is some kind of clamp solution designed for it. Browsing through the range of solutions available from companies such as Lee Valley/Veritas, Bessey Tools or any number of woodworker's tool suppliers you can easily imagine how a comprehensive set of workholding clamps, jigs and bespoke contrivances soon racks up.

People will repeat this until the end of time; "you can never have too many clamps". Whilst generally this is true for glueups, simply throwing more and more clamps into your workholding is a poor investment, especially when the other half of the equation hasn't been given consideration; the work surface itself. A little intelligent design here enables a few simple and efficient clamping ideas to vastly increase your ability to secure and manipulate workpieces and jigs around your bench.

A T-track or T-slot track is simply a channel used as the base for securing "something". These are commonly seen in the beds of milling machines and machining centres as the basis for simple workholding, securing larger workholding devices, or in the case of small CNCs made from 80/20 aluminium extrusion, construction of the unit itself. A T-track is simply a channel shaped like an inverted letter "T". Devices are secured into this channel using correspondingly-shaped T-slot nuts. 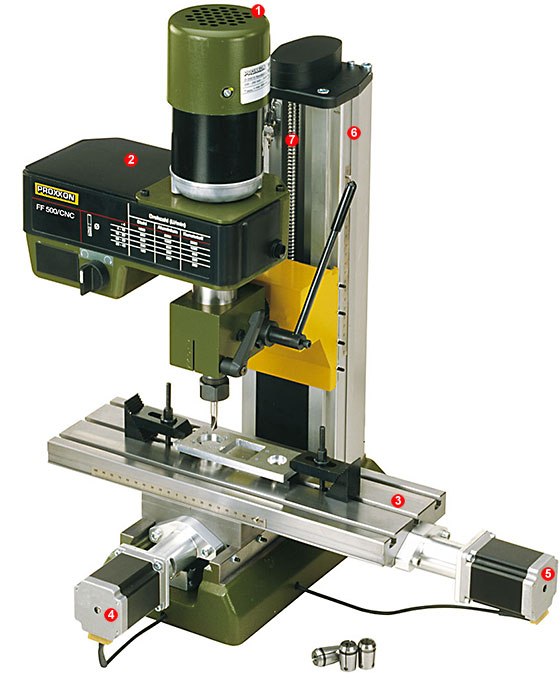 In this fine luthier's workbench, we can see that the top has had T-tracks milled into both surfaces (the top can be flipped over itself). These run from the front and rear edges plus one large track centrally. 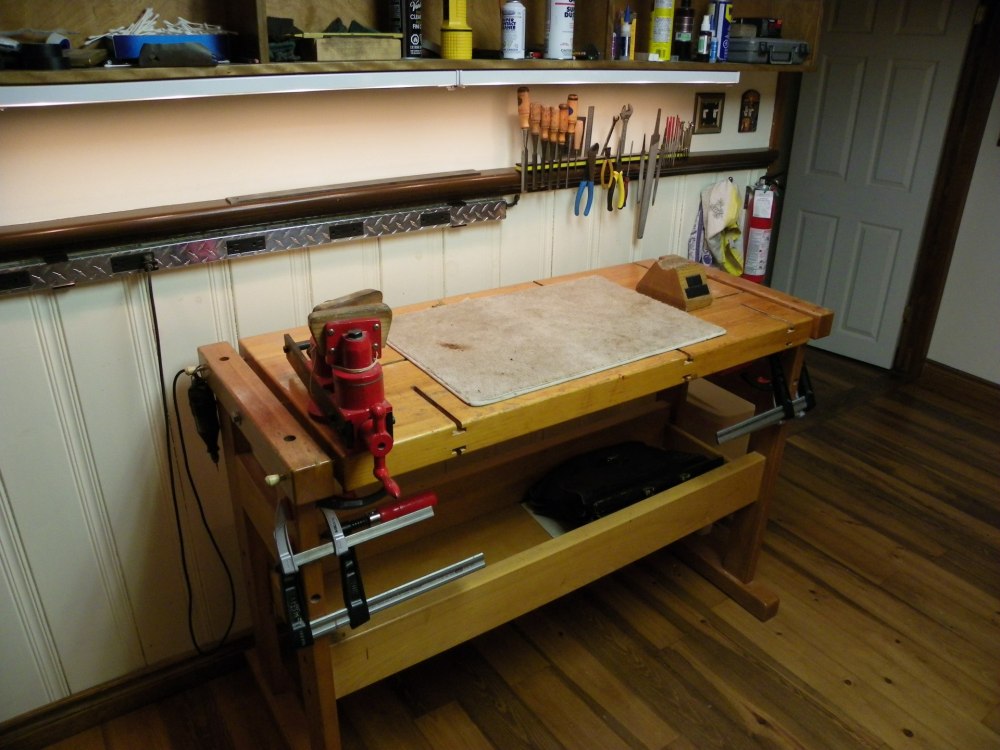 Commercial solutions exist for adding compact T-tracks to a wooden work surface. Primarily, these come as lengths of aluminium extrusion (usually compatible with standard T-slot sizes) such as INCRA's T-track product range or Rockler's Universal T-Track. These are a great buy as a turnkey method of upgrading your bench into one with far greater workholding capability. This is not to say that you should empty your wallet right away; you can always roll your own. As in the bench example above, the over-sized T-tracks allow them to be made directly into the wood.

Clamps based around T-tracks (whether commercial or to your own design) rely on slightly more complex arrangements than a simple F-clamp however. The mating surfaces and direction of applied force are the same; inward pressure against perpendicular surfaces. 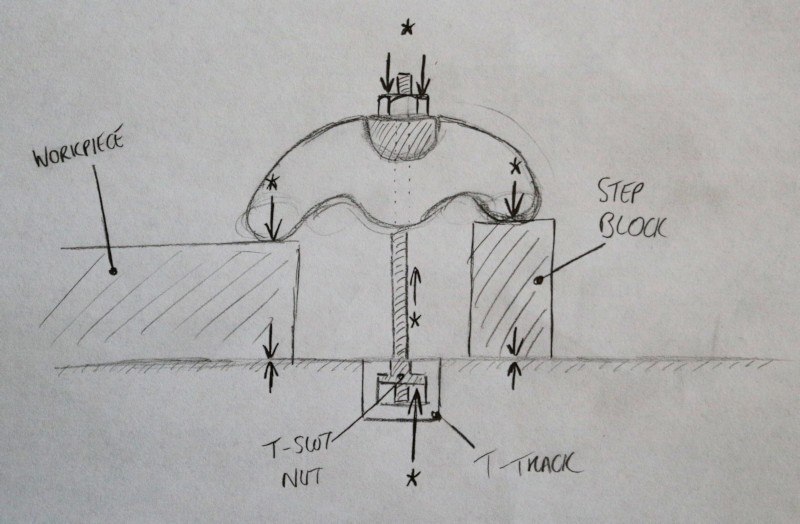 This is known as a "step" or "balance" clamp. The clamp consists of a threaded shaft with a T-slot nut fixed to one end and an adjustable clamp body on the other. The threaded rod slots through the clamp body and into a circular fulcrum which can allow the body to tilt either way slightly. As the top nut (or knob) is tightened down onto the fulcrum, the opposing force between the T-slot nut in the T-track versus that of the nut is divided equally (if the clamp body is symmetrical) against both the workpiece and the step block. Offsetting the fulcrum point towards the workpiece allows greater pressure between the bench top and the clamped location.

Balance clamps exist in a number of forms from the commercial Woodpeckers Knuckle Clamp: 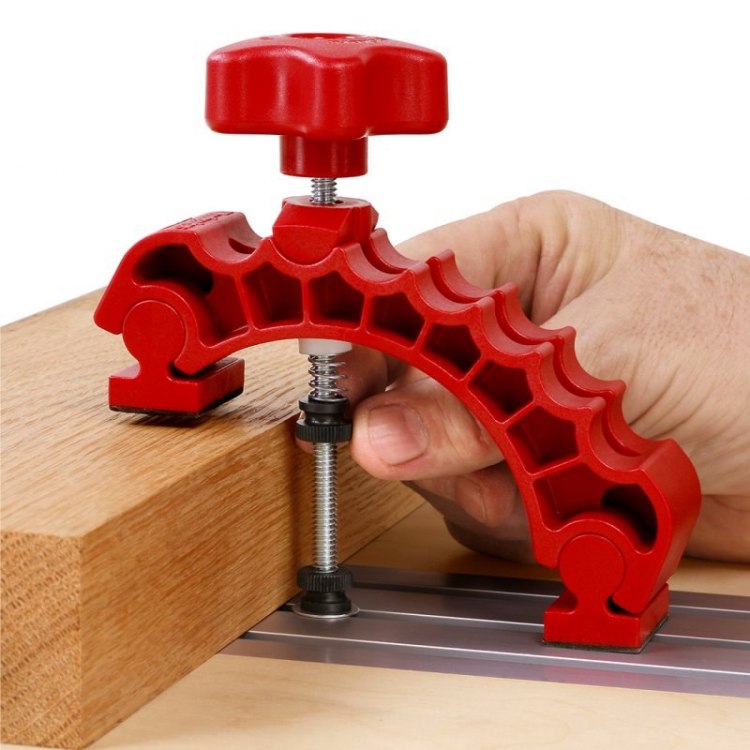 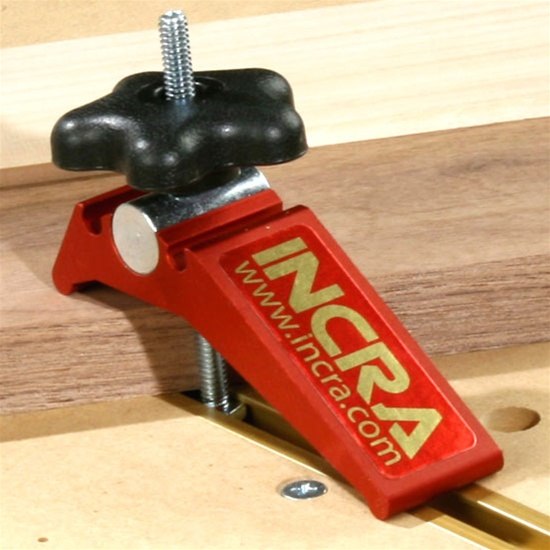 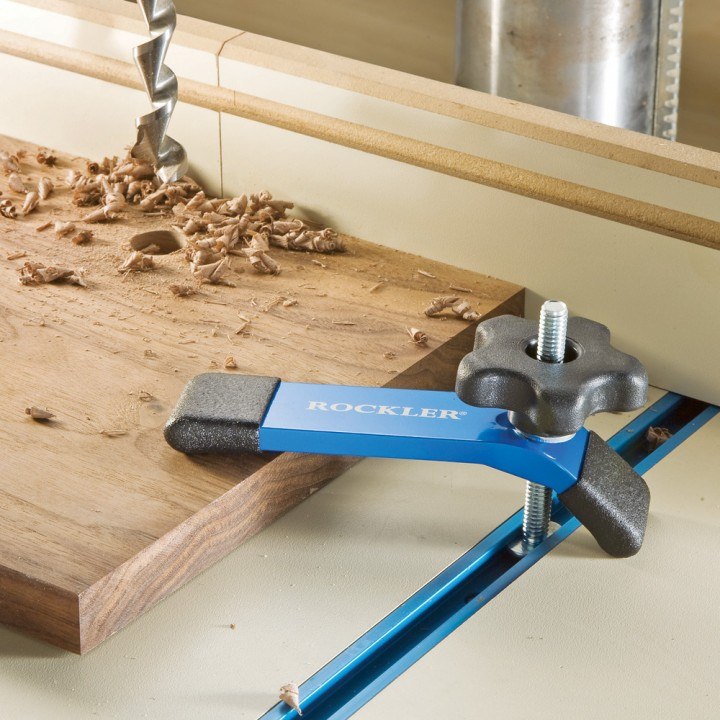 ....to more precise metalwork versions as seen on the CNC mill described earlier: 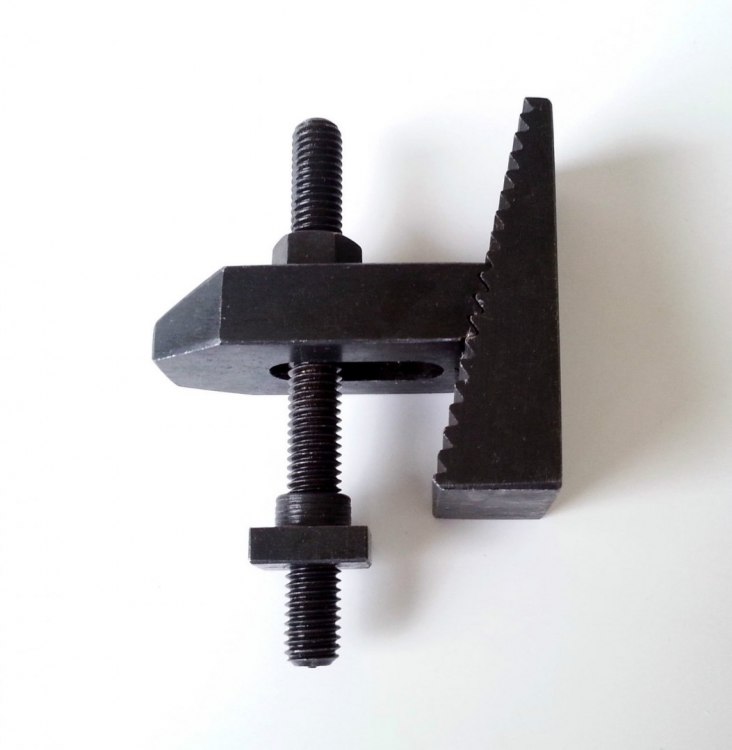 All of these work in the exact same manner whether you purchase or make your own T-tracks. Minor modifications (such as a bearing washer) may need to be added for wide wooden T-tracks, however this is pocket change.

Balance clamps are not that difficult to fabricate from wood you have laying around the shop and basic store-bought hardware. Regardless of form, the idea is the same. Clamps fitted with a mating T-slot nut slide into these tracks allowing clamping locations to be situated flexibly around a workpiece. Unlike simplistic use of F-clamps, the workpiece no longer has to straddle the edge of the bench or be restricted in access.

Manufacturers of T-tracks and metal milling accessories have all kinds of novel ideas for workholding solutions. A particularly notable one is the Shop Fox cam clamp: 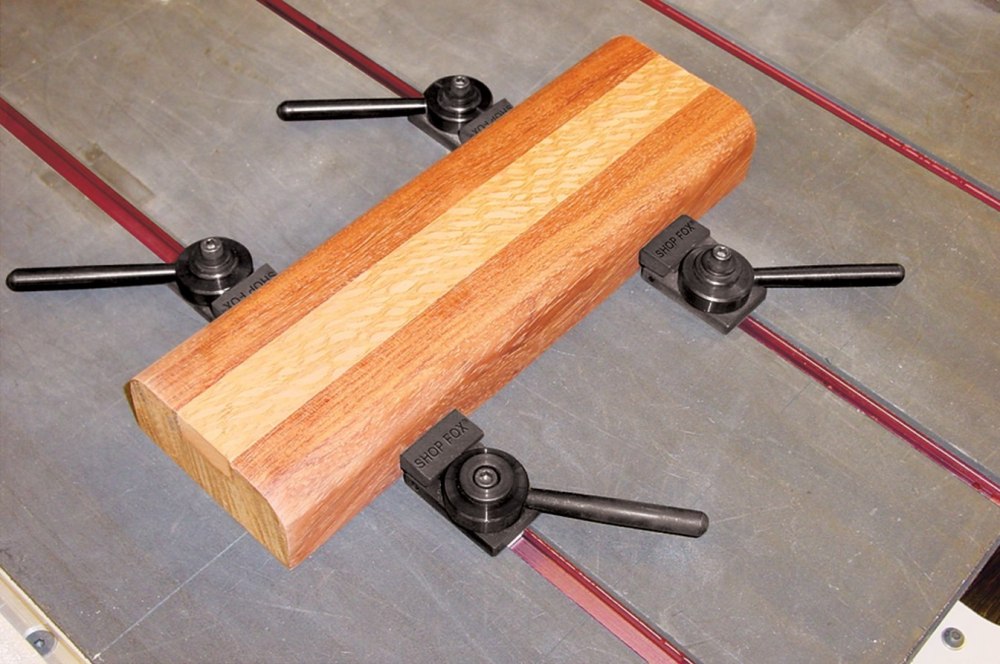 This cam clamp design was originally intended for machinists and milling, however they serve as an excellent low-profile workholding method for our dastardly purposes. The offset of the cam is fairly small, but develops a high level of clamping pressure with little effort.

We briefly touched upon the use of bench dogs and dog holes in the previous article in this series. At their most basic, a bench dog consists of a wooden, plastic or metal peg fitted into a series of holes on the surface of the bench. Normally these rows correspond with a tail or end vice fitted with dog holes. 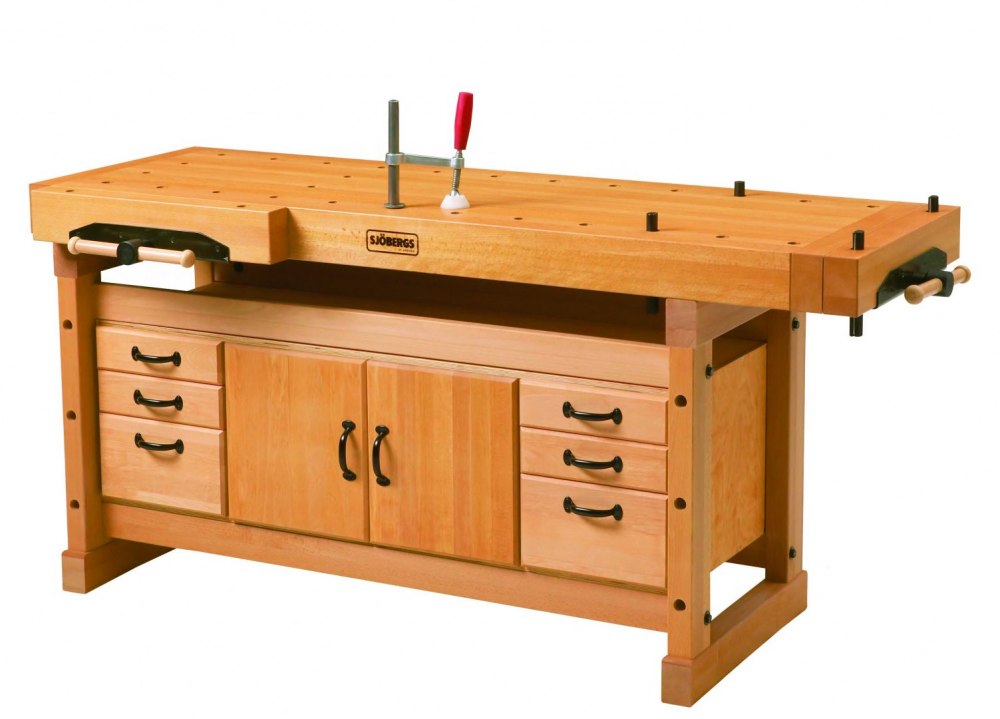 This Sjöbergs bench is typical of a bench designed for working on the ends, edges and faces of flat workpiece. The dog holes are perfect work securing a flat workpiece to the bench by cinching it between the vice dogs and the bench dogs. Traditionally, these were used to secure work for handplaning operations such as surfacing.

This workholding strategy offers an excellent method of holding a workpiece flat to the bench without clamps intruding onto the surface; perfect for flat routing operations such as pickup cavities, etc. Unless carried out whilst still rectangular, securely holding a guitar-shaped workpiece may require a little thought into dog locations and judicious use of shaped cauls. Another reason to hold onto the scrap you cut away from your blanks!

Bench dogs can be ridiculously simple; a wooden peg and a hole drilled through the bench top is all you need to get your horse in the race. The dog holes themselves however, can be used for a variety of clamping devices similar to T-tracks. Standard round dog holes (3/4" or 19mm) have a variety of devices for holding workpieces available....again we are at risk of encouraging clamp bloat....

The most basic of these is the holdfast. These are hugely traditional, and more in line with the pre-industrial woodworker. It takes all sorts. A holdfast is a ductile metal hook resembling a shepherd's crook. They have a long shaft slightly smaller in diameter than a dog hole with a flat pad on the very end of the hook. They are simply dropped through a dog hole with the pad on the workpiece, and given a whack with a wooden hammer on the head (1). This causes the shaft to cant in the hole, wedging it in place. The ductility of the metal also causes the hook to bend outwards slightly, applying pressure to the workpiece via the pad. Releasing the holdfast simply takes a second whack with the mallet on the back of the head (2). 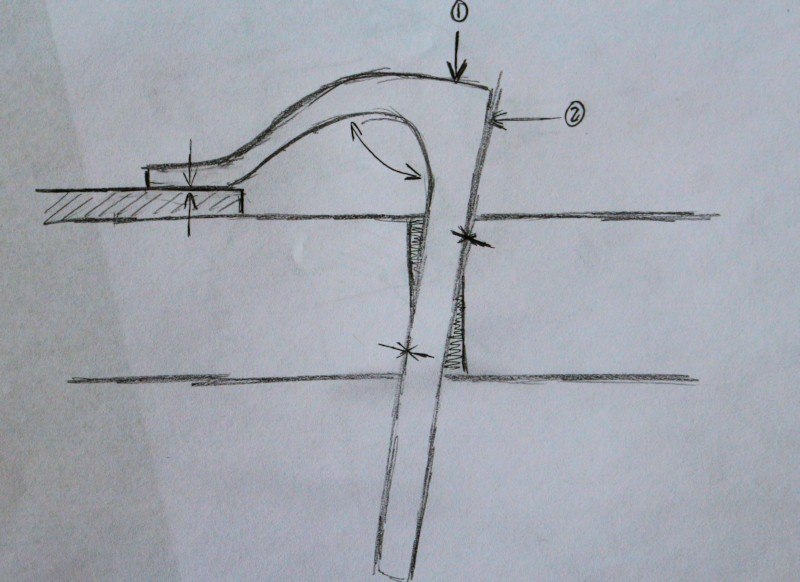 Like many traditional styles of work retention, holdfasts were designed for the needs of traditional woodworkers. Holdfasts can be repurposed to serve our needs, however purchasing a good quality forged holdfast often costs more than modern alternatives. Somewhat of a vanity purchase for the anachronistic or technologically-averse, you might suspect. Veritas/Lee Vallery produce a fine alternative in the form of a cam-action holdfast: 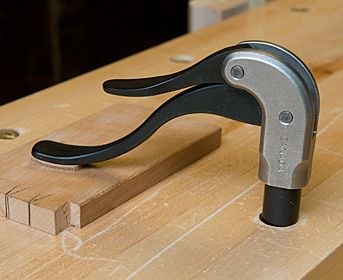 This fine improvement on the traditional holdfast doesn't rely on flexibility to hold the workpiece in place, and is far kinder on your workbench since you don't need to whack the clamp to locate or free it.

Sjöbergs offer a very similar idea based on a hybrid of an F-clamp and a holdfast: 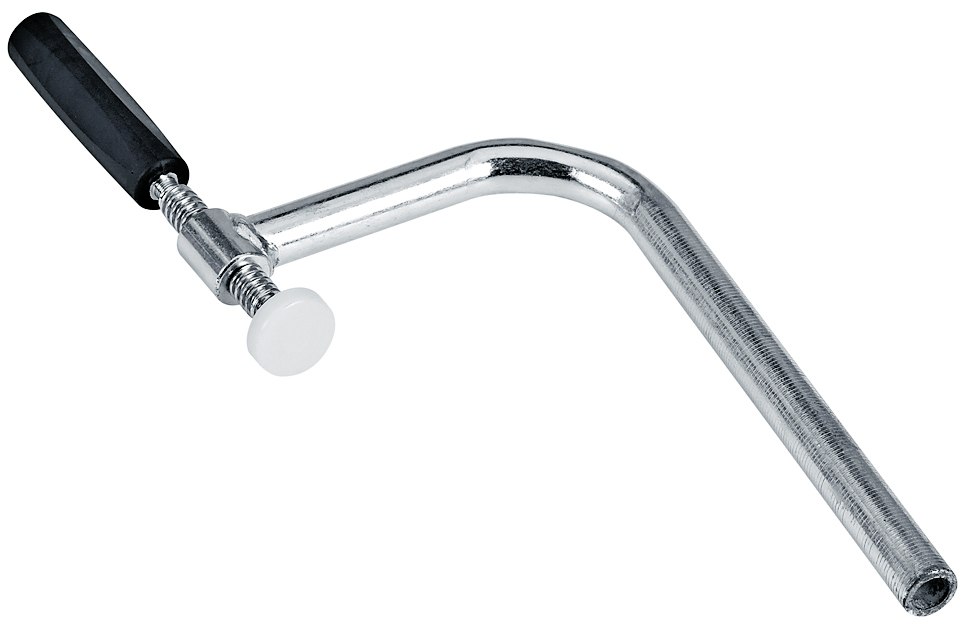 Like a more traditional holdfast, these cant against the inside of the dog holes and wedge themselves in firmly under clamping pressure.

Several manufacturers also produce low-profile cam clamps or vices which locate into dog holes. Back to Veritas/Lee Valley, we have "Bench Blades": 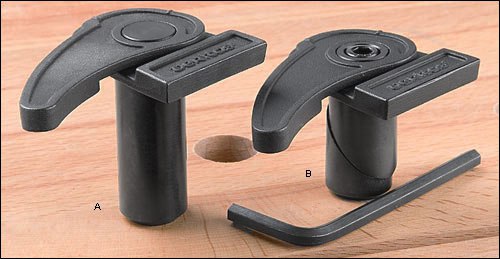 Mostly these are identical in operation to the Shop Fox cam clamps described earlier. The clamp is either simply dropped into a dog hole (A) or secured with the wedge lock (B). The cam bears onto the workpiece edge allowing unhindered access to the surface for working operations. The opposite side of the workpiece is either located against simple bench dogs or some other stop to provide the inward clamping pressure.

Variations on this theme exist, including low profile surface vises which drop into dog holes, such as the Veritas Wonder Dog and Wonder Pup: 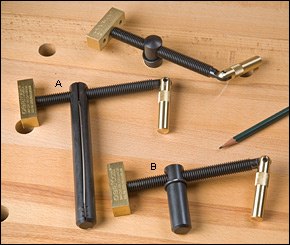 These offer a nice simple middle ground between a tail vise and dogs, and can be placed to accommodate our oddly-shaped guitars....

Writing a complete overview on all methods of clamping, manufacturers, etc. would be audacious at best, doomed to failure at worst. Instead, our objective was simply to open up the idea of different methods of workholding plus the co-dependence of bench design and how we plan to carry out work upon it.

The ergonomics of our bench - the human relationship with our work area - is vital in crafting a safe and productive environment for luthiery. Solving puzzles and creating new ways of working are skills that a good luthier picks up with experience, yet this all starts simply with manipulating workpieces and keeping them from flying around the room, or worse (as evidenced by regular foot photos over in the forums...) landing on your toes!

A bench useful to a luthier soon starts to evolve from any standard off-the-shelf bench that is fundamentally designed for hand tools. Hopefully some of the ideas, products and solutions presented will help you break from the restrictions of standard bench designs.

The third part of the series will detail a design for a simple workbench that is easily constructed, yet highly flexible in line with a luthier's requirements. We look forward to hearing your thoughts in the comments below!