Over the course of the last couple of weeks we have explored the practicalities of using a modestly-sized CNC router for guitar building applications, and performed the necessary setup procedure when using the CNC machine under LinuxCNC. In this weeks' installment we will write and analyse a small G-Code program, and then use this file to drive the CNC machine to check its accuracy. Lets get started...

After going through the StepConf Wizard to set up our CNC router LinuxCNC will have created a shortcut on the desktop to allow us to run the CNC machine with our configuration. Double-clicking this icon will launch Axis, the default graphical user interface. Upon opening Axis the user is presented with a 3D representation of the physical machinable cutting area of our CNC machine. A default test cutting program is loaded on startup featuring the LinuxCNC logo and a small cone object in the preview window represents the position of the CNC cutting tool. The maximum bounds of movement of the CNC machine, as defined by StepConf Wizard in part 2 of this series, are represented as a rectangular cuboid object with dotted red edges. In our case the cube is 200mm wide, 300mm long and 50mm high, which aligns with the maximum limits of travel of our particular CNC router. 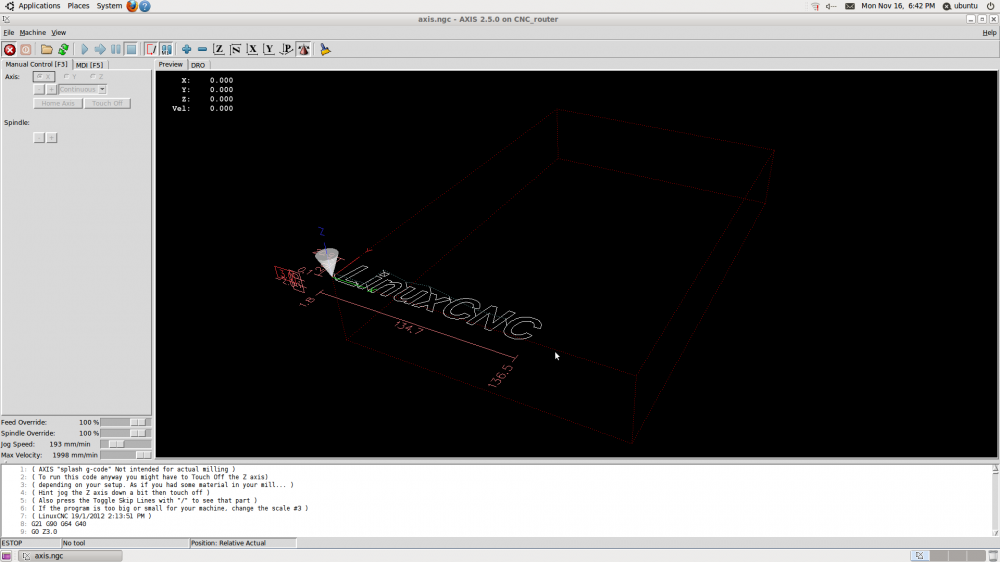 Take a fresh piece of plywood, MDF or other flat material at least 150mm x 150mm and secure it to the table. Fit a small engraving cutter to the spindle and tighten the collet. Open a blank text document using whatever text editor you prefer to use on your system and enter the following G-Code. If your machine is set up for millimetres use the left column. If you’re running your machine in inches use the right column:

Save this file as ‘100square’ with the file extension ‘.ngc’ to a convenient location on your computer.

Using the metric version, let’s break the code down into its components:

Many G-Code commands and variables are ‘modal’ and remain in effect until another contradictory command is executed. As an example the above program could be re-written for maximum modality and provide the exact same output. The drawback is that it can become difficult to read to the user, as much of the detail is removed: 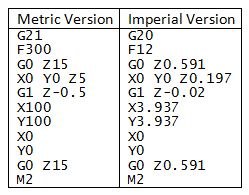 You will note that the F300/F12 feed rate that originally appeared at the end of each G1 line now features at the top of the program. This is because each successive G1 command will utilise the last known feed rate, which is now defined at the beginning of the code.

Returning to Axis it can be seen that on start-up the location of the cutting tool is exactly at the upper-left corner of the machine limits of travel (X=0 and Y=0) and the tip of the cone is positioned at maximum height (Z=0).

This corresponds with the home position that was defined earlier while running the StepConf Wizard. In reality the cutting head could be physically located anywhere within the limits of travel, as is the case below: 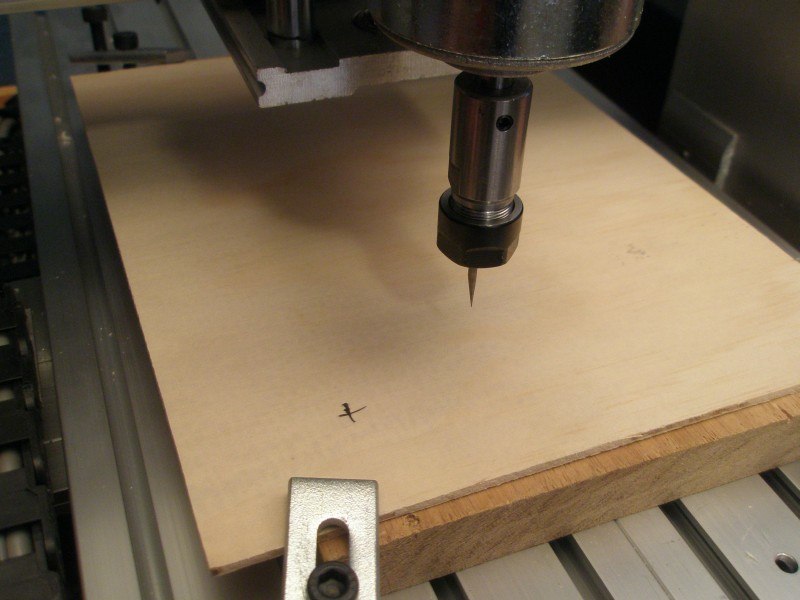 Before the CNC router can be operated it needs to be returned to its home position. On more advanced machines this procedure can be automatic, with the axes seeking their home positions when the user commands the machine to home itself. In our case we will home the machine manually.

Click the File open button or press <O>, navigate to where you saved the G-Code program we created and load ‘100square.ngc’. You should be presented with the following in the preview window: 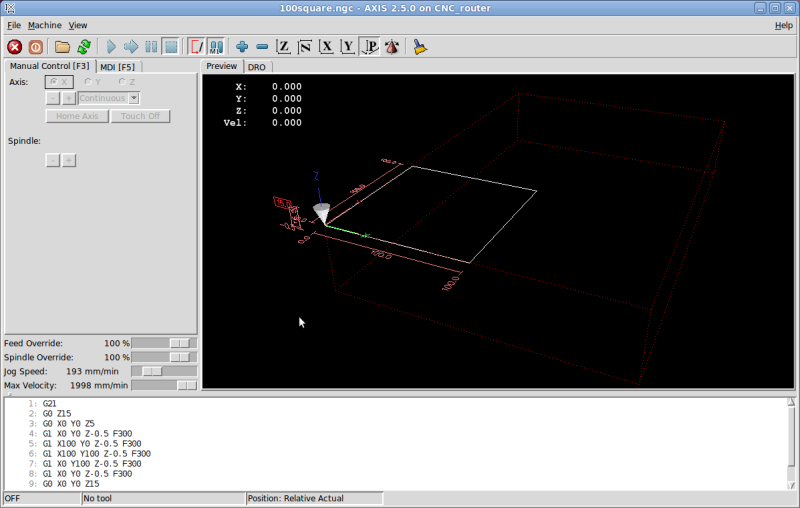 Check the Emergency Stop pushbutton on the CNC router control interface has been reset, and press <F2> or click the ‘Toggle Machine Power’ orange button on the top menu bar.

A number of greyed-out options under the ‘Manual Control’ tab become active. With the CNC machine connected to the PC and powered-up, use the four arrow keys on the computer keyboard to move the machine around the cutting bed in the X and Y directions. The <page up> and <page down> keys will also move the Z axis up and down. Manually moving the cutting head around the table is called jogging. As the cutting head moves around the display updates the position of the cone object and shows the path taken as a solid yellow line. In the below example the cutter has been jogged towards the front edge of the table by 31.739mm (Y axis), across to the left 21.547mm (X axis) and up 20.545mm (Z axis).  These values appear in the upper-left corner of the display; the Digital Read-out or DRO: 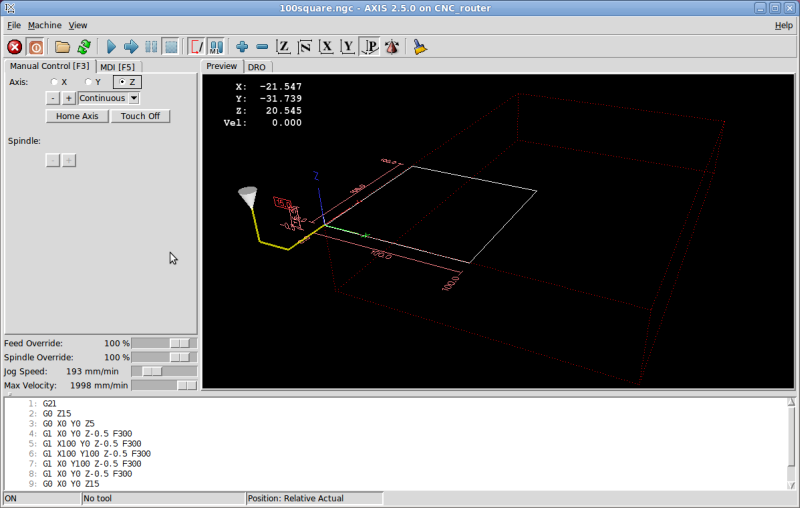 The CNC machine, having now executed the above moves is sitting with its cutting head physically home, but well away from the workpiece at a distance which does not yet correspond to the values shown in the preview window: 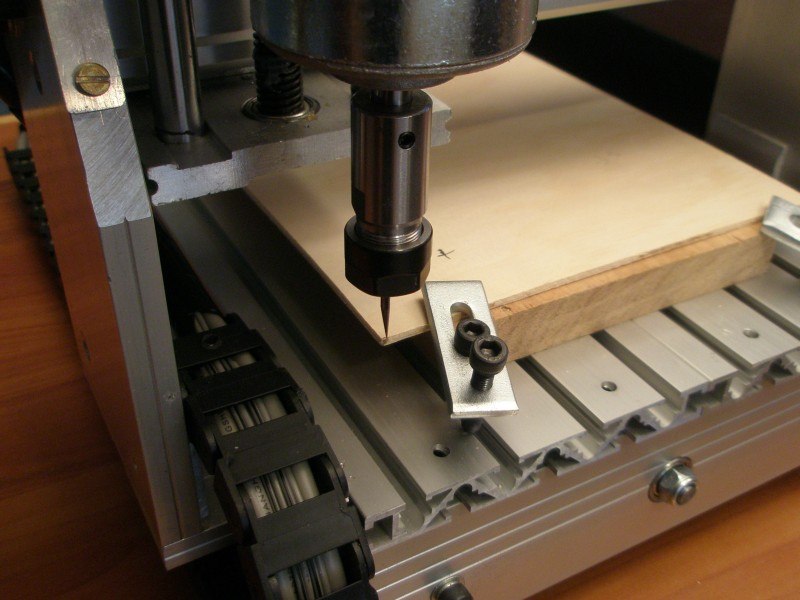 Now that the CNC machine itself is at its home position Axis needs to be told that this is now the position that corresponds with the upper-left corner of the red dotted-edged cuboid object, ie the 'soft' home position. The ‘Home Axis’ button is then clicked for each of the X, Y and Z axes. As each axis is homed the DRO updates to indicate that the associated axis is at position ‘0’ and a

symbol is added next to the readout. Note also that the position of the cutting head in the preview window returns to the upper-left corner of the work area box to reflect the fact that it has now had its home position reset. 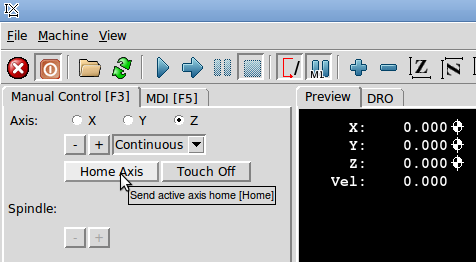 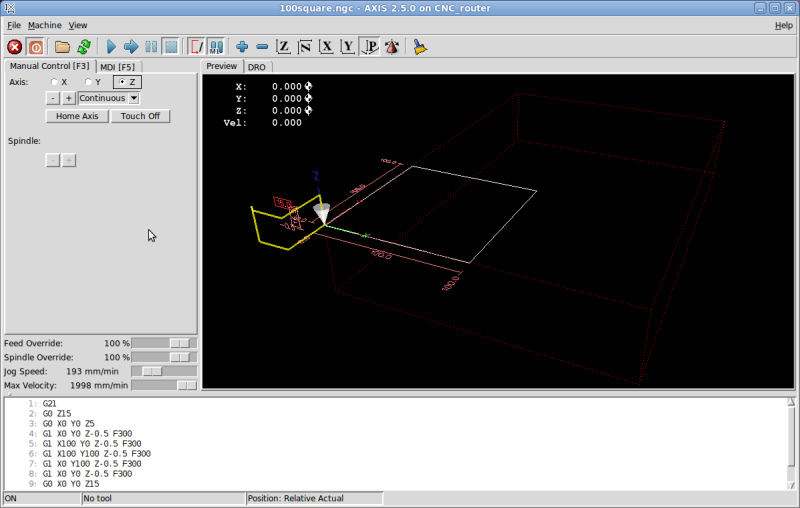 The second step to perform before we can run a job is to ‘touch off’ the cutter against the workpiece. This is the process of setting the position of the workpiece relative to the home position of the machine. With the CNC router homed the job can be run, but unless the tool is touched-off Axis does not know where the workpiece lies relative to the tip of the cutting tool. In the above example the square object looks as if it sits bang-up against the top of the limits of travel, when in actuality the workpiece is about 25mm below the tip of the cutter and a few inches inside the edges of the table. Without touching-off, at best the machine may run the job with the tool completely missing the workpiece. At worst the CNC may try to drive the cutting tool through the workpiece into the table, ruining the job, damaging the table and destroying the cutting tool.

To touch off manually jog the cutting head to the point at which you require the origin of the job to be positioned on the material. In the below example the cutting head has been jogged right 34.071mm (X axis), jogged away from the front of the table 42.856mm (Y axis) and jogged vertically down by 22.156mm (Z axis) to place the tip of the cutter at exactly the spot where the job origin is required to be. 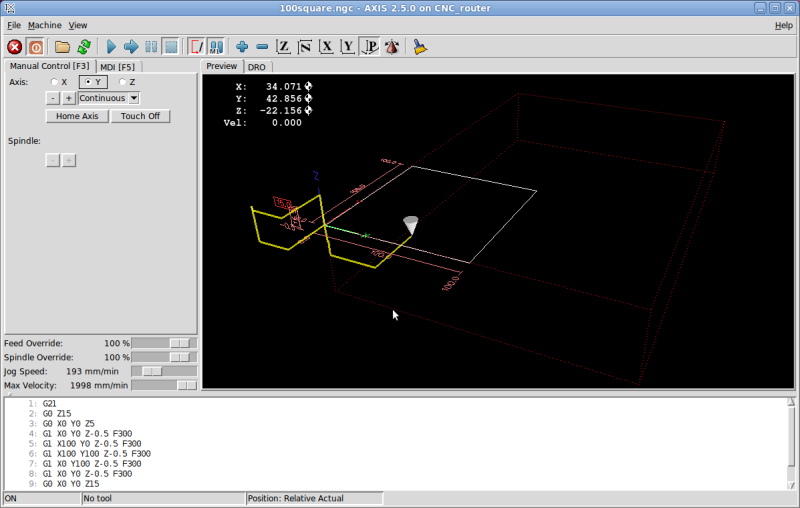 In our case I have marked the workpiece with a cross to indicate where I want the square shape to begin: 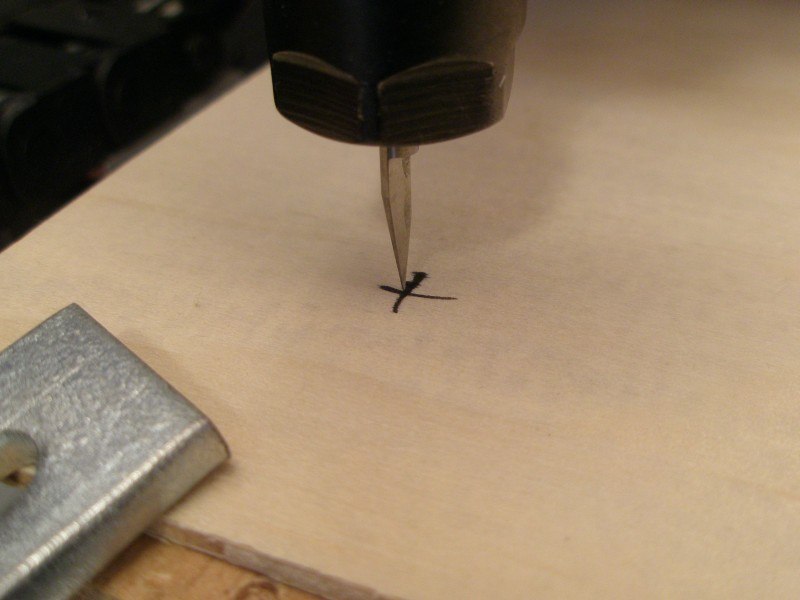 As each axis is moved into position click the ‘Touch Off’ button. A dialogue box opens to allow the user to manually specify an additional offset to the workpiece relative to the axis being touched off, but in most cases it is sufficient to use the default of 0. 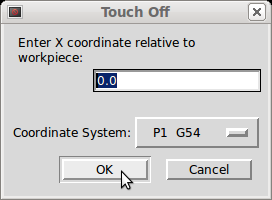 After touching off the axis the DRO updates to show the position of the cutter has now been reset to 0. Note also that the square object has now moved 'deeper' into the red cuboid object that defines the limits of machine movement. 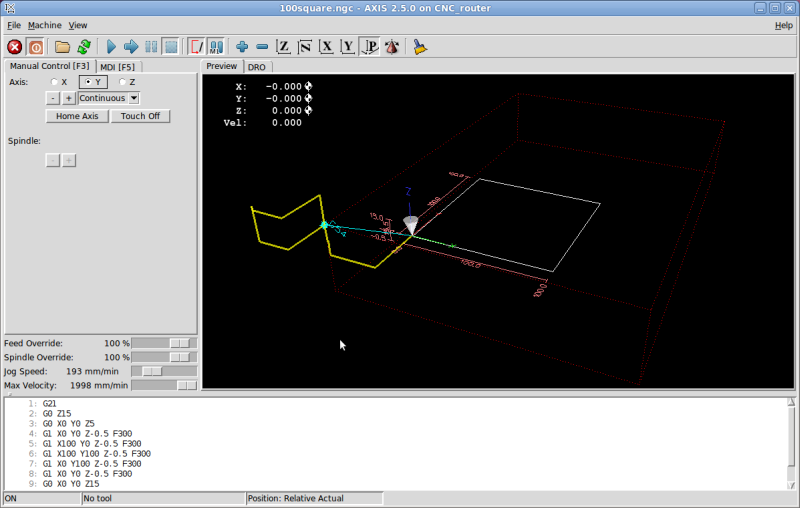 Click the ‘Clear Live Plot’ button or press <CTRL-K>. This clears the preview window of any paths that were created by the manual jogging of the cutting head. 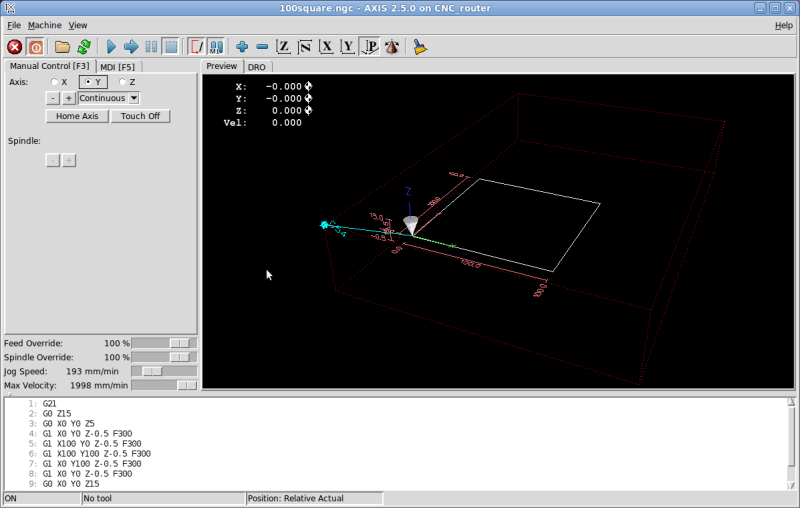 Manually jog the cutter away from the workpiece a few centimetres. With the machine homed and touched-off we are now ready to run the job. 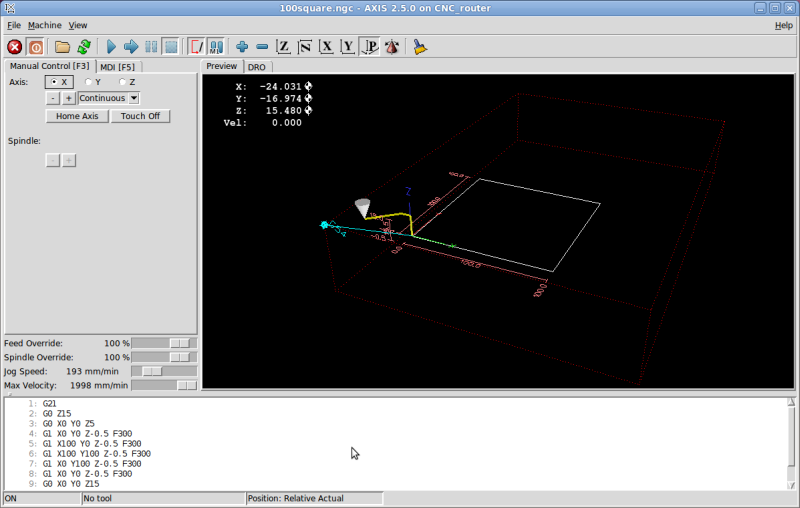 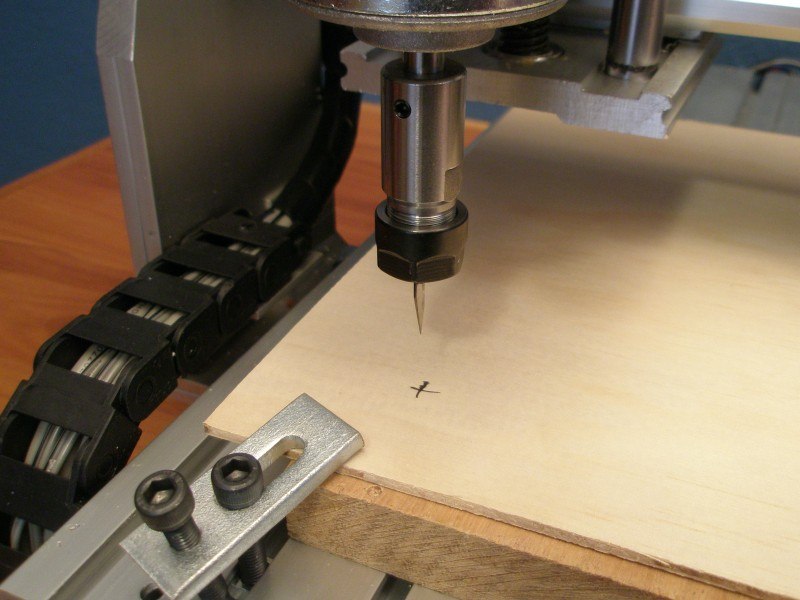 If the CNC machine has a manual spindle control turn it on and set the spindle speed appropriately. Click the blue ‘Play’ button or press <R>.

The CNC machine and preview window will now begin stepping through the code and manoeuvring around the workpiece. Note that the movement of the cutting head in the preview window is indicated by pale red lines for slow cutting motions, and for rapid jogging motions between each cut the tool follows the cyan dotted lines without leaving a trail. 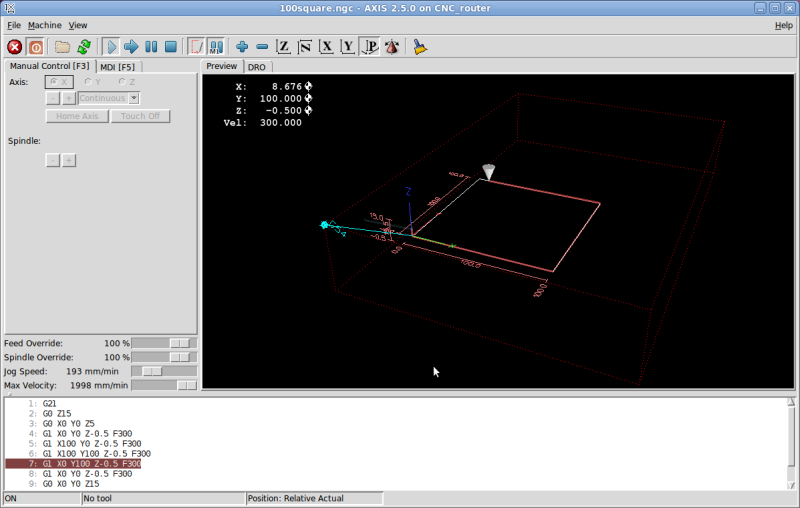 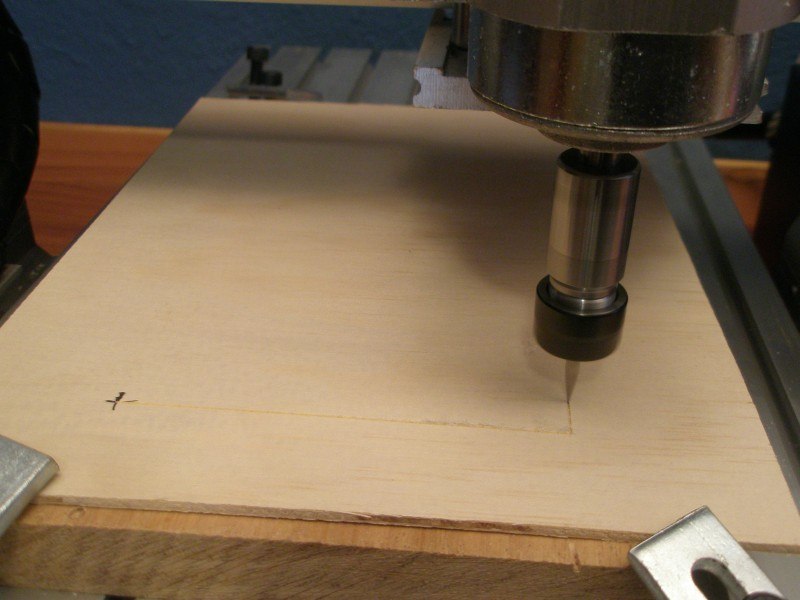 After a few minutes the program completes and the cutter retreats away from the workpiece to a safe distance where the spindle can now be turned off. If all things have gone to plan you should now have the 100 x 100 square engraved on your workpiece. 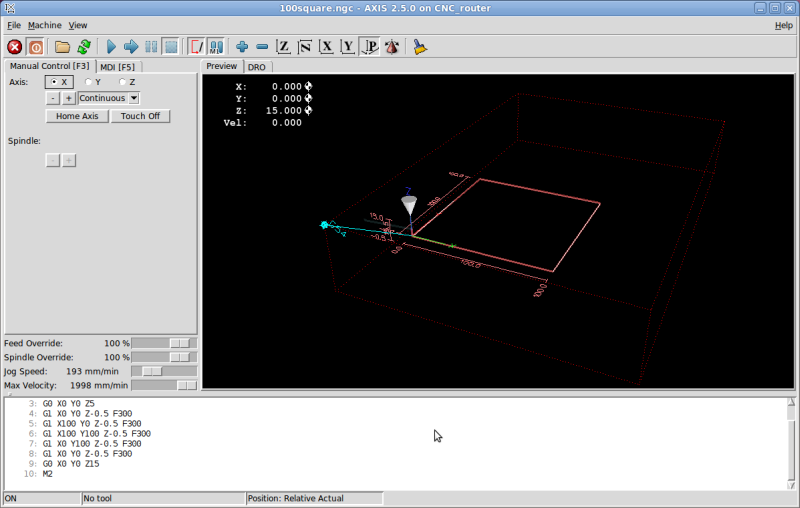 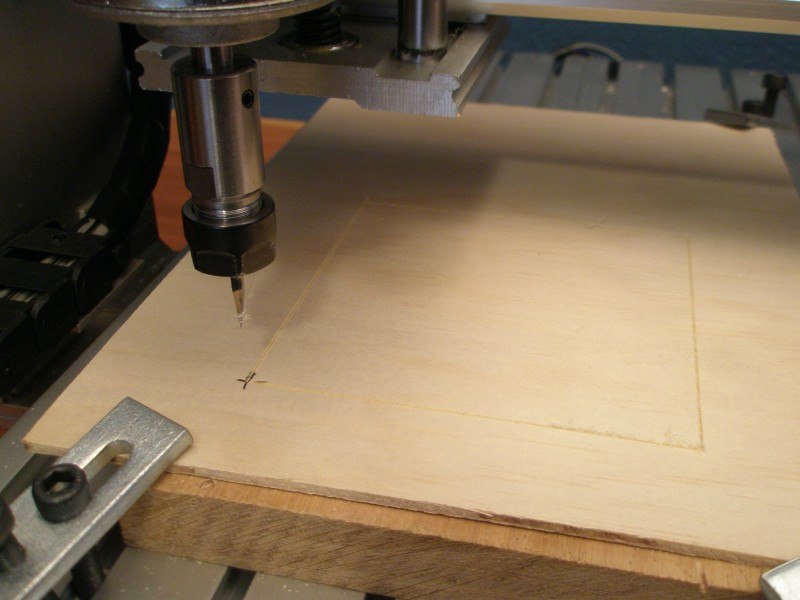 Take a good quality ruler or Vernier calipers and measure each of the four sides of the engraved square and confirm that they each measure 100mm. 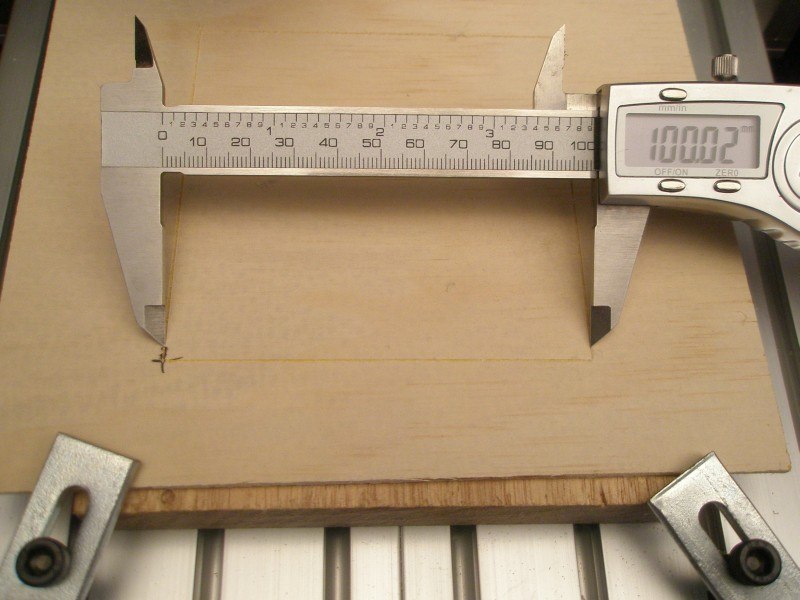 If the sides of the square do not equal 100mm then some tuning of the configuration file must be undertaken to correct this error. The most likely culprit is that the lead screw pitch has been incorrectly set. The correction factor to apply to bring the axis scale back to the correct value is: