Experienced luthiers worldwide still scoff at the "lowly" jigsaw when it comes to making instruments. The real question is as to whether this is justified, and more importantly....why?

Handheld jigsaws are cutting tools consisting of an electrical motor and reciprocating saw blade. The blade can be exchanged for various types and gauges for cutting other materials such as plastic or metal in addition to wood. In the context of woodwork, jigsaws are used to cut through sheet materials, kitchen worktops or lumber depending on the machine/blade capacity.

When I first decided how to learn to make my own guitar, the general consensus was "oh, you should never use one of those". For the most part this was correct, however a decade later there are justifiable reasons why this might no longer be the case.

Why have luthiers always been so dead set against jigsaws? Simply, a lack of accuracy and poor capability. Jigsaws have an enduring reputation based off poor results from inappropriate design characteristics for an incorrect end use; the reciprocating blade is supported at one end only, leaving only the stiffness of the blade and retaining mechanism to keep it running true or going where it is intended to go.

Improvements in blade quality, retention/guiding mechanisms and electronics make this far less true of modern jigsaws. Like virtually all common DIY tools an intensely competitive marketplace has forced evolution in quality and capability. Comparing what you'd find off the shelf ten years ago demonstrates a night and day difference; your money gets you a lot more tool, plus the selection is far wider. Even the best jigsaw tool 10-20 years back would have a hard time competing with the average tool on offer now.

Blades are made from more durable and stiffer metals, so flex less. Tooth geometry has been designed to be sharper, cutting and ejecting waste efficiently. Guiding mechanisms keep the blade running where it is supposed to. Control electronics prevent the tool bogging down in the middle of tough cuts. Gearboxes have added pendulum motion (also known as orbital or elliptical cutting action) to help cut through thicker, harder workpieces faster with less hanging up.

So does this change the status of the jigsaw? Does the increase in capability and reliability bring the lowly jigsaw back into the fold of the luthier's daily tooling? Not quite. The workshop of luthiers that use power tools will likely be equipped with a bandsaw which will supplant 99% of the work a jigsaw might be expected to manage.

For those starting their first projects, those on a budget or simply those that won't see realisable returns by investing in larger equipment, choice is often limited to general DIY tools already on hand. Bandsaws are few and far between at this level, especially when the scope of works is limited to working in an apartment, on the dining table, on a small collapsible bench outside the garage door. Jigsaws are an adequate alternative in the absence of a bandsaw.

The huge inertia of opinion in traditional luthiery circles simply hasn't woken up to the fact that we're not working with grandpa's rusty old tool which last saw action back in the 60s. If however you are, then pop that junk back into the dusty crevice whence it came. They didn't do the job properly back then and certainly haven't aged gracefully.

To demonstrate an average modern jigsaw, I'm going to perform two simple tests on some 40mm thick Birch and Alder. The methodology is simple and practical; how accurately does a jigsaw follow a straight line and how closely can it cut up to a marked line in thick wood?

The hope is that a jigsaw can remove enough wood that a workpiece can be taken straight to the router. In an ideal situation, a router should be used as a shaping tool and only be expected to remove as little wood as possible. The more wood the bandsaw or jigsaw can remove, the easier and safer the subsequent routing will be. Esually a 1/4" (just over 6mm) is good.

For examining how the jigsaw tracks a straight line, a piece of Birch was jointed and thicknessed, then marked up on both sides with lines parallel to the edge. Cutting along a line marked on the top will show any deflection or wandering in the blade by seeing how it deviates from the markings on the underside. The jigsaw was set up to use the pendulum motion (to eject waste) and run at full speed. 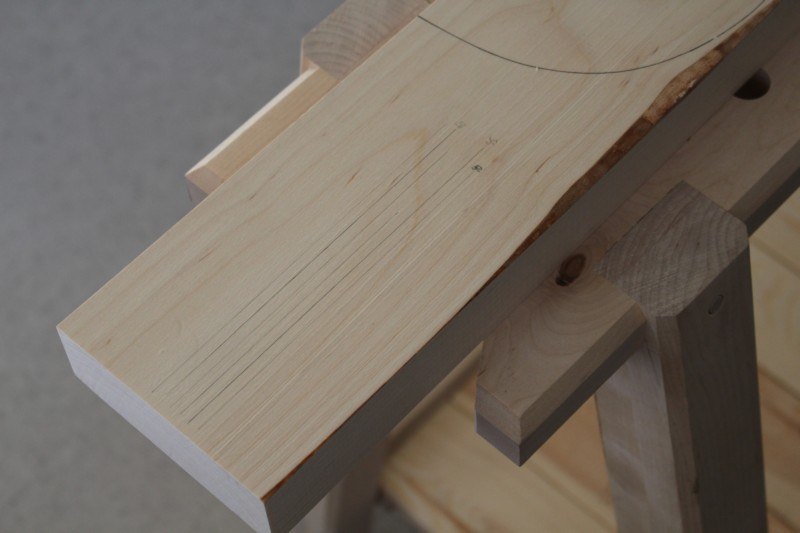 Okay, we can see here that the blade went in at an angle. You can improve the tool but you can't improve the operator....what have we learnt from this? That I didn't check the jigsaw sole setup before using it, that's what.... 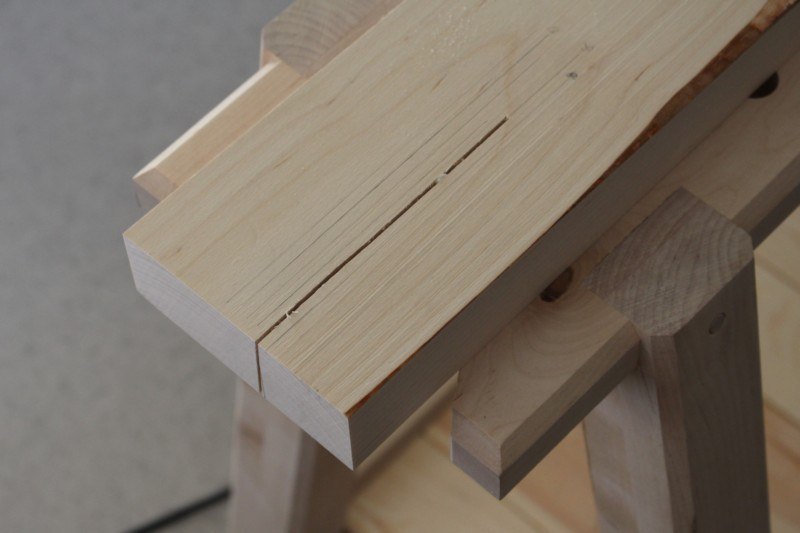 Going with that anyway shows that the blade wandered maybe less than its own width out of the other side....that's not bad despite my error.... 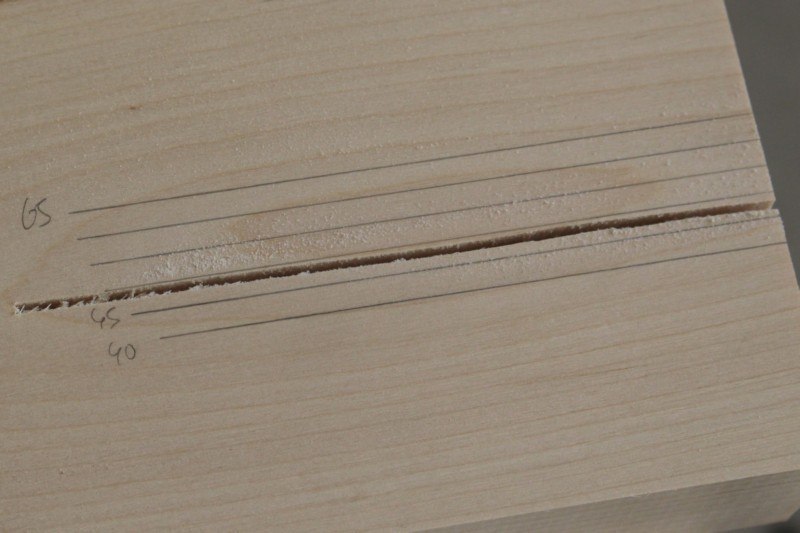 Well there you go. Operator error. (I didn't have a proper engineer's square to hand) 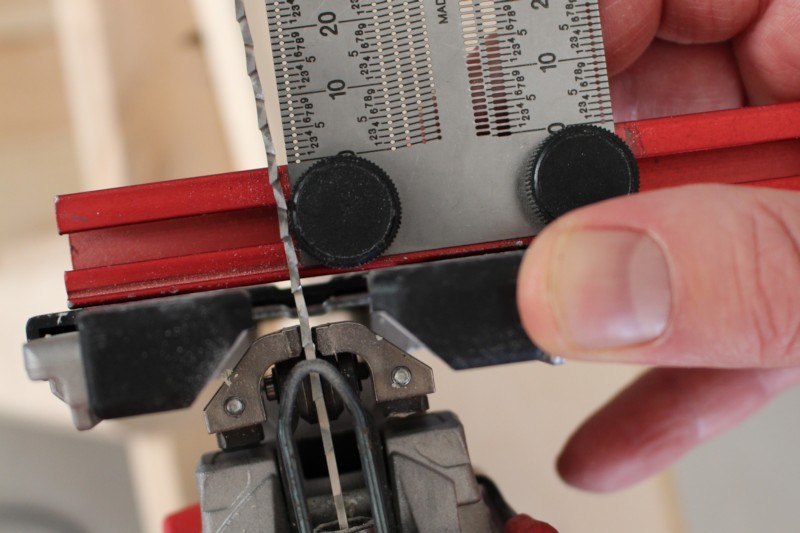 Adjusting the sole of this jigsaw doesn't seem to be a precision affair unfortunately. I'm sure that with a bit more patience it could be teased into perfect alignment, however that curve in the blade isn't going away anytime soon. 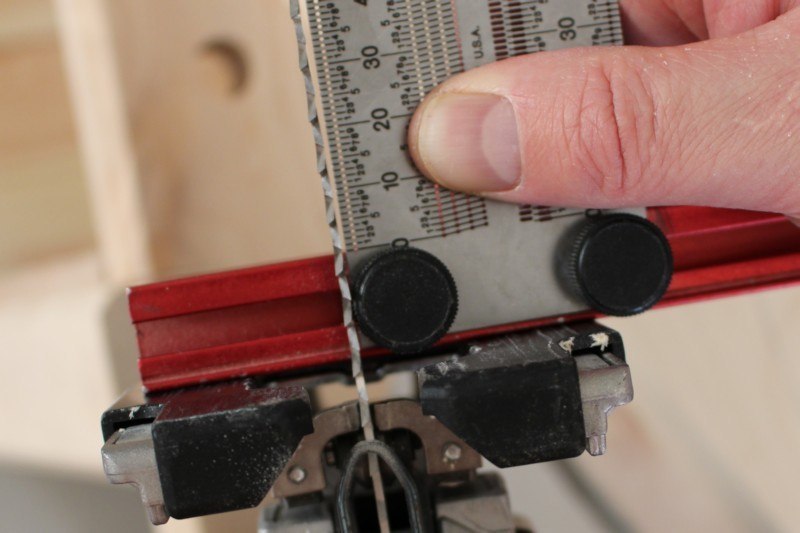 Let's try this again and just bear those factors in mind....

Okay, a far better entry; the blade went in pretty much straight. That's a good start.... 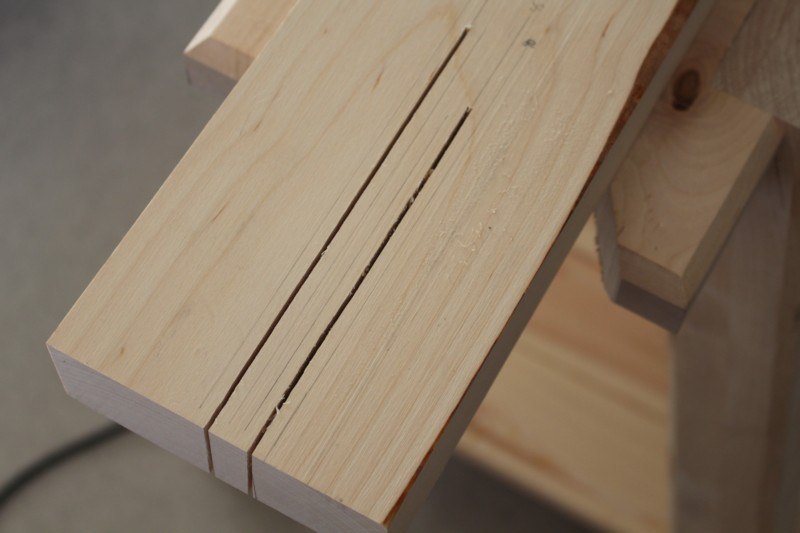 ....about 2,5mm of deviation on a straight cut. It's workable. For a luthier, the next job that workpieces see after this is usually routing. As long as the tool can remove enough material so that the router doesn't have to, we're good. It looks like the curve in the blade (no spares on hand) is causing a progressive wander as the cut goes on....Maple and Birch are pretty punishing woods at these thicknesses of course.... 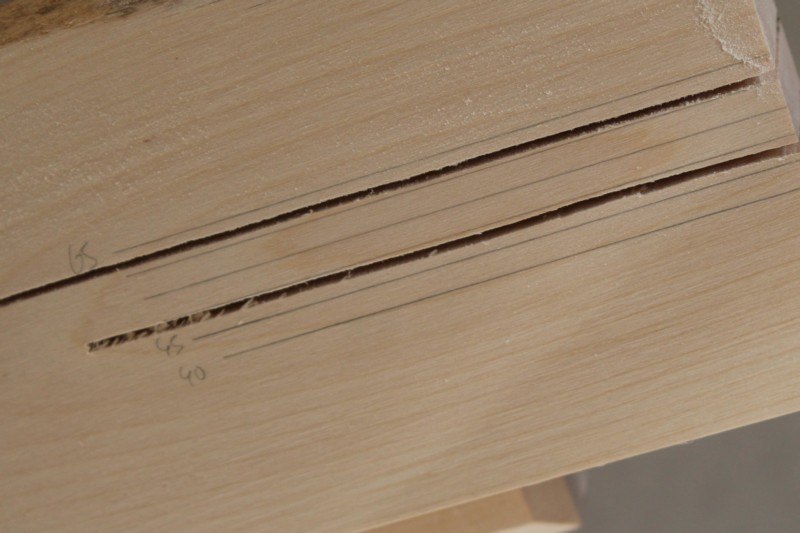 Time to do some al fresco luthiery on an actual workpiece. This is my Lancaster design (CAD plan available here!) in black Alder. As with the previous test, the design has been drawn on both sides to better examine blade deviation in both straight and tighter curves. 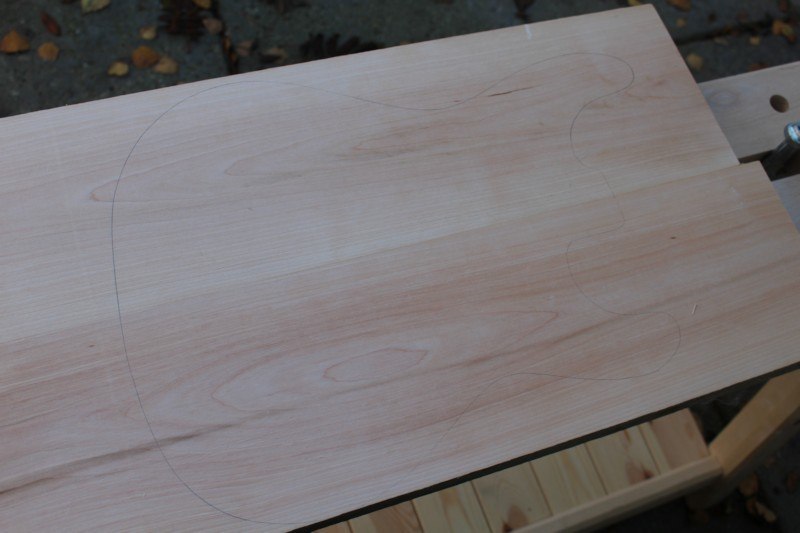 The first cut went halfway before the jigsaw started to cough; likely the motor brushes need reseating. I expected problems like this, since the jigsaw hasn't entirely been taken care of. Thankfully it's not mine.... 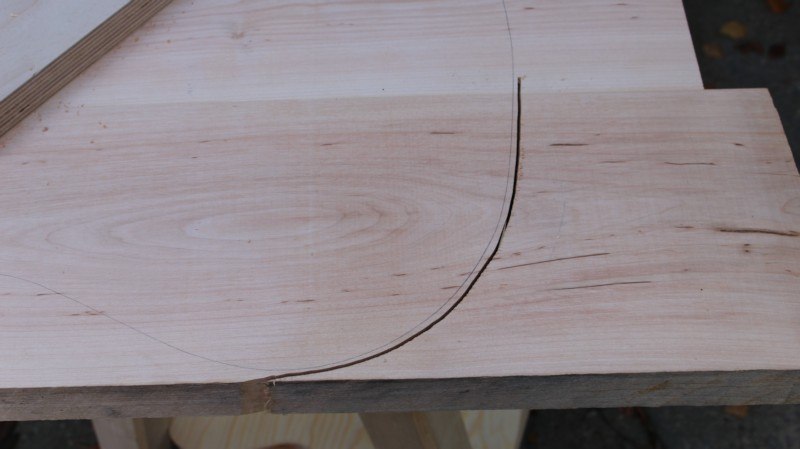 Well that's interesting....a little close to the mark! The first cut was offset by around 1,5mm to 3,0mm (1/16" - 1/8") from the corresponding markings on the underside. Clearly I was working too close to the bone here. I kept this in mind for the rest of the cutting and gave it breathing room.... 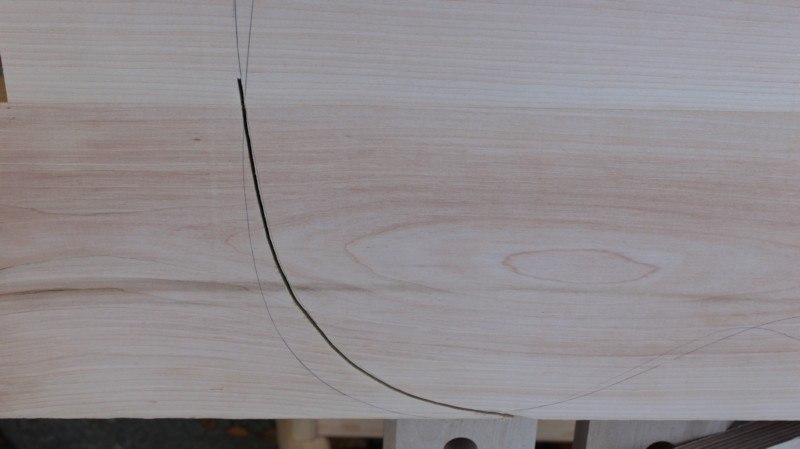 Aside from the insides of the cutaways and the spluttering motor brushes, the rest went without drama. Of note is a bit of splintering on the exit of cuts like on the lower bout. The upper cutaway was dramatic; the tight curve caused the blade to bind up in the cut and vibrate the jigsaw. For areas like this, it's wise to pre-drill an entry/exit hole (a 1" Forstner bit would work fine) rather than expect a jigsaw to manage its way around tight turns. Having this happen made me a lot more circumspect about the lower cutaway. 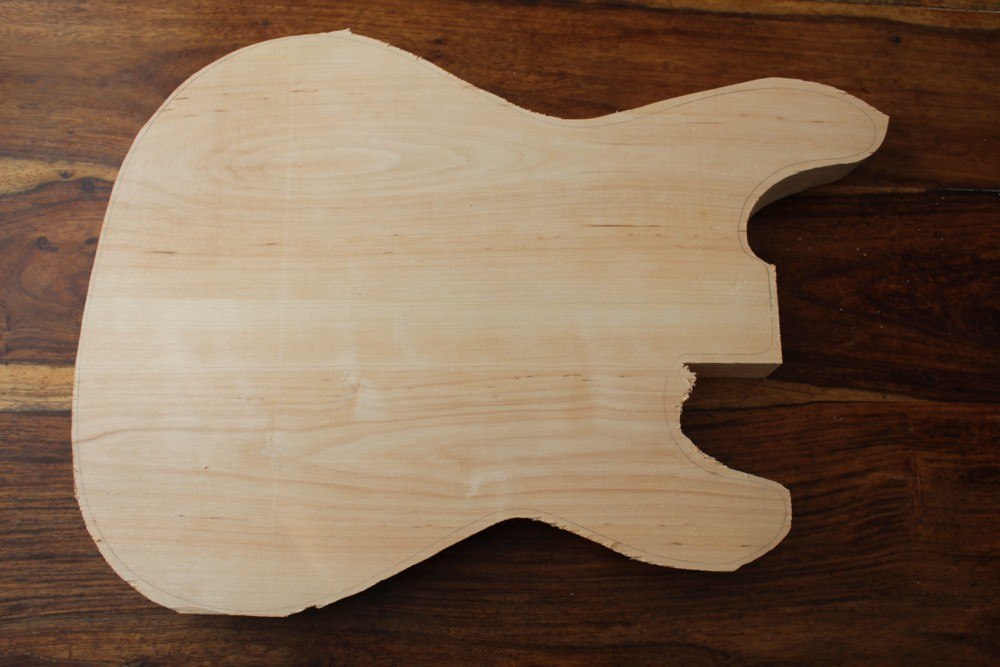 The proof of the pudding. Rough and still problematic. Nonetheless, the line hasn't been crossed at any point but did get very close to it at a couple of points. Aside from the excess at the upper horn and in the lower cutaway, this is good enough to go to routing. 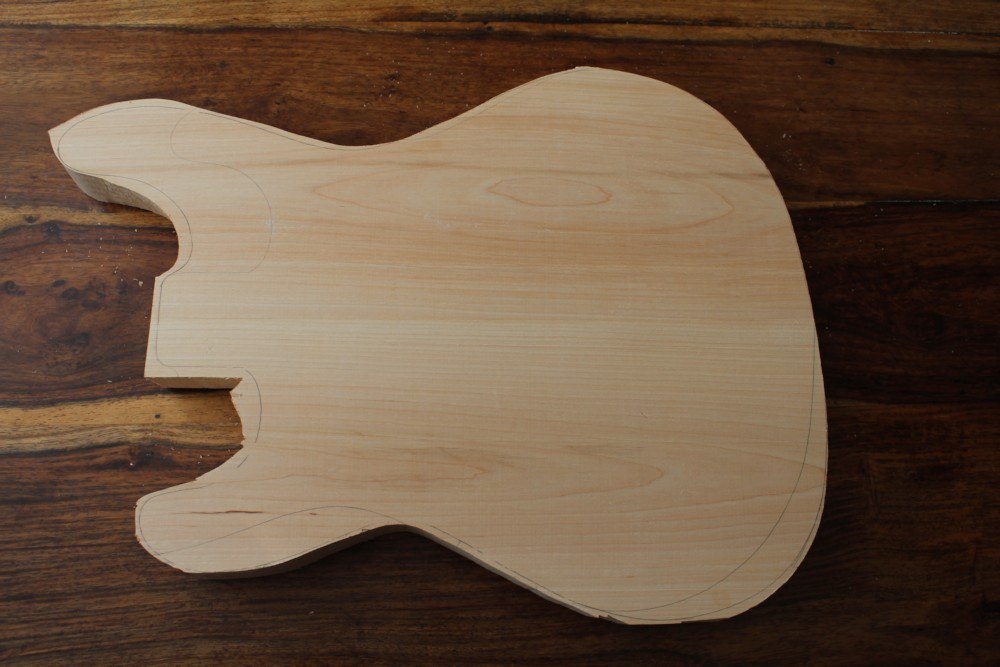 The jigsaw used was a Würth SPT 135-S, which happens to be a rebranded Bosch GST 135-CE. Specifications may be slightly different under the hood, but fundamentally they are the same. As of writing, the Bosch costs approximately €150. The alternatives I had to hand for the test was a cheapy-cheap-cheap saw at half the price which I am sure would have destroyed the workpiece as much as look at it, and an expensive Festool which simply doesn't represent the average user. This model sits adequately in the accessible "modern" DIY jigsaw bracket; a quick release blade with a guide bearing, pendulum motion, blade stabiliser and motor control electronics. I'm sure the problem with the brushes could easily be remedied if they were easier to access. 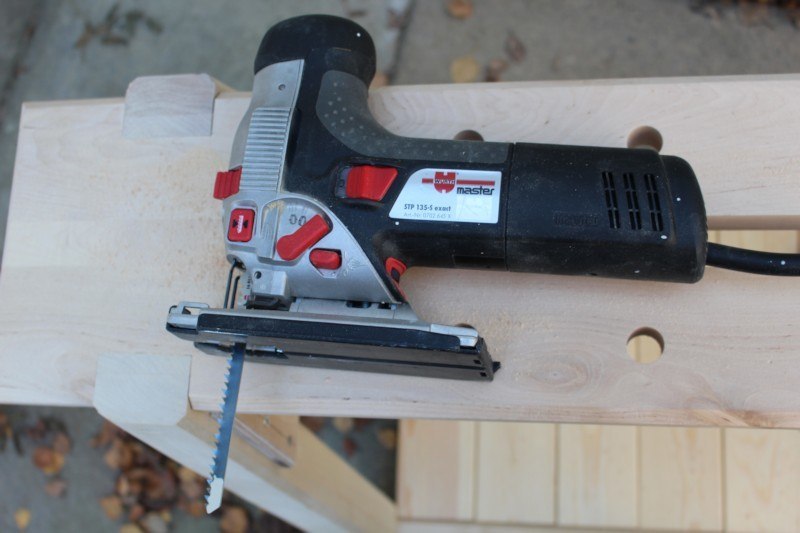 In spite of the enormous improvements made on jigsaws since I first started building, they are not challenging bandsaws as a one-on-one alternative. Guitars have far more complicated shapes in thicker materials than jigsaws are completely appropriate for. Additionally, there always felt like there was a degree of fighting for control in tight corners and balancing issues around areas like the horns. Bandsaws offer a higher level of control.

This is what it comes down to: choice. If that bandsaw is not available, a jigsaw will suffice given adequate understanding and reasonable expectations. You can make one work as long as you know why its not the best tool for the job and make allowances.

In spite of the problematic blade, flaky brushes and faulty operator the result was surprisingly good. This definitely is a world of improvement since the nightmarish old Black and Deckers of the 90s. A bit of patience, adequate work on test pieces, familiarity with the tool's quirks and an allowance for error would pay off. It's not impossible to produce acceptable results with a jigsaw that can be taken straight to the router with little to no additional cleanup.

Does a jigsaw have a place in the workshop? Maybe so. This example produced better results than my first cheap bandsaw ever did. There is however still plenty of room for errors creeping in that could write off the workpiece. Trusting this particular jigsaw any closer than 1/4" of a finished line was clearly still a bit risky. Luck seemed to be a factor. If that's good enough for your purposes then the answer is yes; a good jigsaw in good working condition is an acceptable tool.