Precision fret slotting miter boxes have been commonplace for many years now. This fully-featured and tool from Portugal-based Guitars & Woods possesses all of the features plus a capacity no other box on the market can match....

The first slotting box I bought was the basic StewMac version, well over a decade ago. It consisted of little more than an aluminium box with a template locating pin and a couple of chunks of brass to guide my blade. In spite of its simplicity and clunkiness, it worked pretty well. Since my box disappeared (long story) I slotted my boards manually, and my fretwork sometimes suffered because of it. After all, that's what the mitre box was for in the first place; manually hand-sawing slots is a slow and tiring task, needing lots of eye-squinting and concentration. Over the years, designers have evolved the original mitre slotting box design into something that works far better than my original box ever did. Time to have a serious look at mitre slotting again!

Rather than replacing my old box with the newest version from StewMac, I looked towards Guitars and Woods, a company based in Portugal. Established in 2011, G&W serve a worldwide customer base with luthiery tools, jigs, templates and supplies which equal those of the most visible US-based counterparts whilst being more affordable. I've purchased from G&W a few times both via their eBay store and directly via the website, and its saved me a fair penny every time. Despite explosive growth over the last few years, G&W are still hands-on with their customers which makes a big difference in my book.

Being "this side of the pond" myself, the G&W slotting box costs about half of what buying one from StewMac or Luthier's Mercantile would. Exchange rates, shipping and import costs makes ordering from the US somewhat prohibitive these days so how hard anything hits the back pocket can be a real deal-maker even if it the product isn't the same as more costly counterparts....so let's get this bit out of the way first. This mitre slotting box is just as good as its equivalents and has a couple of neat tricks up its sleeve if you think outside the box. That joke had to be made, believe me.

The box arrives fully assembled. The only setup work required is to confirm that the box's fences are set perfectly square so that the saw will cut at a perfect 90°. By inserting the fret saw and examining the reflection of a guaranteed-square reference in the box, the side walls are easily aligned. All tools needed for adjustment of the box (two sizes of Allen key) are included. Something that some sellers neglect with their tools.

The format of the box is most similar to the StewMac slotting box, which more or less established itself as the standard. A three-sided aluminium wall enclosure with height and width-adjustable bearing guides. A locating pin within the box engages with acrylic or metal fret slotting templates and is compatible with those available from G&W, StewMac, etc. or you can simply make your own. The intended use is to affix your fingerboard to one of these notched templates using double-sided tape, locate the template notches with the pin, saw the slot and move the template along each successive notch. Very simple and effective, and no different to my original box. 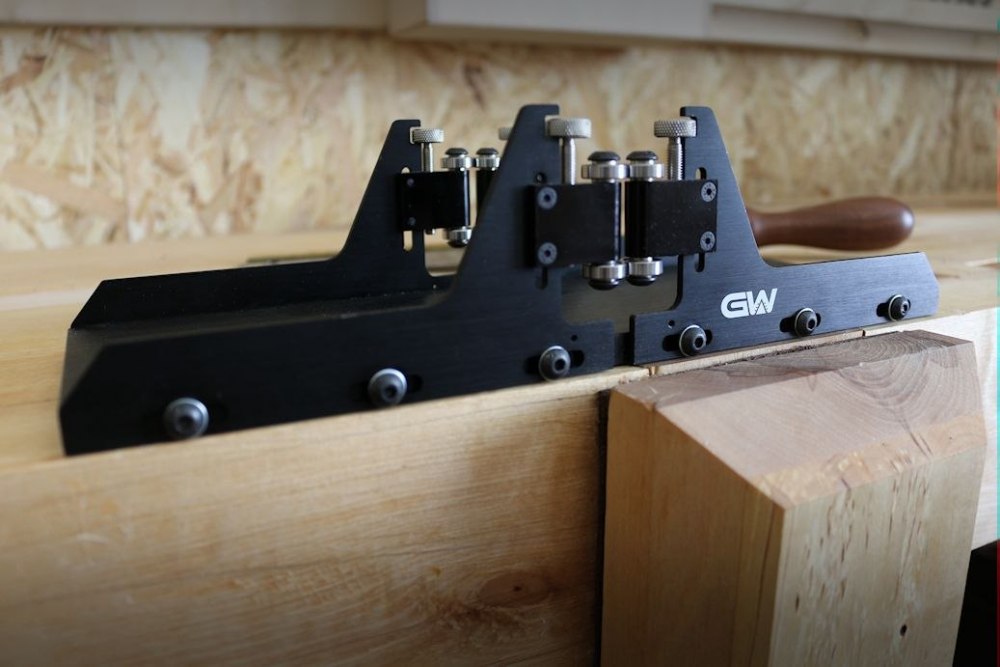 The simple set-screw retained brass guide blocks have been replaced with thumbwheel height-adjustable blocks fitted with guide bearings for the blade. The saw moves smoothly through the cut with little resistance, allowing your concentration to be on the cut and not the tool.

Depth of cut is precisely determined through the four thumbwheels located on each block; as the saw progresses through the cut, the uppermost bearings contact the spine of the saw when the set depth is reached and cutting stops. The box is compatible with any fret saw with a spine parallel to the cutting edge. I prefer the very traditional PAX fret saws made by British company Thomas Flinn & Co. however the common Japanese-style pull saws for fretting work just as well. 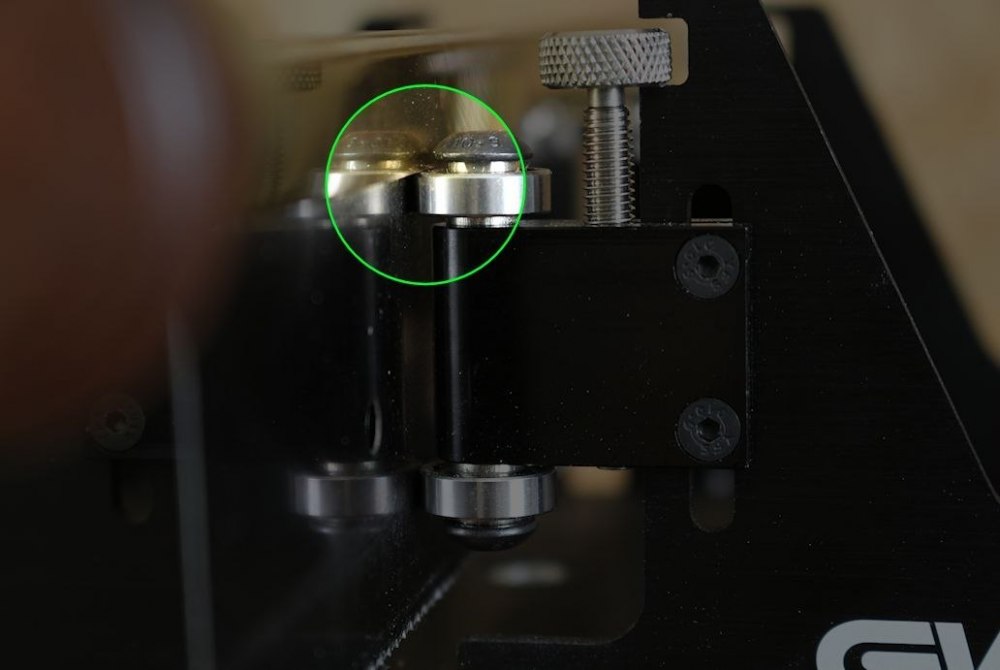 Establishing the depth of cut is also a simple procedure. The workpiece is placed into the box and the height adjustment blocks are unlocked with the supplied Allen wrench. The fret saw is mounting in place so that the cutting edge rests on the workpiece surface. Lowering all four guide blocks creates a gap between the spine of the saw and the bearing surface. This gap corresponds exactly to the depth of cut that the saw will be allowed to make. The gap is easily measured with a steel ruler or even against a piece of your fretwire. Very straightforward and intuitive. Once the adjustment has been made and all four bearings are level, the blocks are cinched together against the blade to prevent any lateral movement and re-tightened. Done! 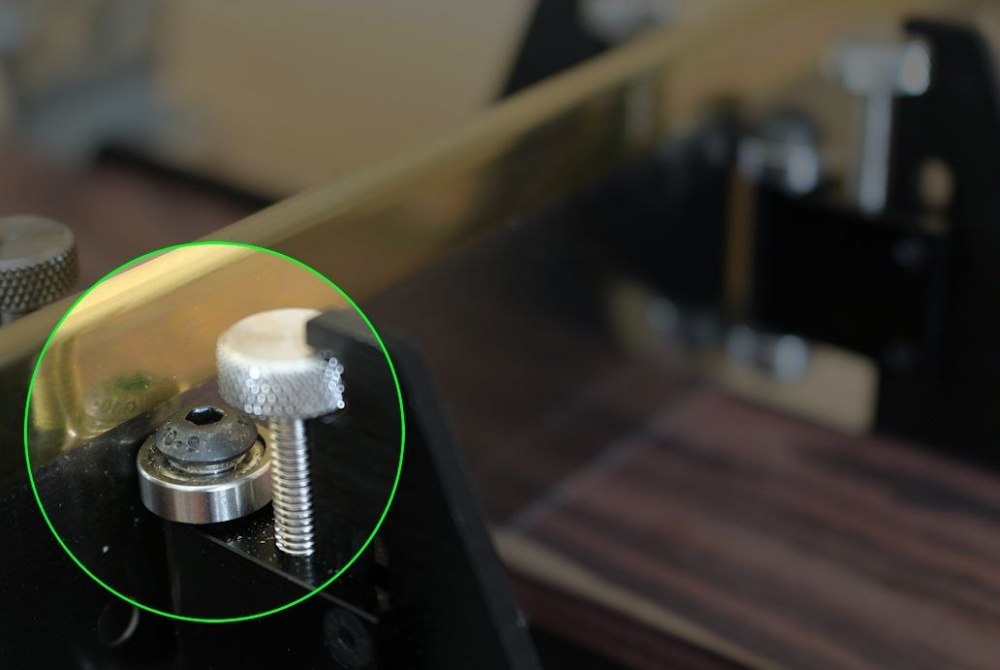 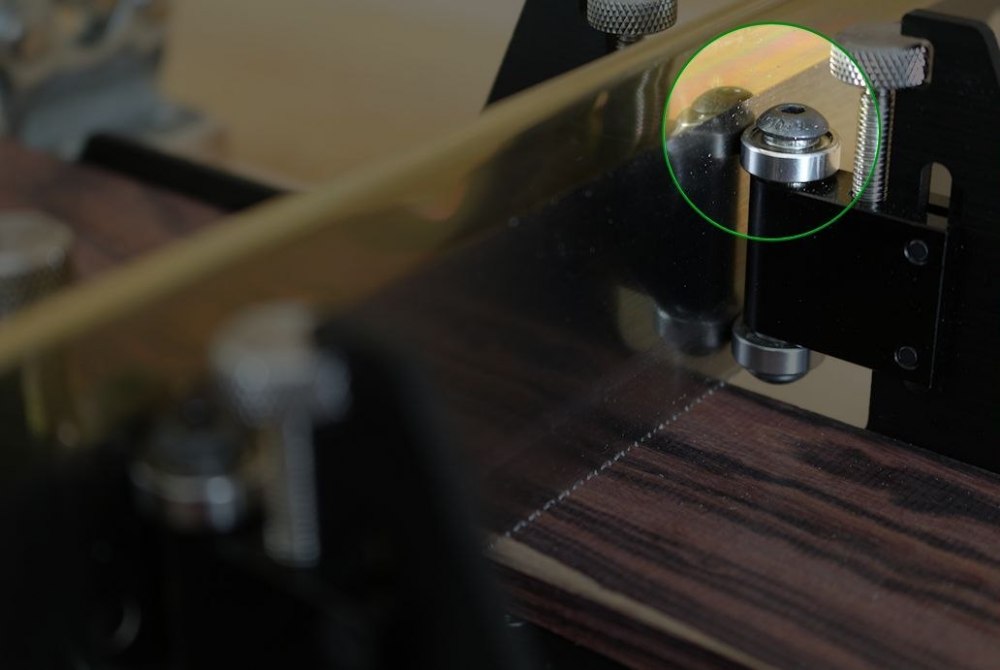 Drilled and countersunk holes in the box allow it to be mounted onto your bench or onto a larger base. For my own part, I mounted the box onto a wider support board with a flange for retention by my bench's leg vise. A pair of toggle clamps allow the workpiece to be retained without impeding work visibility. Magnets glued into a spare area on the box allows me to keep the supplied Allen keys with the tool itself.

The fit and finish of the slotting box is excellent with no rough edges or burrs anywhere. The box is anodised a very impressive-looking black, making it look a lot less utilitarian than brushed aluminium, plus making it resistant to corrosion and dirt over time. Clearly G&W's intention was a tool that they can be proud of and be a "flagship" for the brand. It's definitely a striking bit of equipment, no doubt about that. The only downside to a black finish is that dust shows up very easily....a good excuse to form the habit of cleaning tools after use!

A unique aspect of the G&W mitre slotting box is its capacity; in addition to the standard 3"/75mm mitre box base, G&W opted to produce an optional wider version, increasing its capacity to 4"/100mm; far wider than any other box on the market. For those of us producing large bass or extended range instrument boards, this is a welcome and very much unparalleled feature. The only downside of this additional width is that templates are left with a gap of about 1" or 25mm between the edge and the front wall. No big deal if you clamp your work prior to cutting, and a small 25mm shim added beside your template quickly solves this.

Whilst not an intended feature of design, the wide 4" capacity base allows fingerboards to be skewed at an angle within the box which enables slotting multiscale boards. This ability will come as a welcome bonus for many given the explosion of popularity in multiscale instrument making. I'll demonstrate how this is done accurately and without using templates in an upcoming tutorial (pending link)....

The one negative point I picked up from this slotting box is that it cannot slot a single-piece Fender-style neck, however neither can any other slotting box on the market. This said, it is not difficult to work around and only requires a simple reconfiguration of the slotting box to enable. This is another aspect where the wider base shines, allowing workpieces of headstock width to be secured within the box. Again, I'll detail this in a future tutorial (pending link).

Having been manually slotting my boards for too many years, I am excited to have brought back in this vital addition to any workshop, especially one that is of great quality and has flexible working options beyond its design remit.

For the beginner wanting to step up their game a little, or a small shop needing a reliable slotting station it's an affordable and highly recommended purchase. Buying pre-slotted boards is a costly premium to pay and often still requires a little adjustment of the depth and internal slot radius. Slotting your own boards quickly pays for itself, and you have freedom of choice in material selection, odd scale lengths, etc.

Overall, I don't dread the thought of fret slotting any more. My grip strength has become poorer as the years have gone on. Slotting just one board often needs me to take a couple of breaks because of simple fatigue. I should have gotten a mitre slotting box sooner for all of these reasons. Slotting boards should be part of the joy and not a labourious chore....this box certainly brings back that bit of joy.

Current list price on the Guitars and Woods Miter Fret Slotting box is €129 (just shy of USD$150 at the time of writing) with the wider base being a €10 package upgrade or available as a separate item. Check G&W's site at https://guitarsandwoods.com for more information and current pricing.