Neck adjustment is a key factor in having an instrument with great playing action from the lowest notes to the highest and intonates accurately. Here we'll discuss what makes good neck geometry so you can understand how to set up and control your own.

Contrary to what many people believe, a dead straight neck is not the most desirable aspect of an instrument set up for playing. Due to the distance a vibrating string moves (deflection) the neck requires a small amount of upward bow to prevent the strings from buzzing on frets. Adjusting the balance between string tension (which bows the neck upwards into "upbow") and the truss rod resisting (or assisting) this pull, the player can have control over the playability of the instrument.

This guide was written from the perspective of setting up a fast-playing instrument with a precise low setup such as an Ibanez RG/JEM or other similar instrument. Different players and their respective differing styles may require marginally different measurements dialling in to those quoted.

In their most basic form, a truss rod is designed to add stiffness (or "resistance to bending") to a neck under string tension. Originally, they were simple non-adjustable reinforcement bars set into the neck. Gibson introduced the first adjustable rod which was set into a curved channel. When the adjustment nut was tightened, the rod tried to straighten itself out, taking the neck with it. These single-acting rods are surprisingly effective and reliable when installed correctly and well-maintained. Double-acting rods are a much more flexible device which allow the corrective force of the truss rod to act both against and with the tension of the strings, carrying the neck both ways if required.

Other rod and neck adjustment methods exist, however the fundamental purpose is to give the owner (or tech) control over how the neck bends in use.

For the most part, it is! A bendy pretzel neck is no use to anybody. However, it has to be borne in mind that strings need room to vibrate. A surgically-straight neck can produce ultra-low action, which is great until you come to playing it. String buzz is a BIG problem! The ideal neck shape is one that has a very mild curve upwards. That simple small amount of "relief" gives strings room to breathe whilst still allowing low action in the upper positions.

This tutorial makes a few assumptions which you need to be confident about checking before using these techniques. Most importantly, it assumes a neck that is well-made and has not warped; that the fretwork is straight and even with no humps and dips beyond the usual curvature of a neck. These are not problems that a truss rod adjustment alone can remediate and should be fixed first.

With some single-acting and vintage Rickenbacker-style rods it is possible that these steps may not correct all necks. If you are attempting to adjust out a back bow where the neck is bent backwards into a convex shape (you are unable to seat the straightedge onto the first/last frets) and adjustment leaves the truss rod nut loose (string tension alone does not induce forward bow) the neck will likely require professional adjustment or more risky methods of forcing the neck into shape. Simply, the bow in the neck has also bent the convex truss rod channel straight or beyond into a concave type of curve. Tightening the truss rod in this condition will make the back bow more severe rather than doing what is otherwise expected. By all means head over to the forums or consult a professional tech for advice if this is the case.

Firstly, the neck needs checking as to whether or not it has a suitable amount of forward/up bow. This is done by placing a steel straightedge (or similar item with a dead straight edge) lengthwise down the center of the fingerboard between the 3rd and 4th strings, with the guitar tuned to pitch and in the player's position.

"Player's position" is how the guitar would be oriented if it were sitting in your lap for playing. If you try this procedure with the guitar flat on its back or other orientation, the neck may not be in it's natural position. Gravity acting on the mass of the neck and the headstock can cause it to bow marginally into a different position which throw off the measurements you are trying to gauge. If you prefer working on your instrument laid on the bench, that is fine also however it's good to know why an instrument might start acting slightly different once picked up and played normally!

Ensure that one end of the straightedge is touching the center of the first fret and the other is touching the center of the last fret. Using a feeler gauge (you can purchase one of these at most automotive stores) check the clearance at the 7th fret. If there is less than .005"/0,13mm clearance, the truss rod will need loosening in order to reduce its resistance to string tension, thereby increasing the amount of neck relief present. If there is a larger clearance then the opposite is true; the truss rod will require tightening to increase resistance and decrease neck relief.

Tightening or loosening of truss rods should only be carried out in small steps. Sensitive truss rods can sometimes require a small fraction of a turn to significantly alter neck shape. Additionally, it can take some time for the wood in necks to "move into the new shape" and reach equilibrium....don't go cranking on the rod if it doesn't co-operate immediately! A rushed setup may yield the correct clearances initially, however necks may continue to move over a longer period. Patience more than pays off when dialling in the perfect setup! An hour between truss rod adjustments is satisfactory with a whole re-check of the neck the following day is good practice.

Should the clearance be too small, the neck is too straight. If the straightedge is unable to sit over the first and last frets, the neck is in fact bowed backwards ("backbow"). Both of these situations require that the truss rod nut be loosened by turning it counterclockwise. Do this gradually as described previously and recheck the clearance each time, allowing the neck to resettle as appropriate.

If the clearance at the 7th fret was more than .015"/0,13mm you will need to tighten the truss rod by turning the nut in a clockwise direction. Remember to move it in fractional increments (less than 1/8th) as it can move significantly with each adjustment; recheck the clearance each time after the neck settles.

Below you will see pictures of the common types and where the truss rod nut is located.

On many guitars you will find the truss rod nut located underneath a cover on the headstock. 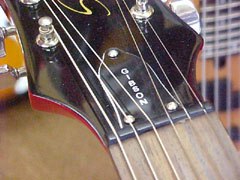 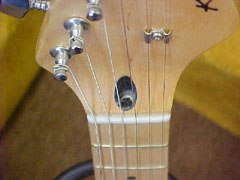 For some guitars you will find the truss rod adjustment on the other end of the neck which may mean you will have to remove the strings and take the neck off to make an adjustment. This does mean that you will not be able to make the adjustments with the neck under string tension or in the player's position. Plan adjustments ahead before removing the neck! 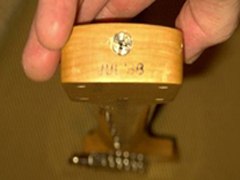 In the case of spoke wheel adjustment nuts at the heel end, it is possible to adjust the rod using a screwdriver or Allen key by parting the 3rd and 4th strings to gain access to the wheel. 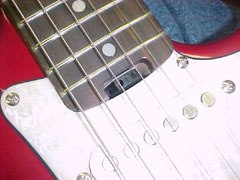 The two most common style of truss rod adjustment tools are Allen wrenches and barrel style socket wrenches. If you're adjusting the neck on (for example) an older style Strat neck at the heel you may need to use a flat bladed screwdriver instead. Always check that the tool is the correct size before applying force; a stripped or broken adjustment nut is a far greater headache than a badly set up neck! 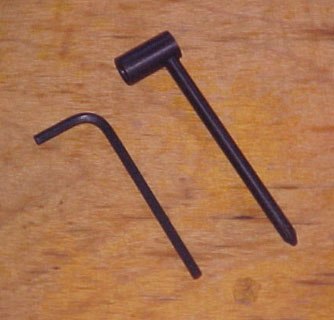 Step 5: Adjusting the intonation of a guitar