Producing spool clamps on a lathe is not the quickest method of manufacture, however it produces beautiful-looking spools clamps that rival any commercial equivalent.

Wood turning is an intensely enjoyable experience for seasoned lathe pilots, where the process is often just as important as the end product. This might not immediately seem to suit the manufacturing aspect of this tutorial series, however like any repeatable process, the tasks can be optimised. The scope of this brief tutorial cannot cover basic lathe usage and safety, so seek a second opinion on anything you are unsure of before proceeding!

Cut your stock a little large in width/height than your target spool diameter. It's better to remove material away from the lathe than it is on it, however you should still allow a reasonable margin. Square off your ends, identify the centres and use an awl to create locations. For this tutorial I used a piece of Karelian Birch around 460mm x 42mm square (just over 18" x 1-1/2"?). I wanted to produce 13 spools (one spare) 30mm deep and 38mm in diameter; the length allows for cutdown losses of 5mm between spools. 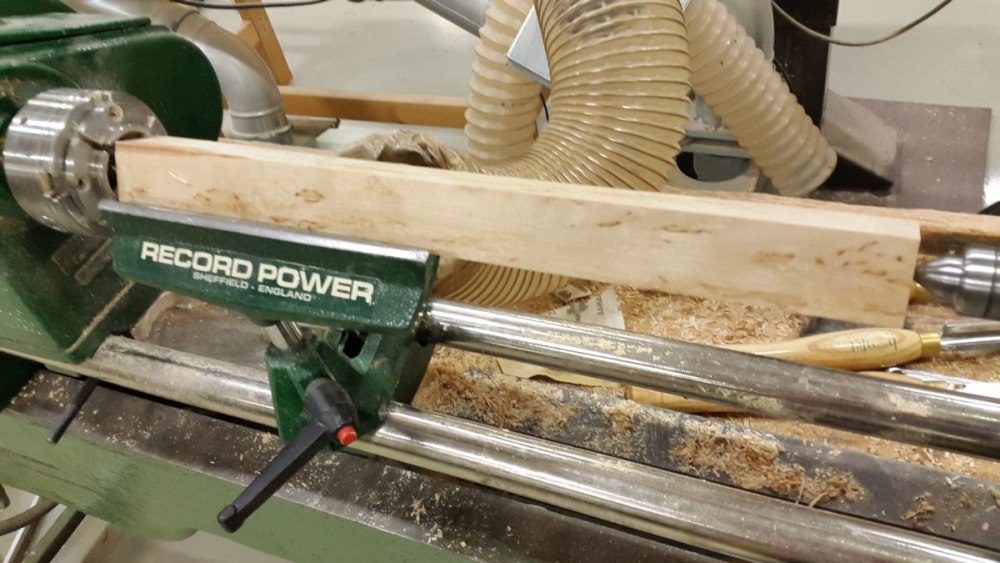 The blank is turned down to a consistent cylinder using a roughing gouge, then given a cleaner finish with a skew chisel. Measurements are taken along the length ensure consistency. 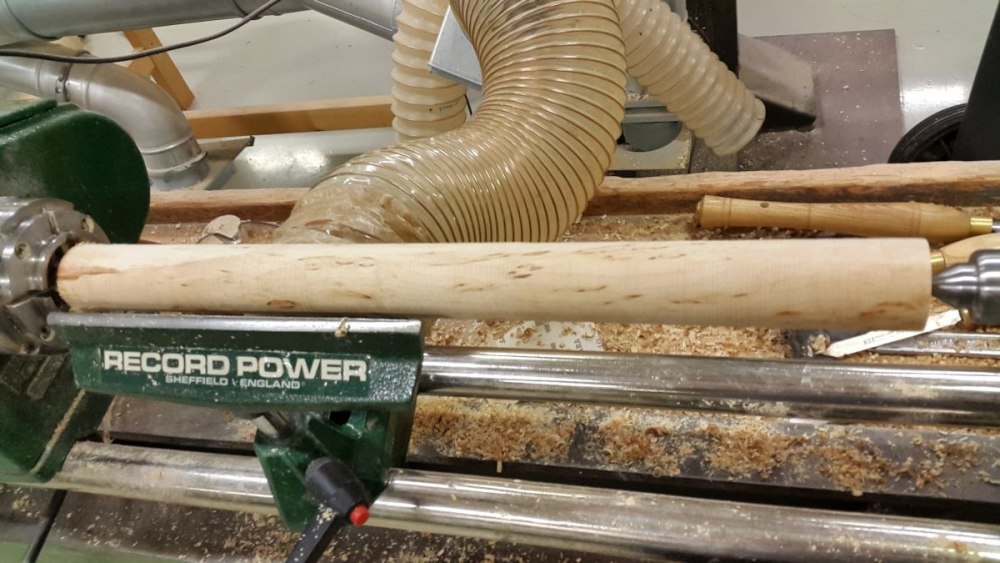 The spindle is now sanded to 240 grit. It's easier to do it at this stage to reveal any flaws from the turning tools. 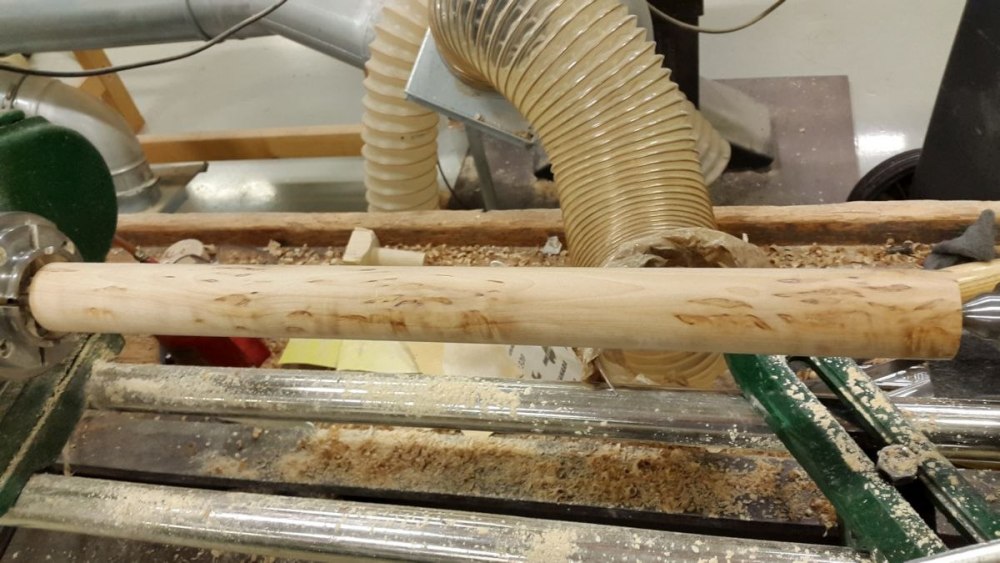 Starting from one end, marks are placed every 30mm then 5mm. The 30mm length of each spool, plus a cut line wider than the 3mm parting tool. Parting is unsafe in one cut due to being a captured cut....if it hangs up, you're in a world of poor anecdotes. After the positions were marked, the pencil was held against each mark and the chuck spun by hand to extend concentric lines around the spindle. 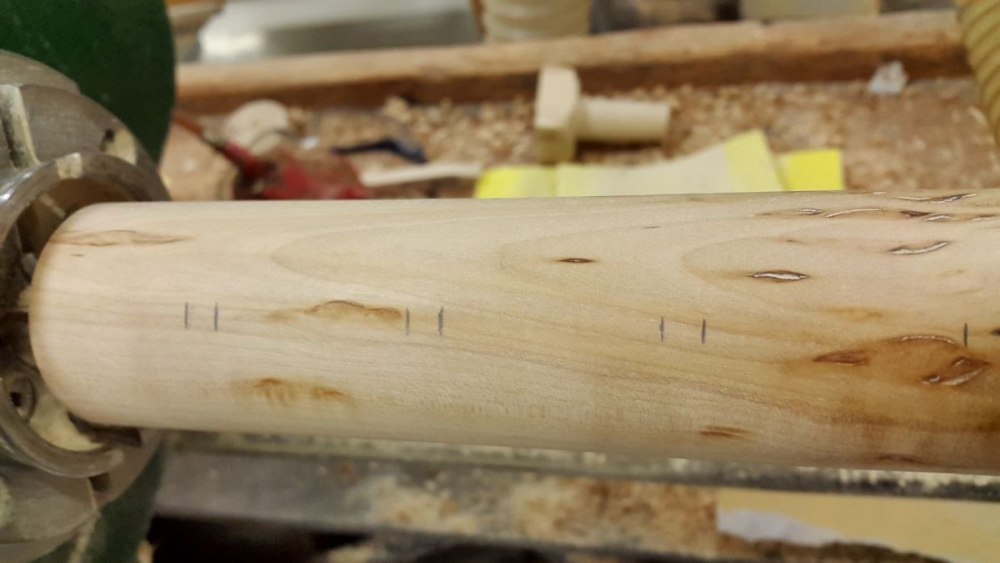 Parting the spools. Being such a thin workpiece, the central parting flexes the wood causing vibrations, chattering and a higher chance of tool catches. Go slowly and don't fight the wood! Parting doesn't need to be extremely deep. I left around 15-20mm spigots between the spools. These will be cut away later. 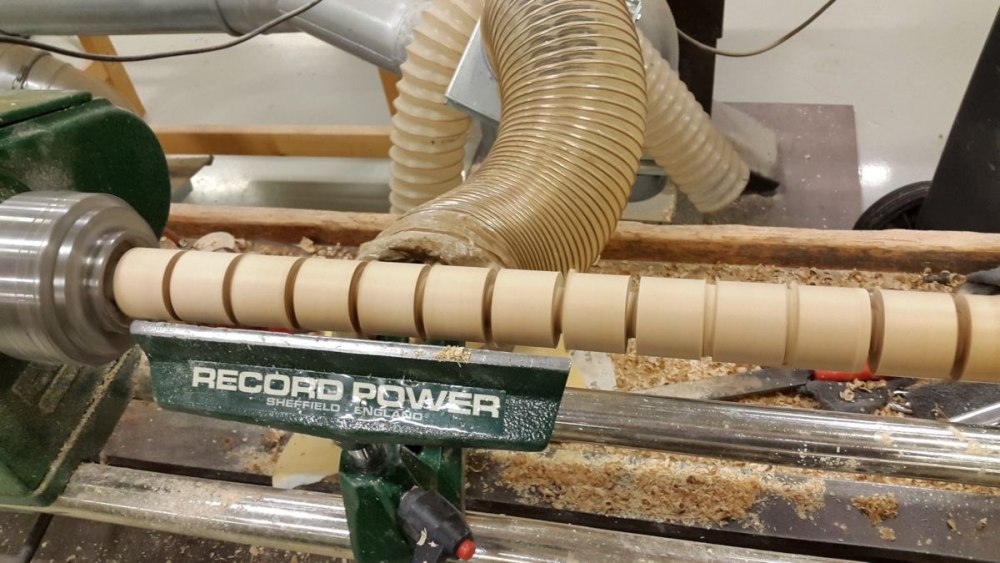 A detail gouge can be used to create rough roundovers. Sanding later on can refine and smooth these. Diameter is just under 1mm larger than target. 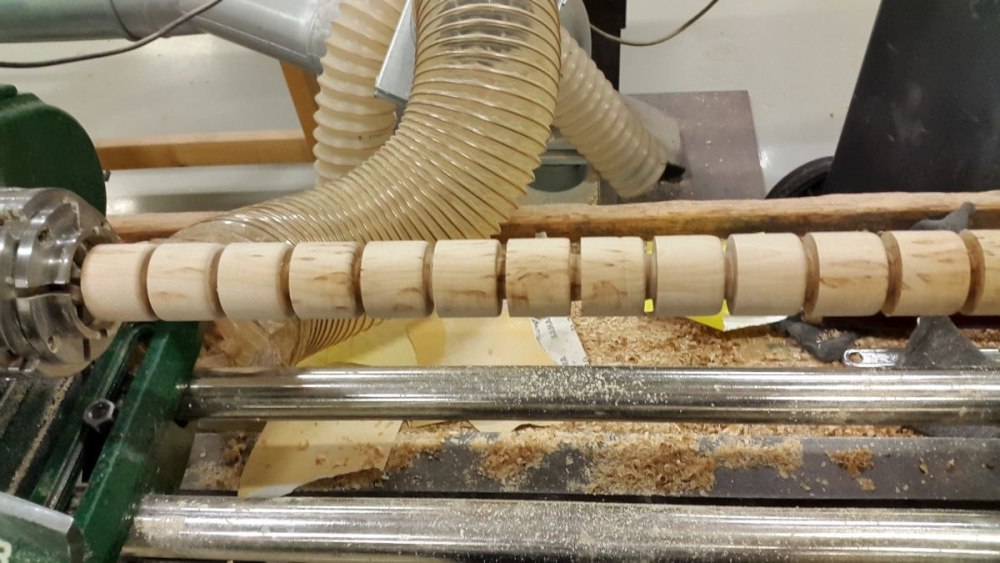 The spindle is removed from the lathe and cut down into spools. The remaining spigot needed to be sanded back on the belt sander. The clamping face is the only one that really need to be completely flush. I left a "shadow" on the top to help me to identify centres for drilling, since the roundover robs me of edges. 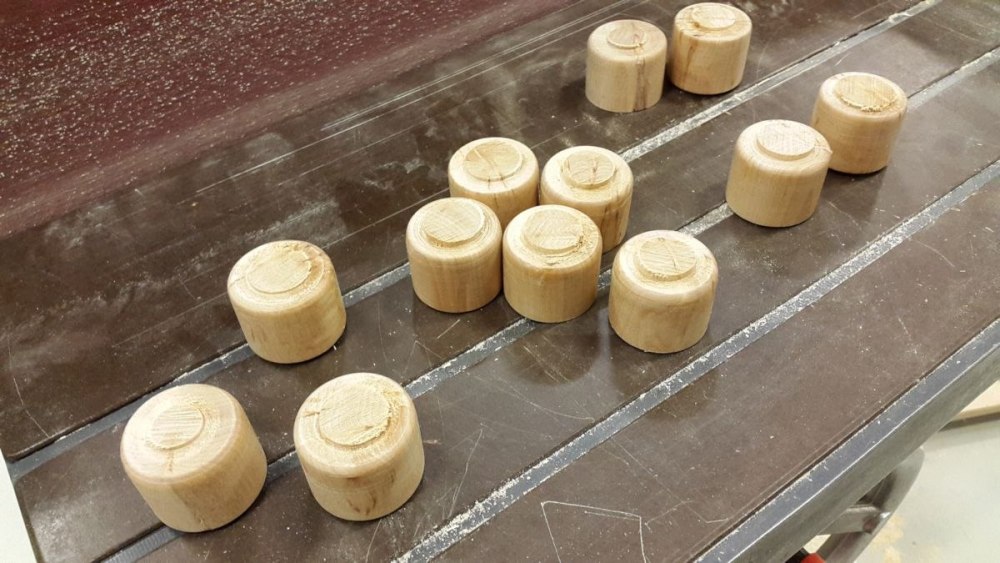 Cutting down and cleaning - 10min

Centres are marked out and a small amount of Titebond I spread onto the spool faces. The spools were placed onto pieces of cork. Whilst drying, I made up a quick jig for holding round items whilst drilling them. I had a small benchtop vise suitable for this available, however this simple tool is far faster. The "jaws" themselves might have been better being lined with sandpaper or cork, however it proved fine in use. 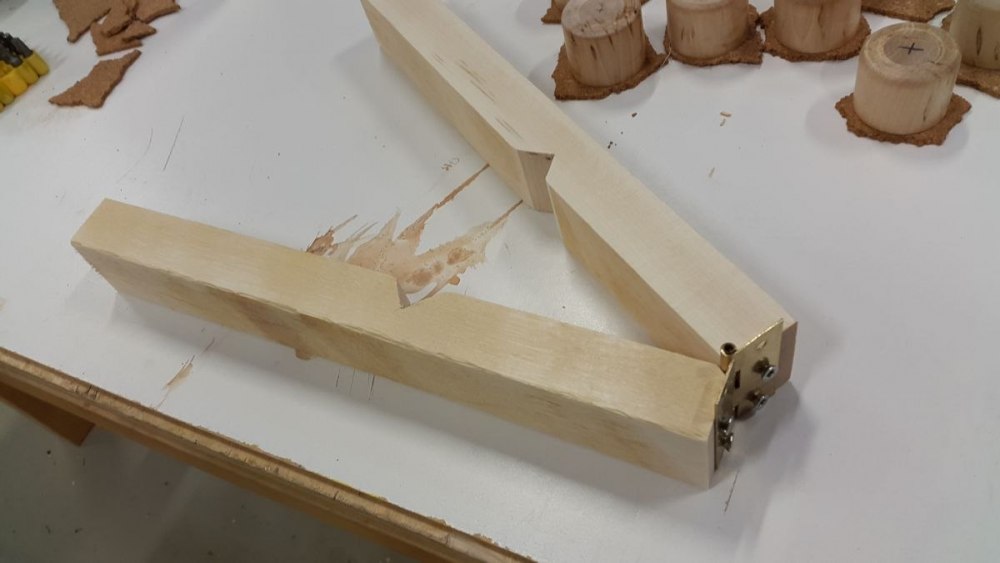 Back at the lathe, the spools were mounted lightly into the chuck and the excess cork turned off with a skew chisel. The chuck will cause slight marks in the wood, however nothing more than can be sanded out later. 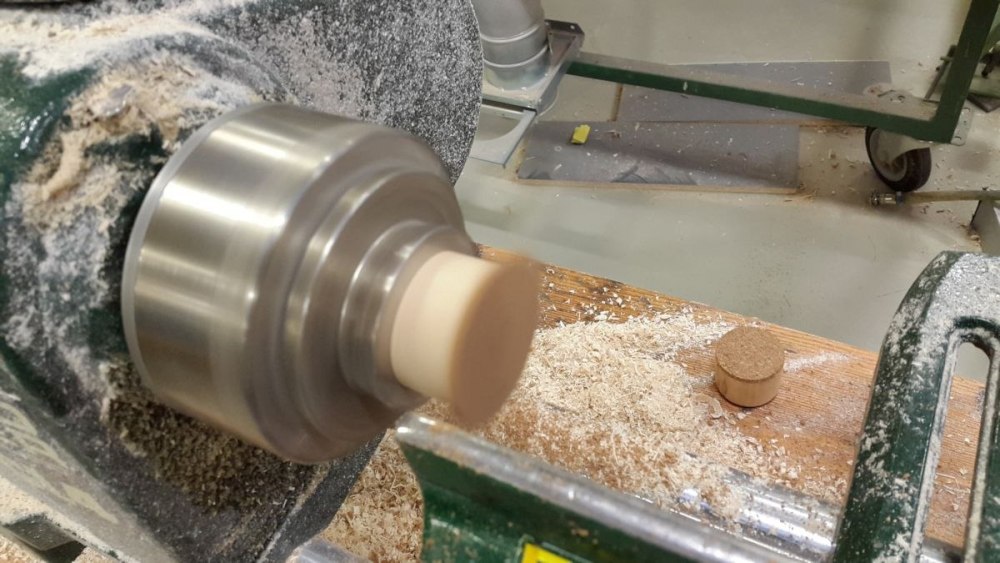 Turning down the cork - 5min

A 25mm Forstner bit in a pillar drill set with a 3mm depth of cut. It is not important if the recess is marginally off-centre; only that the depth of cut is correct. All spools can be recessed for simplicity of manufacture. The "nutcracker" workholding tool proved to be a great way of speeding up this process. 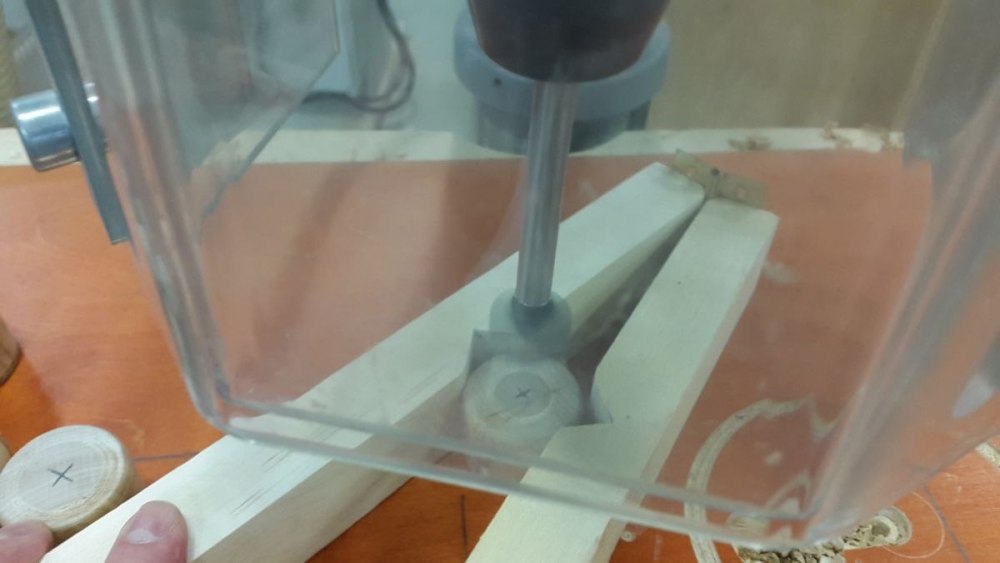 Drilling dead centre using a pillar drill is difficult and time-consuming. The lathe offers a more accurate option. Mounting each spool, the corner of a skew chisel marked out the rotational centre for a drill to follow (yes, I should have moved the tool rest). The recess was also trued up and widened slightly to become perfectly concentric. 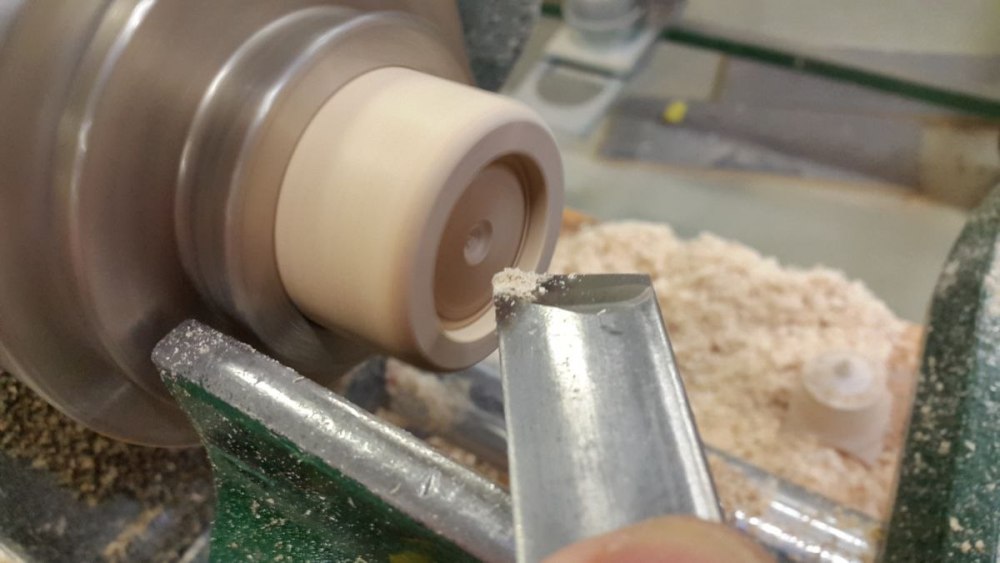 A Jacobs chuck was fitted into the tailstock with a 10mm drill bit. These spools are to be fitted with 8mm/M8 allthread. The drill will follow the marked centre instead of randomly going where it wants. 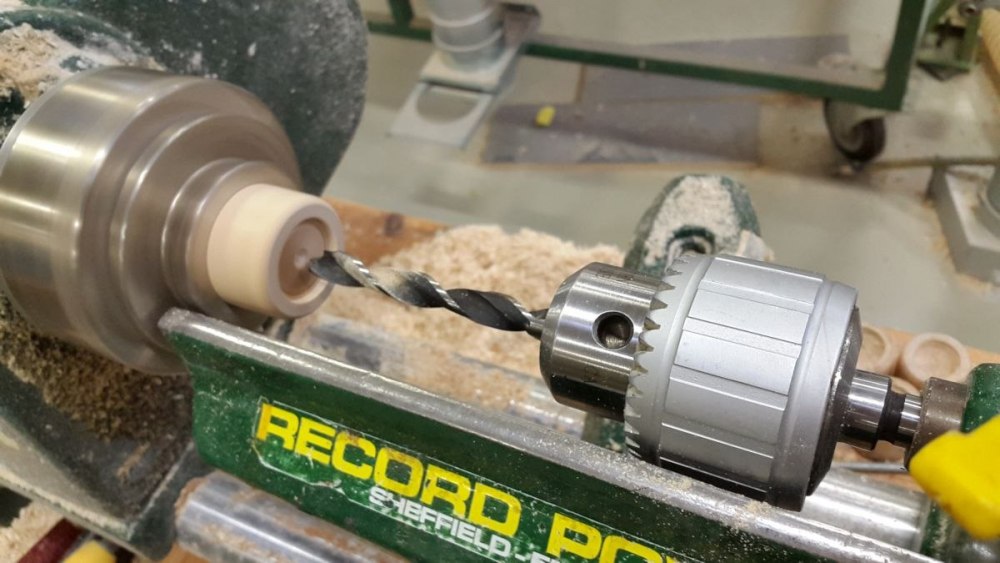 Advancing the drill bit with the tailstock adjuster until drilled through.... 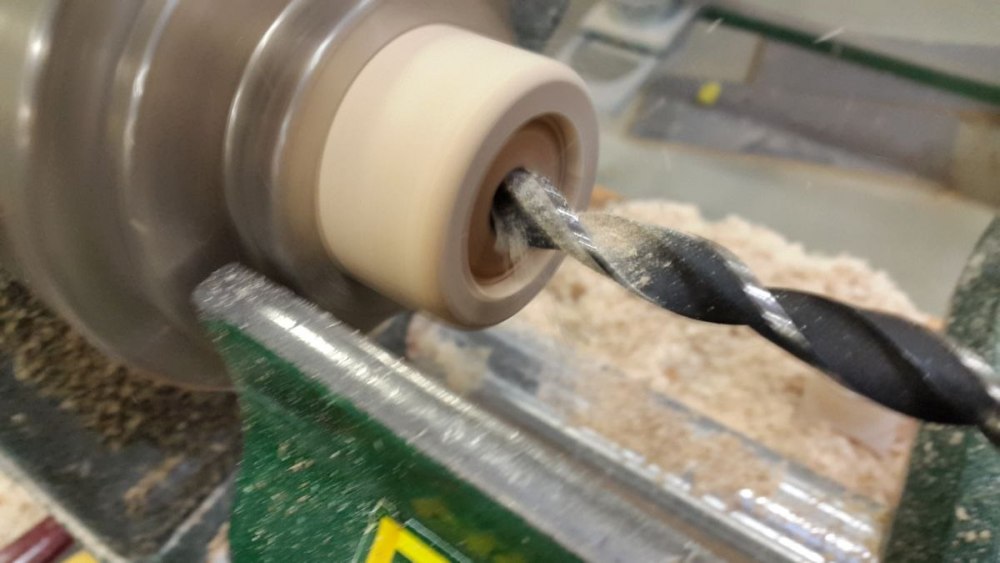 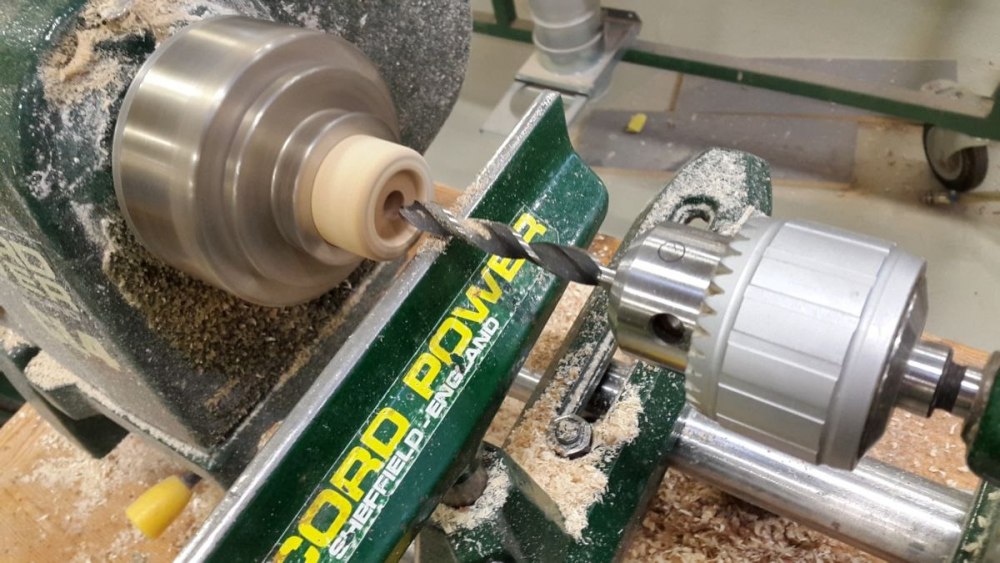 Cleaning up and drilling spools through - 15min

Time to finish up the spools! A small piece of scrap turning was faced off and repurposed as a jam chuck against a live centre. These work purely by friction against a workpiece and should only be used for sanding and finishing purposes, not turning. The live centre was positioned so that it can be advanced and withdrawn to capture and release spools without constantly turning the lathe on/off. 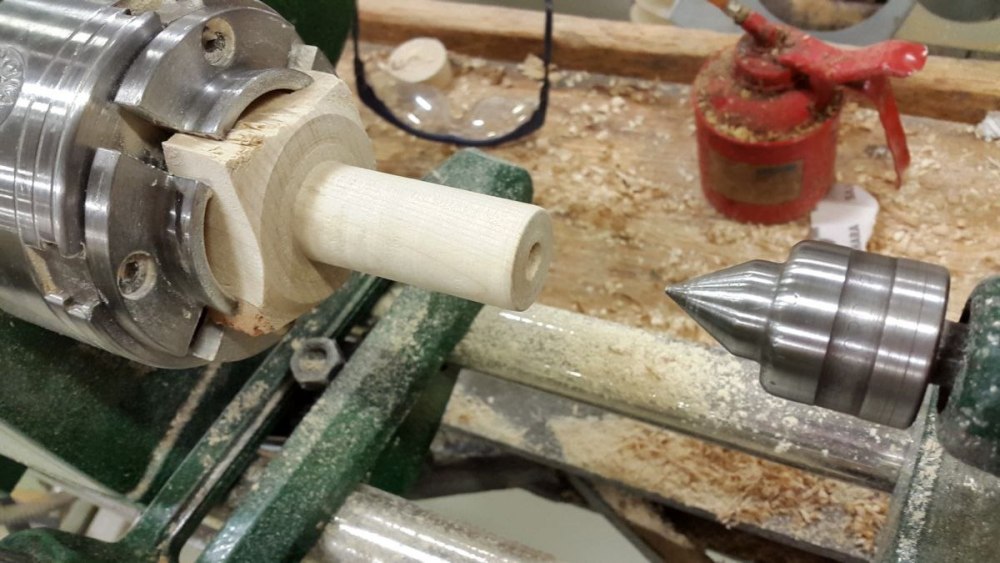 The jam chuck bears flat against one side whilst the live centre locates into the central hole. Each spool was taken from 100 grit with light shaping applied to smooth the roundover. Each spool when then progressed through 150, 240, 320 and finally burnished with its own sawdust from previous turning operations. 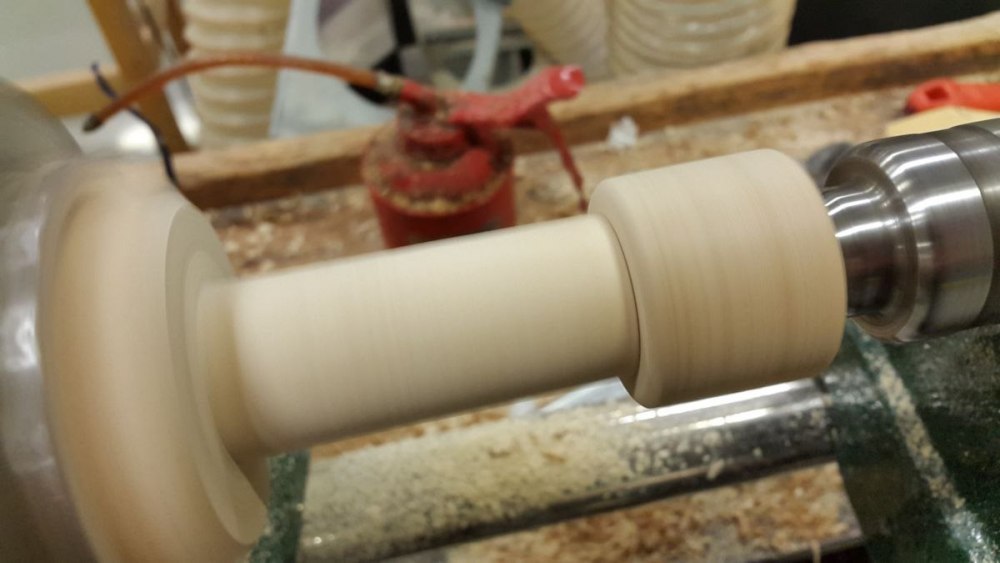 Whilst on the lathe, raw linseed oil was applied using a cloth. Bear in mind the usual safety precautions about oily rags self-combusting! The finished spools: 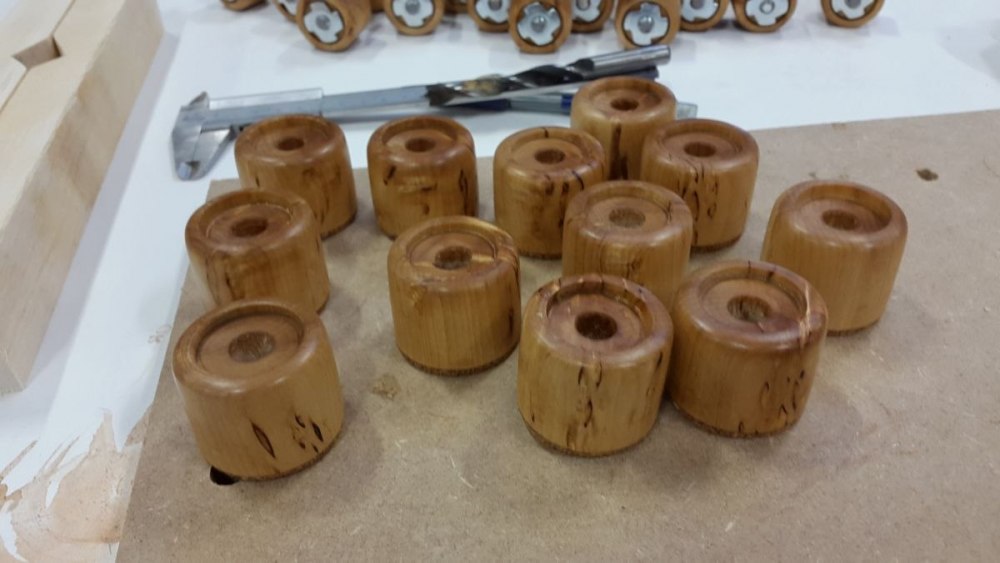 Protip: When repetitively sanding spools through grits, lay your sandpaper as shown in order. Take the 100 grit, sand the workpiece, place it face down. Use the next grit, then place that on top of the 100 grit face down, wash rinse and repeat. After you've finished that spool, turn your stack of papers over....far better than hunting through your clutter for the next grit.... 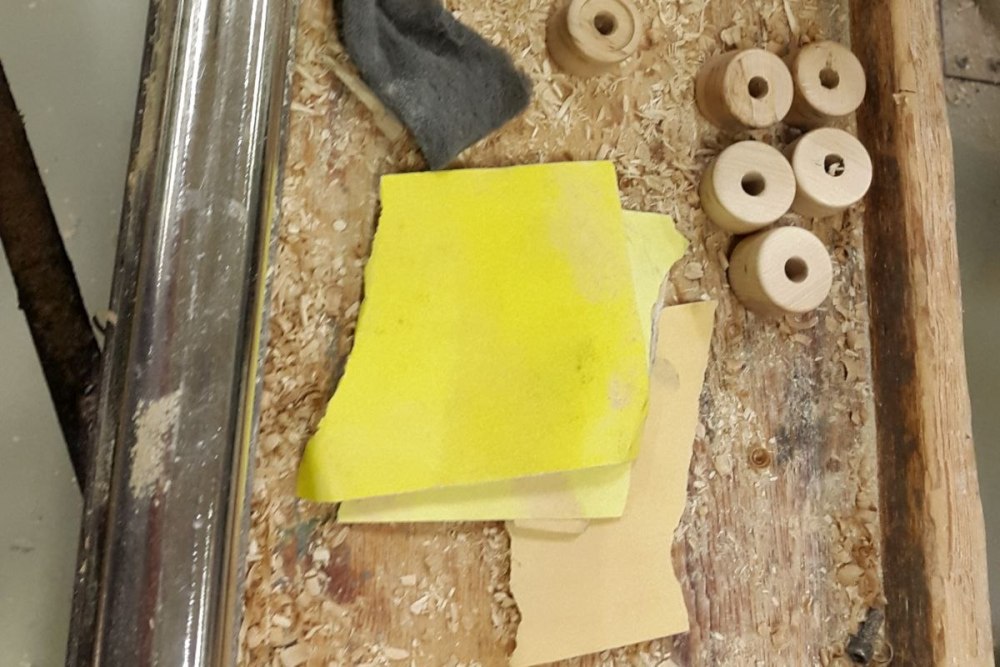 T-nuts were fitted into the lower spools using a plastic-faced hammer. To ease the stress on the wood, I ground the teeth of each T-nut slightly smaller - they only need to be seated lightly and not rotate in place.

Holding the threaded rod in a vise, a little cyanoacrylate glue was dripped into the thread. 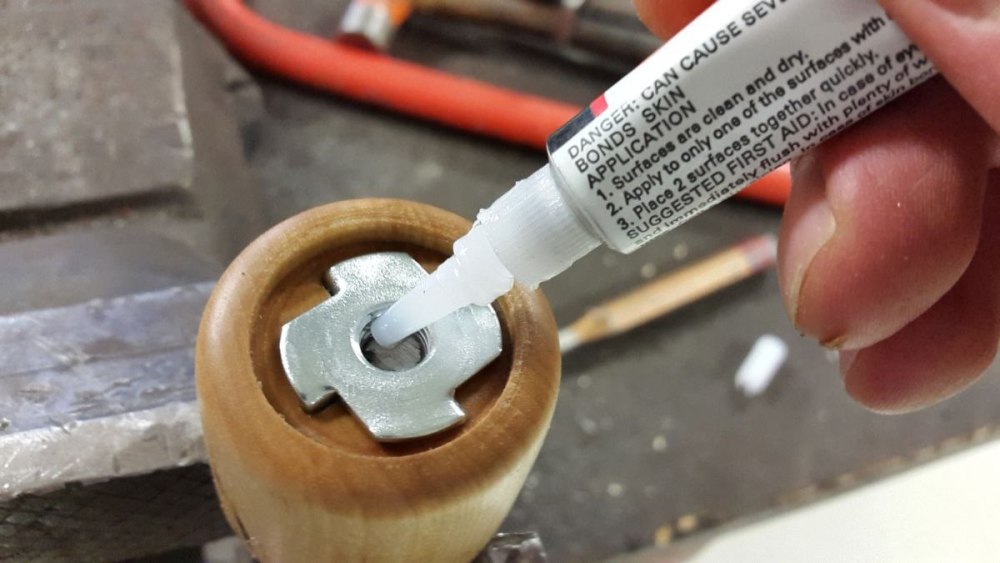 Before the glue locked the thread, I opened the vise and advanced the thread until it was just above the surface of the T-nut. The vise was then locked back up and the spool tightened until this amount of thread was exposed: 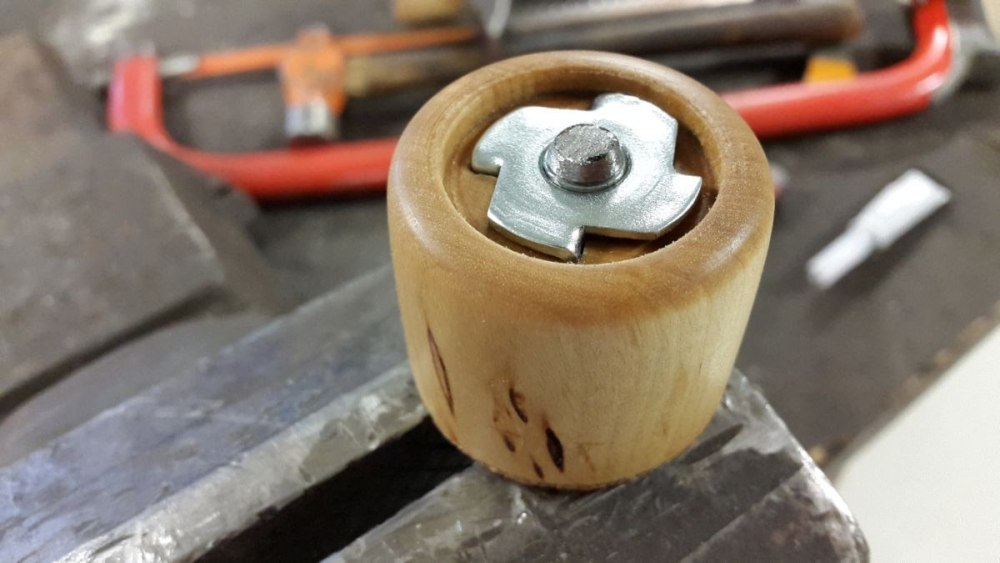 This seats the spool firmly against the vise jaws. A pin punch and hammer was used to deform the end of the rod.... 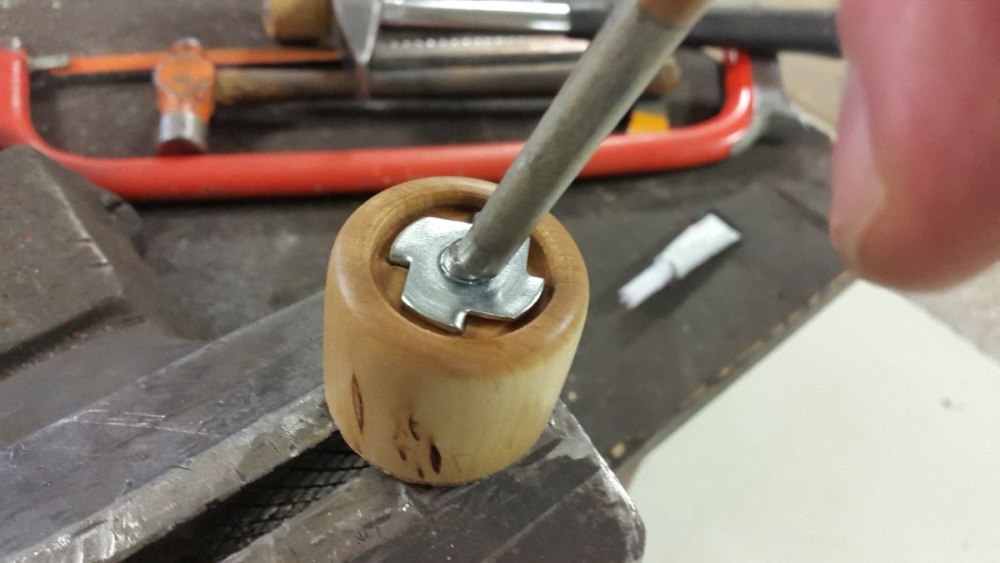 ....before being dressed into a nice round end using a peening hammer. 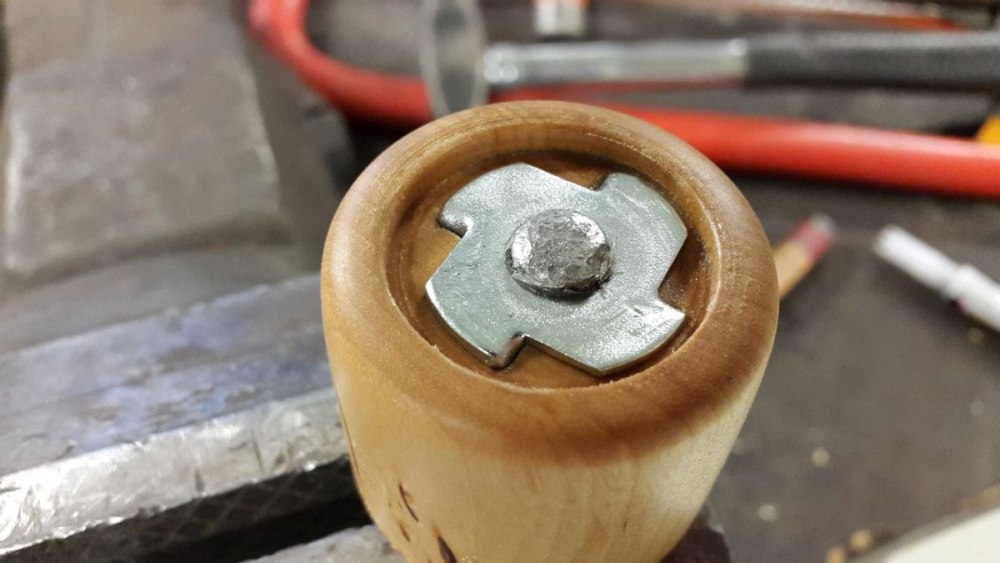 All that now remains is to assemble the rest of the parts. A washer, short length of plastic tubing and a wingnut produce fine spool clamps! All in all, these six clamps took me around a couple of hours of work. 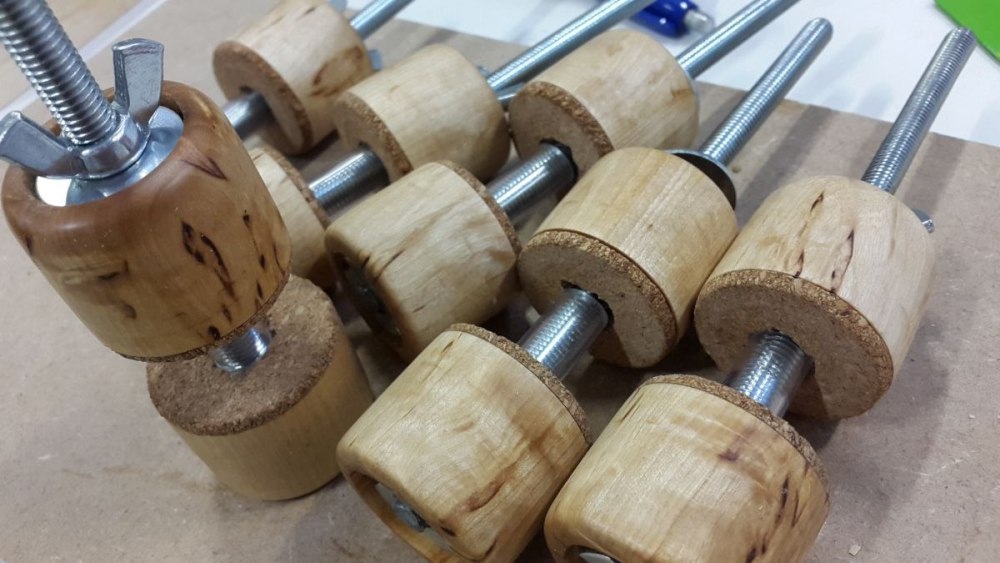 Producing the clamps using a lathe as the primary method of producing spools is not the most economical process when it comes to time. It does however afford plenty of opportunity to make very consistent and accurate spools. The hole saw method also produces an accurate centre hole via the pilot bit, however adding in any sort of recess for the washer or a T-nut can be problematic.

Overall, I like this method....mostly due to how enjoyable working on a lathe is. It is also reasonably simple to scale up; producing 10 blanks and turning down 10 spindles into 130 spools doesn't take that much time once you become familiar and methodical with each working step. You can even drop the final peening work to save time since it truly isn't necessary. Turning 10 blanks into 65 finished spool clamps is about a day's work, and a worthwhile consideration if lathe work appeals to you.