As an alternative to producing spools from solid material with a hole saw, this tutorial shows how you can achieve the same end using anything from thinner hardwood to basic Birch plywood.

Making spool clamps isn't limited to having to cut them from solid wood. Using the same tools we can repurpose thin stock or sheet goods to the exact same end.

For this tutorial, you can use Birch plywood or thin hardwood of any thickness. At least 6,0mm or 1/4" is more practical than than really thin stock. Similarly, very thick plywood (getting towards >25mm or 1") can be treated as solid wood; refer to the solid wood/hole saw tutorial!

Simply, we are going to be cutting out several thin, identically-shaped pucks of thin material. These pucks are then laminated together to produce thicker stronger spools. Simple!

A Quick Aside On Tooling....

If you've already read the other hole saw spool clamp tutorials, you'll be familiar with my woes using this awfully-designed Bosch combination hole saw. Genuinely, avoid it like the plague. The plastic body broke in the original and in the replacement too. Even cheap no-name import models with cheap metal bodies are more durable. This thing constitutes regret....note that it indicates suitability in solid wood! I only just about got this to cut enough pucks for one clamp before it became unusable. 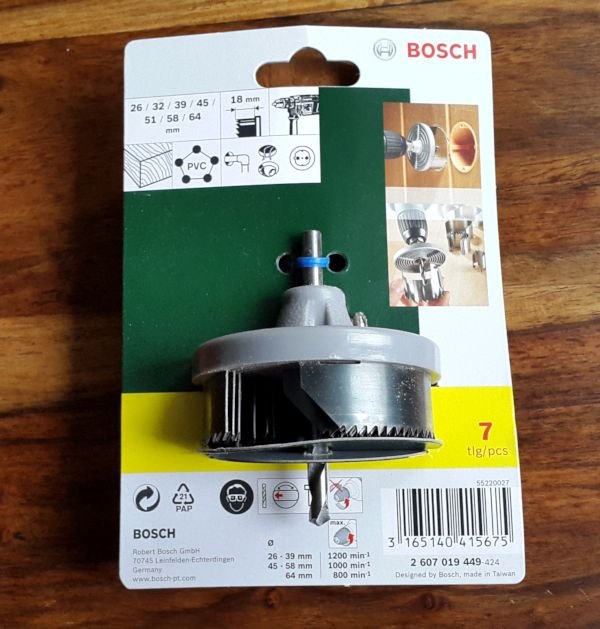 I'd have considered a heavier-duty hole saw if it weren't for the fact that the arbor and one hole saw cost 4-5 times that of a cheap combination hole saw. Again, cheaper no-name brands will do the job at a fraction of the cost. 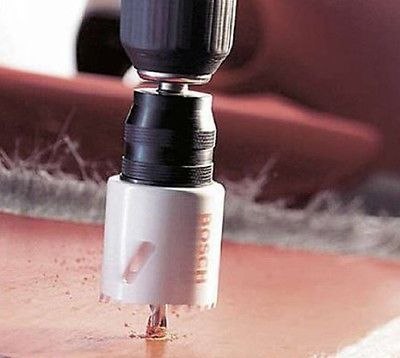 Enough of my diversion into trashing badly-made tools, and let's get right into the process. From a safety standpoint, make sure you have a sacrificial backing board behind your chosen stock. The pilot bit usually protrudes a fair way beyond the hole saw itself, so take this into consideration. Secondly, clamp the sheet down to the table when making a cut. If you don't do this, cut from the right-hand side of the board. If the saw catches and spins the material, it won't hit you. Keep your hands and any loose clothing or hair well clear of a large spinning cutter!

I carried out the cutting using a pillar drill, however a hand drill would do the job well also. Simply take more care to secure your stock and avoid the spinny sharp bits.

Between each cut (or during it, if advancing becomes difficult, you see smoke, etc.) check the saw for trapped debris in the teeth and clean it with a brush (not fingers) or a little compressed air if so. Obviously, when the cutter is not spinning.... 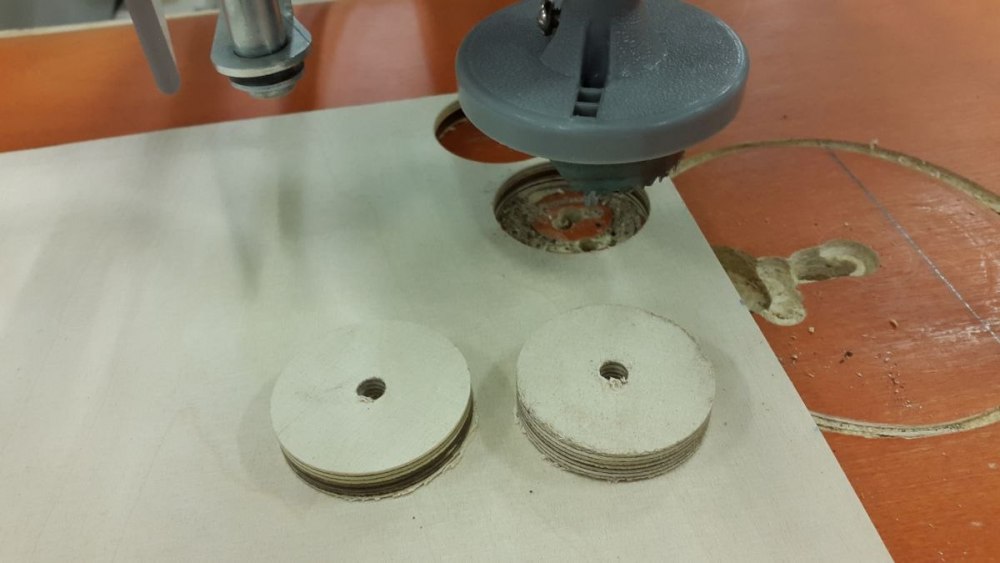 You can also cut cork with the hole saw! Simply place the sheet underneath your clamped sheet stock when cutting a puck. Note that the issues I had with the saw resulted in poor cut quality on the last pucks and more burning in spite of a correct RPM setting. 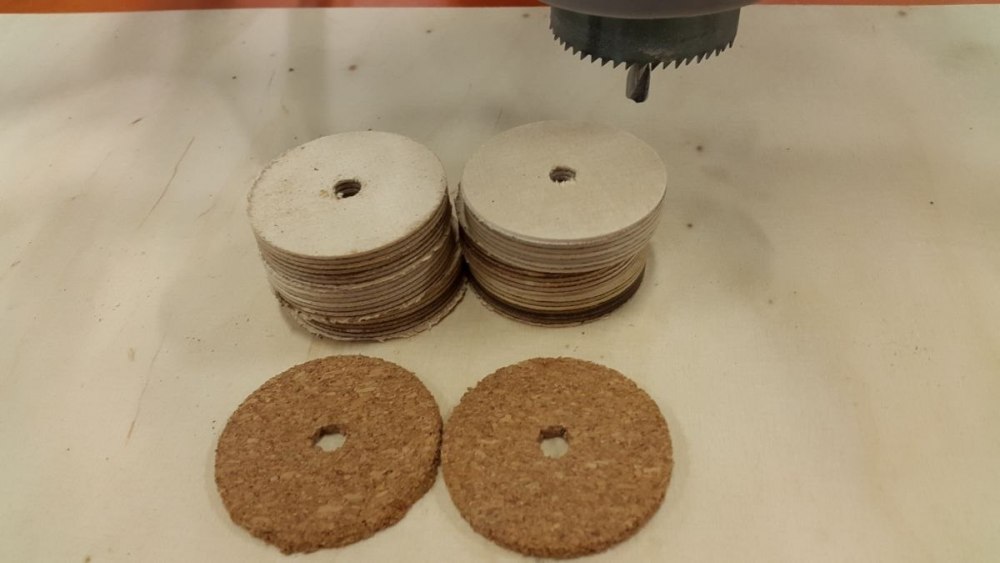 Give the surface of each puck a quick cleanup to rid yourself of stray splinters. A few strokes on some 120 grit paper works nicely. 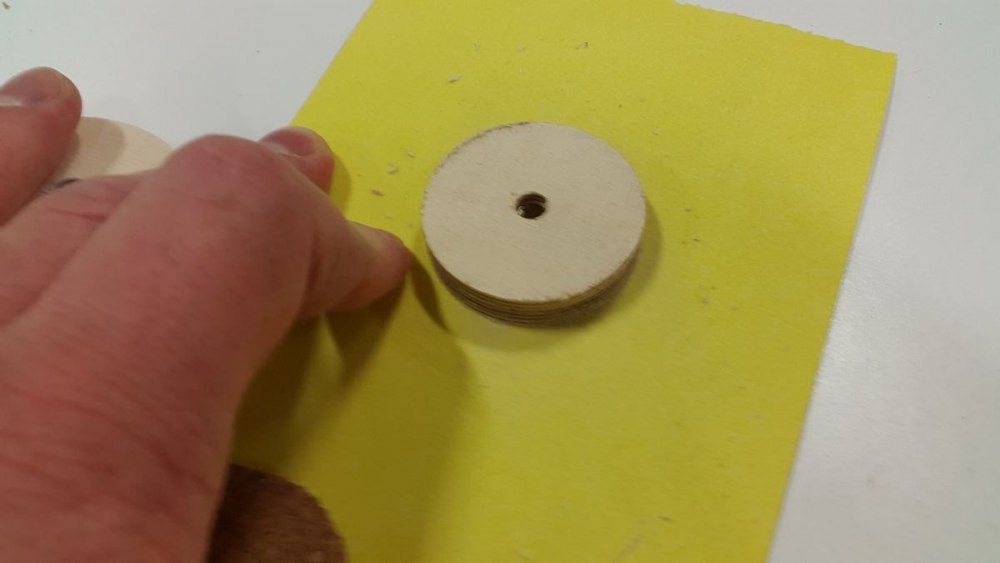 At this stage I remembered that the pilot hole was only 1/4" and my allthread is M8 (8mm). I carefully opened out the existing holes using a 9mm twist drill bit. Take extra care when doing this step, as the drill will happily grab the wood and spin it around. Use a bench vise or some other way of holding each puck. Establish the hole by running the drill backwards, otherwise it can move off-centre....

Place your pucks in order to make your life easier. It's also methodical when you've got glue soaking into the wood. These are stacked from left to right in two sets of three. You don't need a huge amount of glue, since the spools are never subject to forces which would pull the pucks apart. Just enough to adhere them without glue squeeze-out. 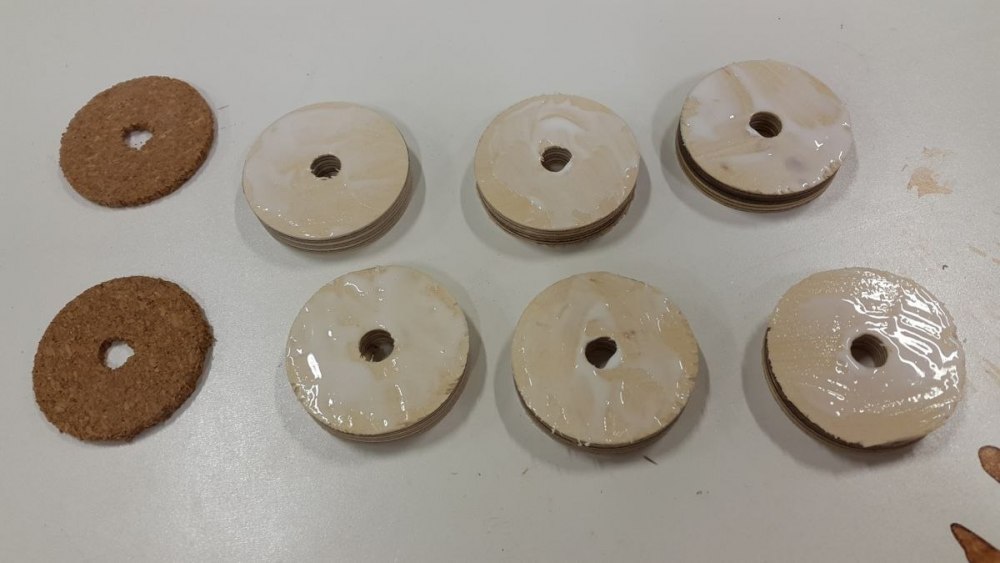 Take both sets of pucks, and mount the spools on a section of waste allthread or a short bolt. Add washers plus wingnuts, and clamp everything together until the glue sets up. It's worth using scrap allthread or bolts used purely for this glueup. You'll get glue in the threads which isn't welcome on a finished spool clamp! 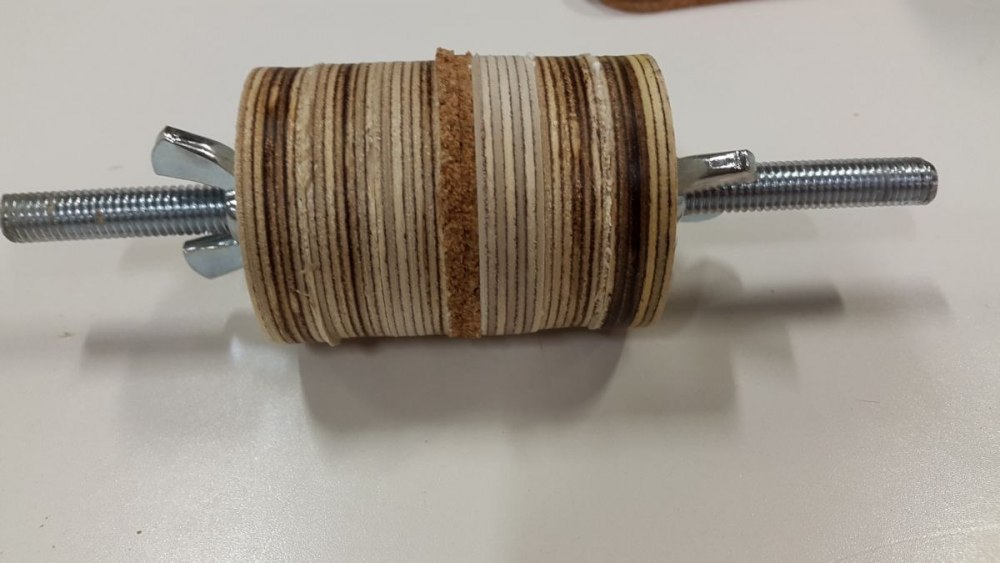 After the glue has set up, you can optionally make a "poor man's lathe" with a drill to clean up the spools. Take care when doing this, and be very aware that the paper can get pulled out of your hand, or the drill can "walk" up the paper. Do this at your own peril and with understanding of the hazards. 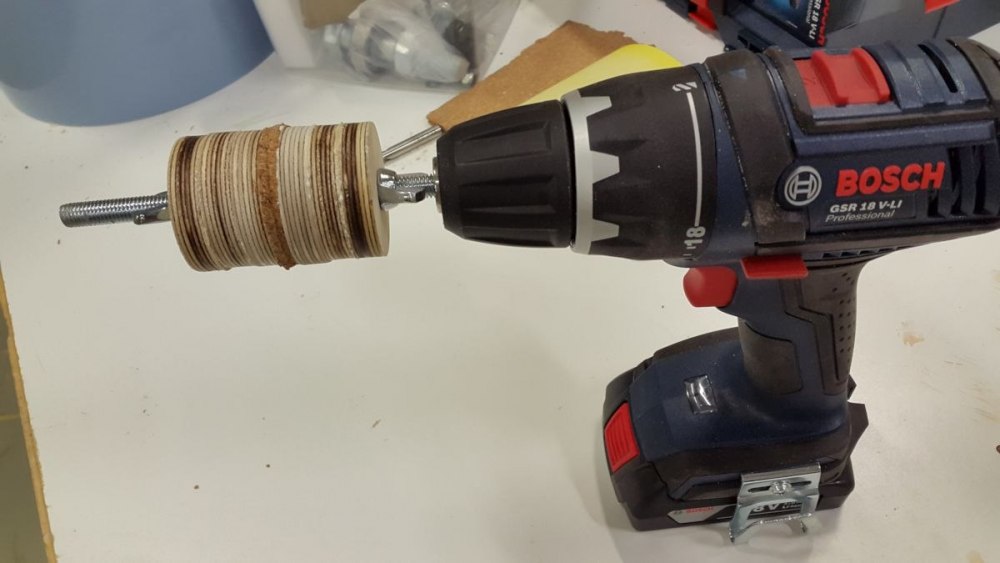 Not bad. A couple of spools are misaligned which wrapping them in tape at glueup might have reduced. This is either from the hole saw or perhaps the opened-out 9mm central hole allowing misalignment. No big deal in the slightest. 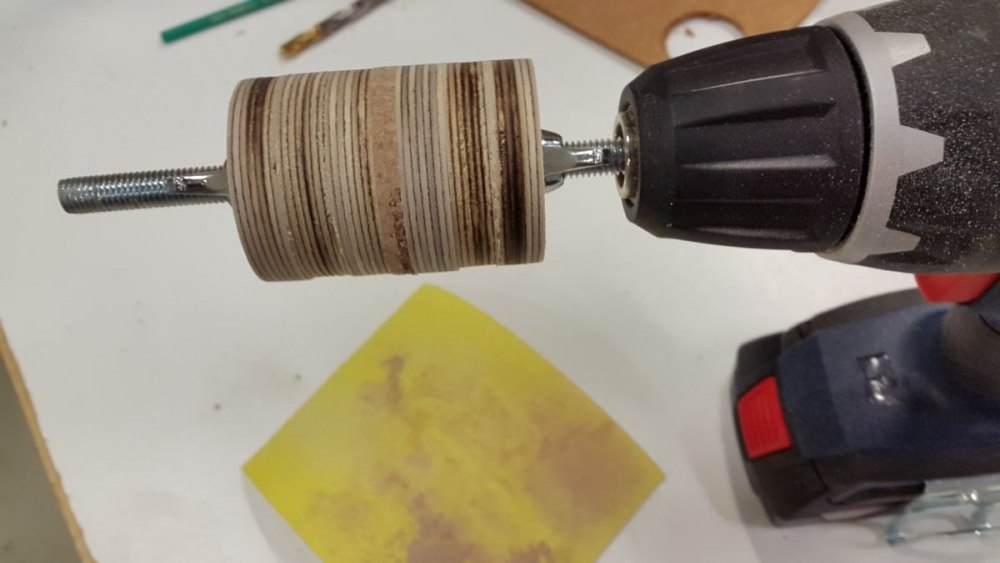 I took one spool and opened out the bottom of the central hole to 10mm for accommodating a T-nut. This was peened and glued in place and a short length of PVC tube added. 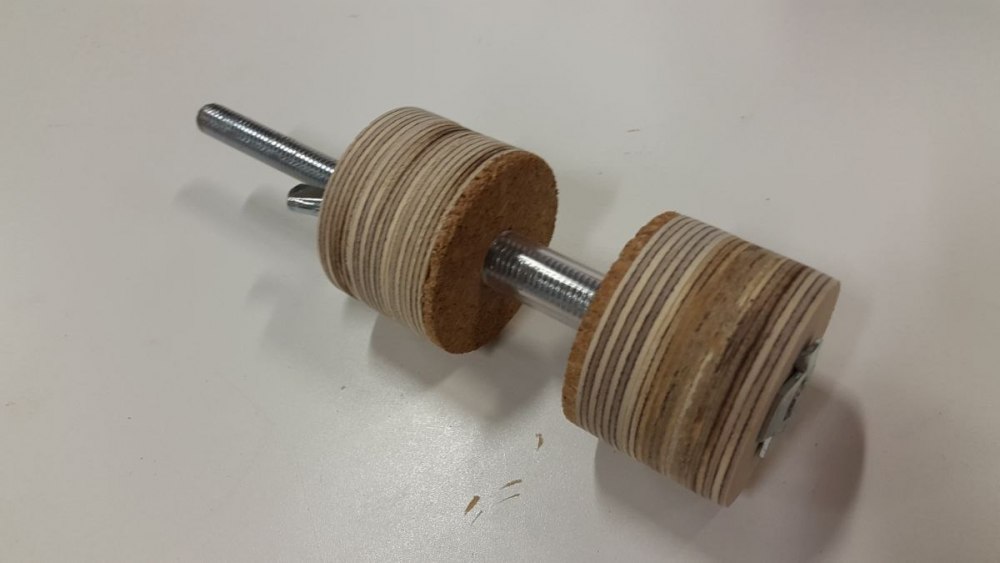 Simple, inexpensive and just as functional as the best spool clamps out there. 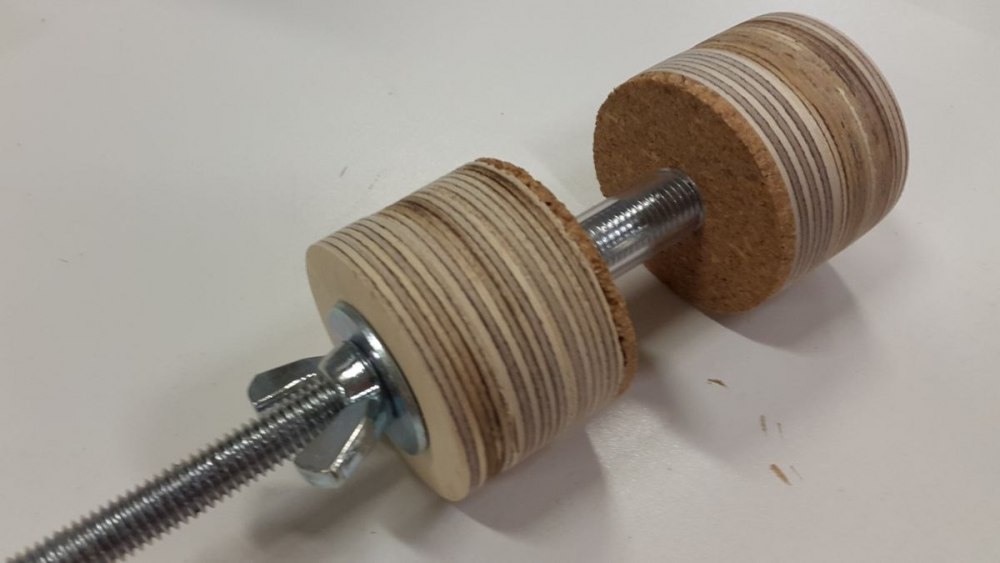 If you have access to plenty of sheet stock or thin hardwood scrap, laminating them up to produce your spools is a quick and inexpensive approach to manufacturing the clamps. Whilst they might not be the most beautiful, they are definitely quick to make up. Using a better quality hole saw, I think I could have put together perhaps a couple dozen of these in less than a couple of hours. It really is a very streamlined and simplified option.

You might have noticed that all of the tools used were Bosch branded. This was not an effort on my part and we're certainly not sponsored by Bosch....and never will be after my glowing review of that frankly horrific hole saw! I wanted a Makita drill anyway however the Bosch seems to be working pretty well.