In part three of this in-depth product review series, contributors Andrew Knight and Carl Maltby give us a full rundown on this little workhorse with real-world use and observational commentary....

AK: Alright, now that Carl has gone and shown the guts of this little beast, I'll do a little real-world demo. As I said in part one, my main usage of this router is within jigs and templates that I've designed around the use of a guide bushing. For this demonstration, I'll use the wee Makita with a pair of templates: one for a truss rod rout, another for a pair of channels for carbon fiber reinforcements. What better test than real life?

CM: Totally. It all looks good on paper and under the hood, but putting the rubber to the road is a world of difference.

AK: Before we get going, let's take a look at some of the exterior features. Here, you can see the power switch, variable speed potentiometer, brush replacement port, and height adjustment for the fixed base. 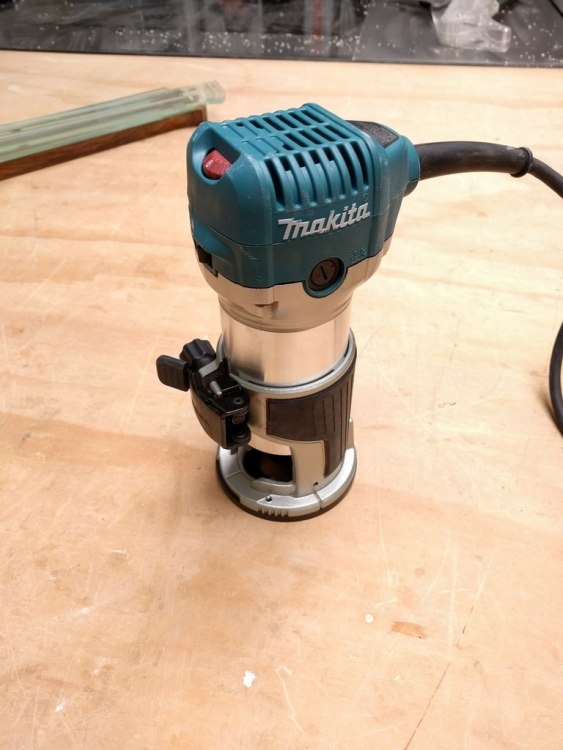 AK: On the underside, a removable plastic (Bakelite) plate. The recess that accepts standard Porter-Cable template guides is clearly visible.

CM: I'm going to have to get some of those myself....I think they're only available in Imperial sizes though.... 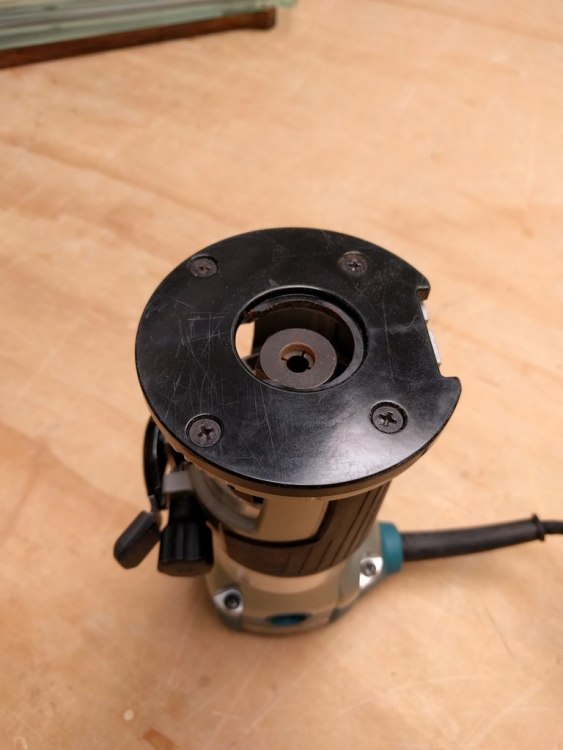 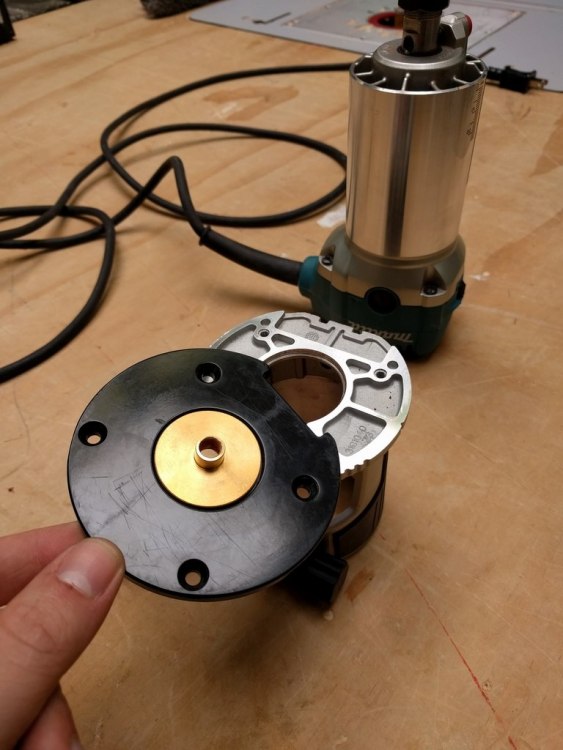 AK: The height adjustment mechanism is a nicely made rack-and-pinion setup. It's reasonably precise and very easy to use, but lacks a truly helpful depth marking system. More on that later.

CM: I'd go as far as to calling it a useless adjustment system myself. Then again, anything more complex than this would make it heavier and less compact. At least it's simple to adjust like you say. It just takes a bit of patience to dial it in perfectly. 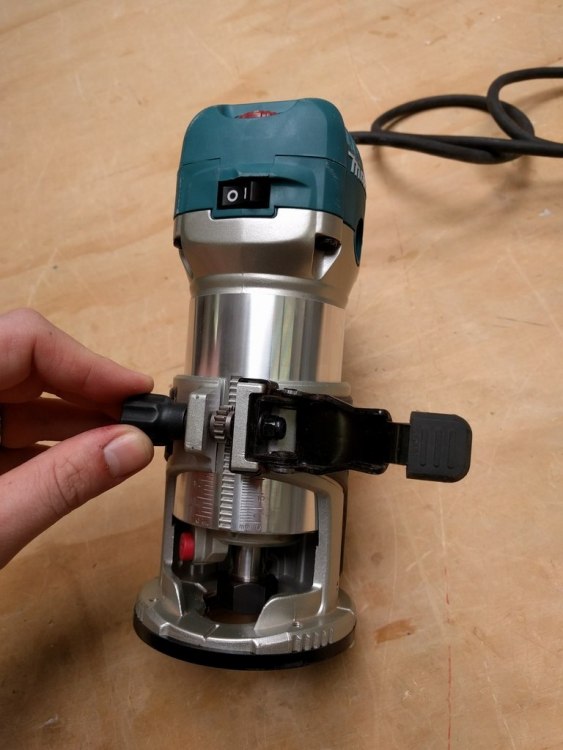 AK: With the base removed so we can install a bit, the manual spindle lock is visible. I wouldn't trust it to ensure proper tightness for operation, but I do use it to get the bit initially secured in place before reaching for the wrenches for final tightening.

CM: The larger 8mm Metric collet cones don't seem to want to retain the bit at finger tightness off the spindle lock. I also had to grind my 13mm (~1/2") spanner to fit the narrow shaft recess. The spindle lock cannot and should not be relied upon for final tightening. Even with a spanner on the collet nut. Whether that's because of the larger collet cone, I'm not sure. Still, two spanners is the only way to be sure. 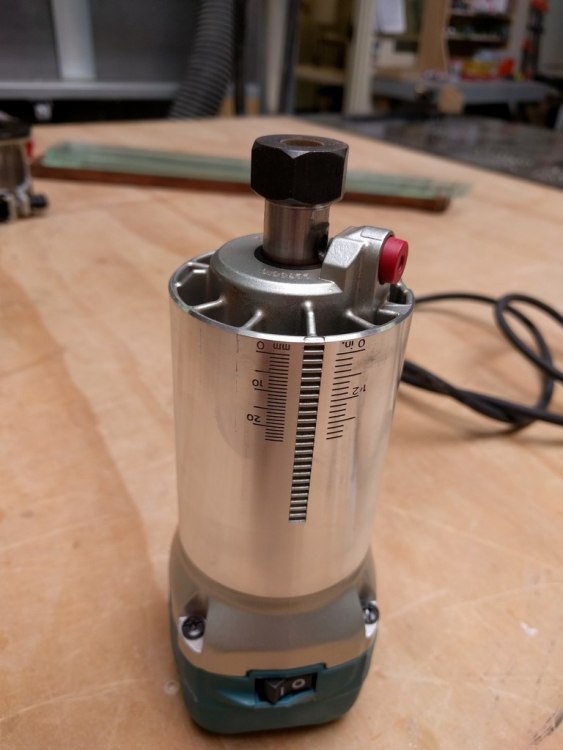 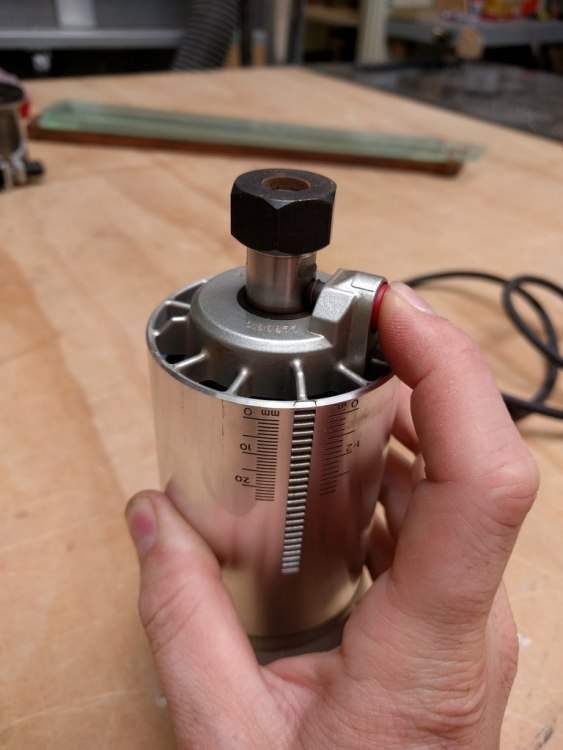 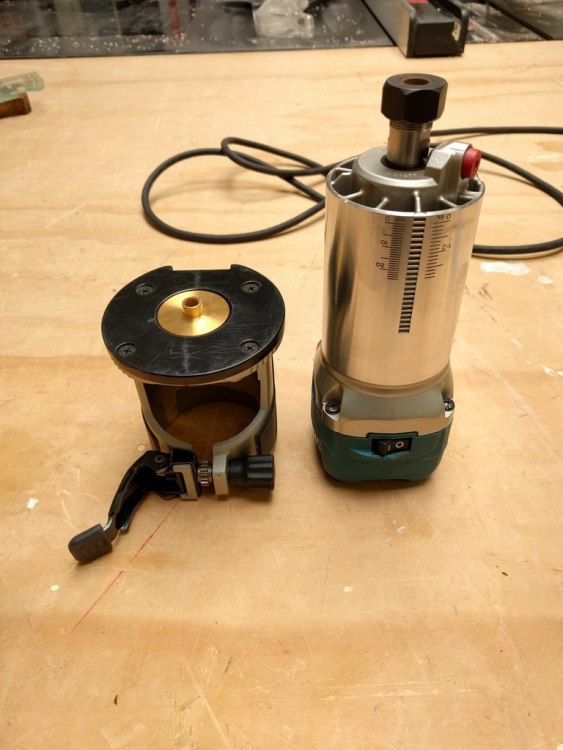 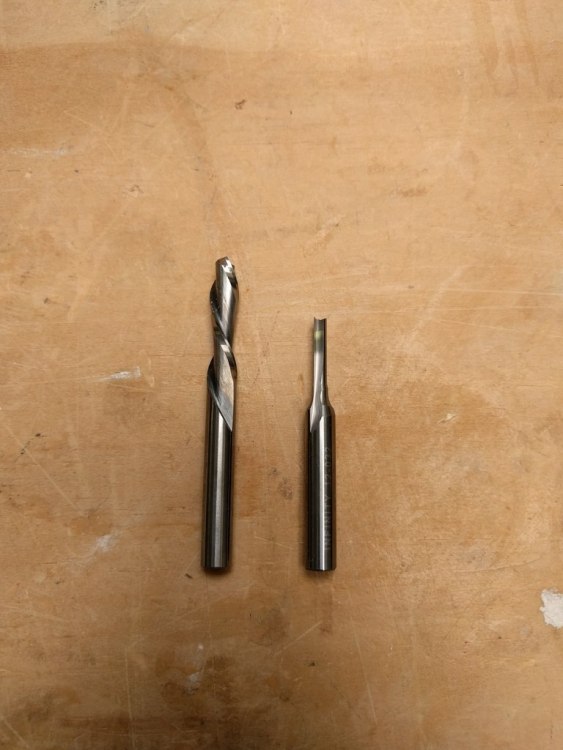 AK: First, inserting the 1/8" bit. As I mentioned above, the manual lock is used only to get the bit held in place, then I do the real tightening with the wrenches. 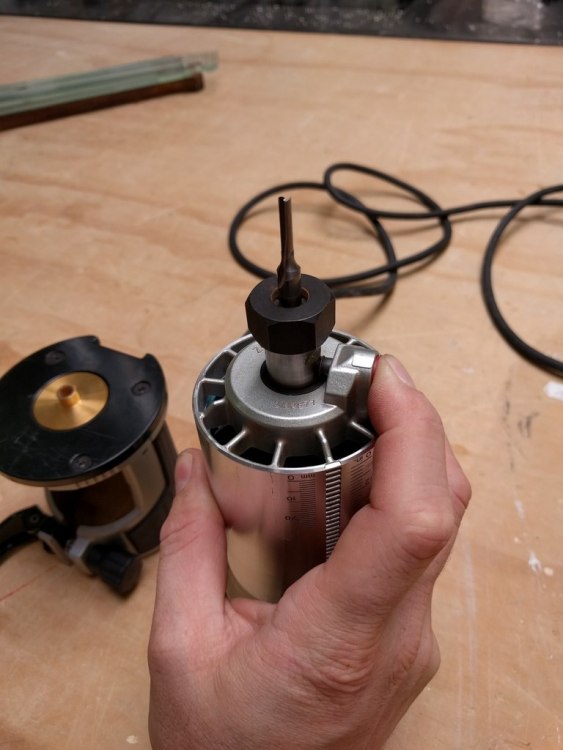 CM: As a safety note, this method of "squeezing" two spanners for tightening or loosening is the safest method. If Andrew weren't holding the camera for the photo, his other hand would be on the router body itself. Needless to say, ensuring that it isn't plugged in during bit changes is vital. 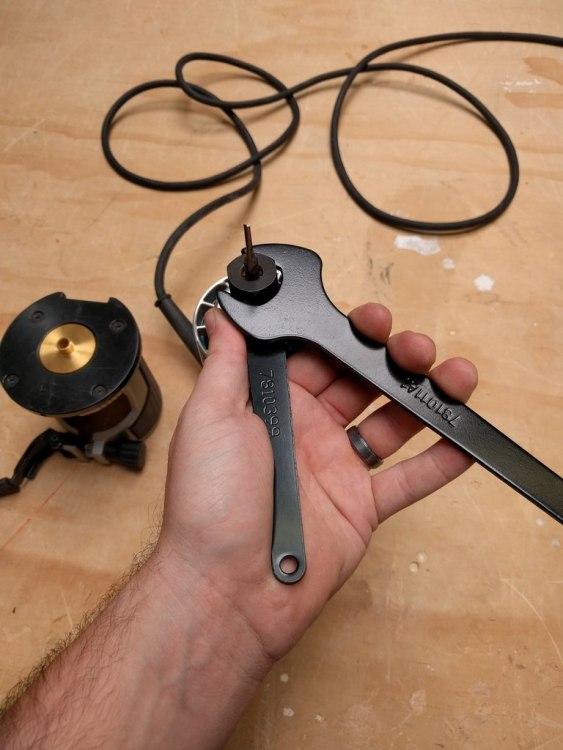 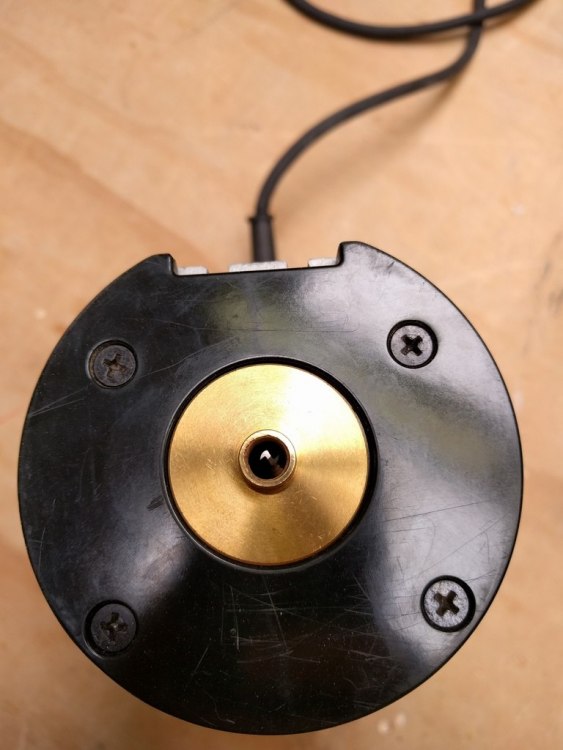 AK: Now that the router is ready to go, it's time to break out the wood and templates. I'm using Yucatan rosewood for this neck. As a true rosewood, it's fairly hard and will be a good representative of the typical woods you'd expect this router to cut through. 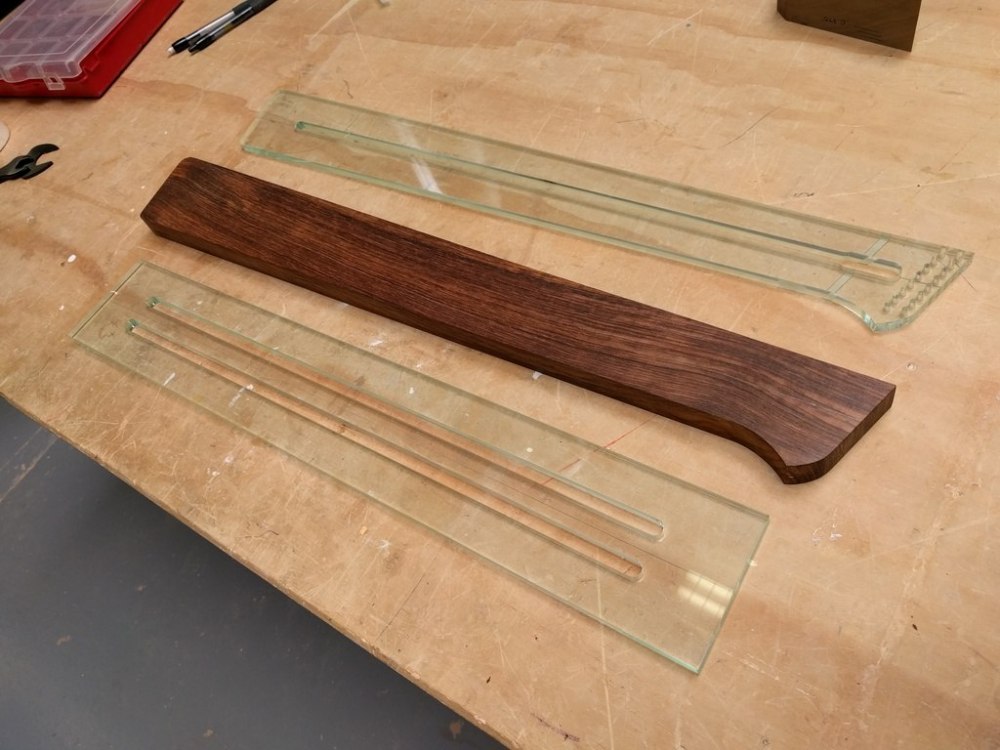 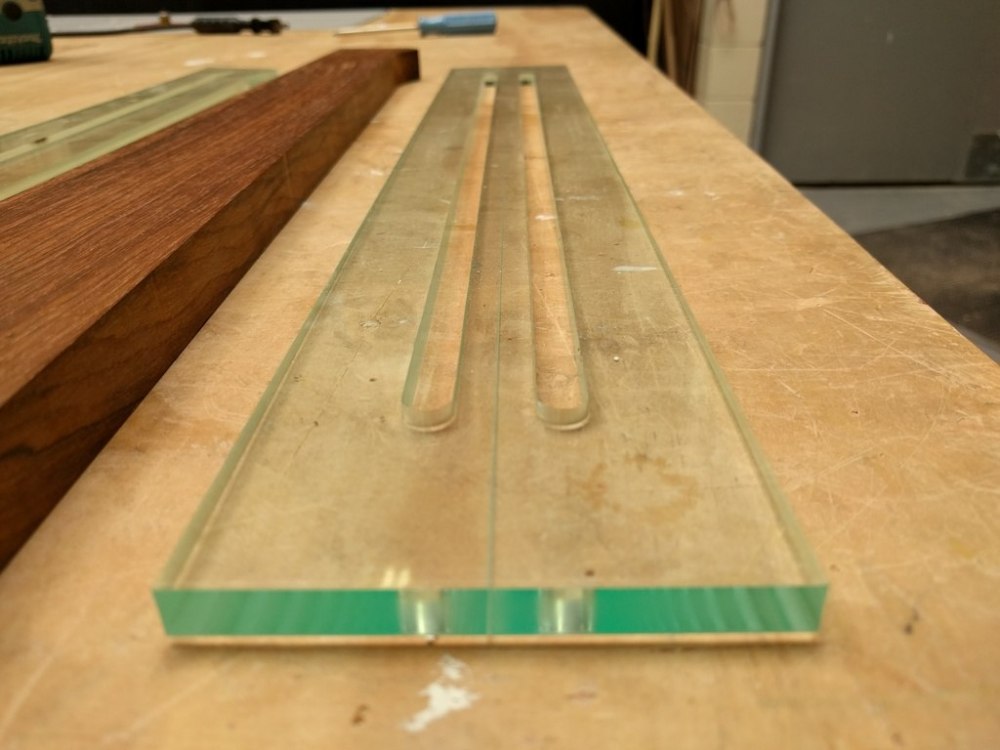 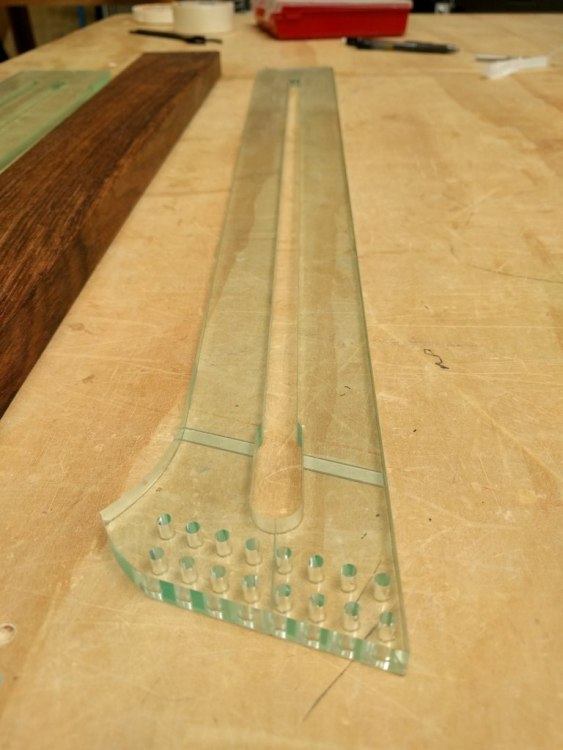 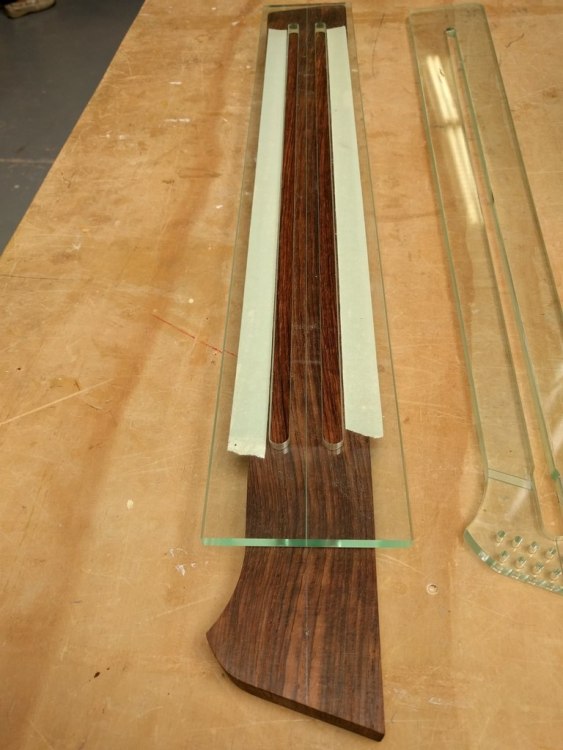 AK: For the first set of channels, I need to get to a total depth of 0.325". Since I'm using a very small bit, this needs to be done in 4 passes to minimize the chance of bit breakage. At this stage, we come to a significant downside of the Makita: lack of a useful depth indication system. Honestly, they may as well have not even etched any markings for all the good they do. To combat this, I've had to make a simple setup block. I have marked the depths of each pass I need to make and attached an unused template of the same thickness as the one I'm using at this time.  Before each pass, I simply set the bit to match the appropriate line on the block. Maybe a bit crude, but it works well in this case. 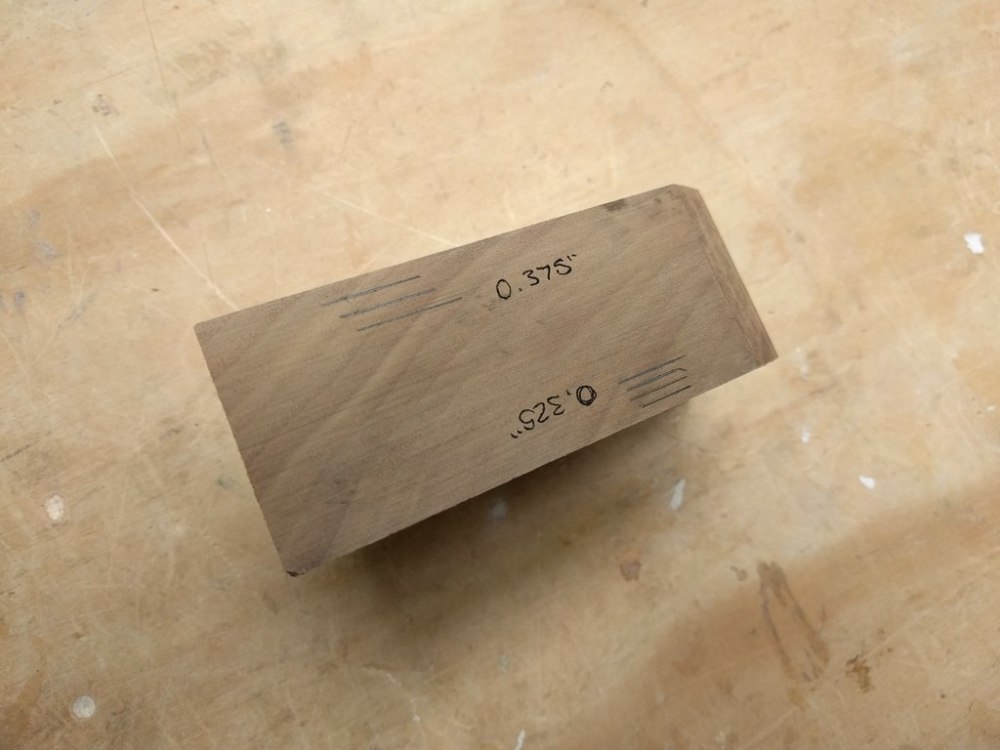 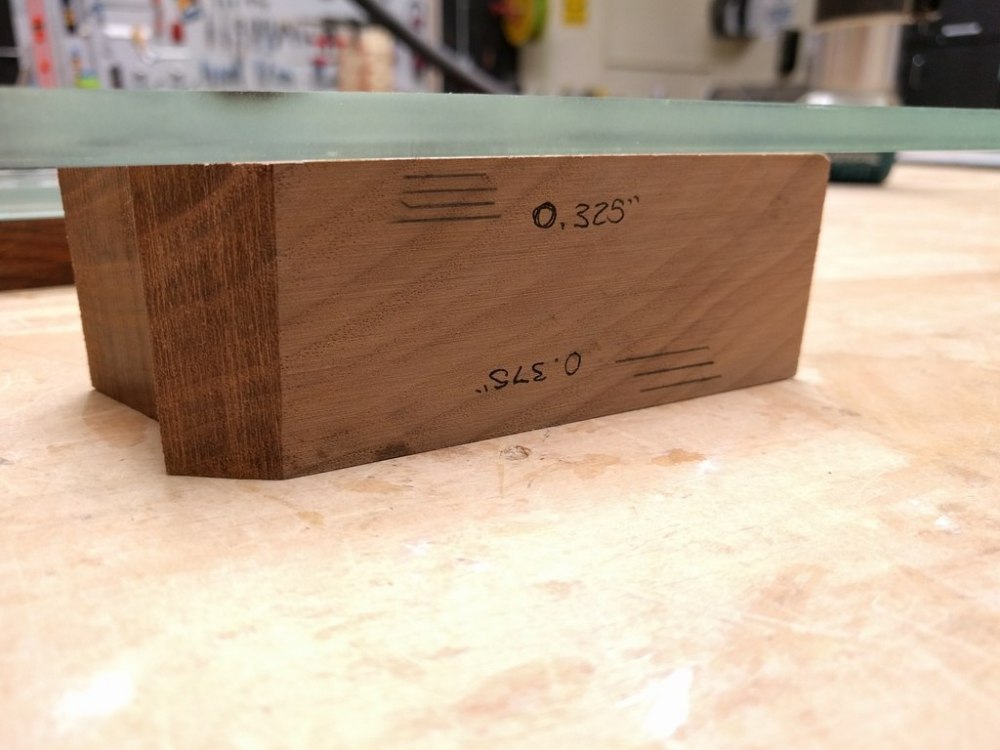 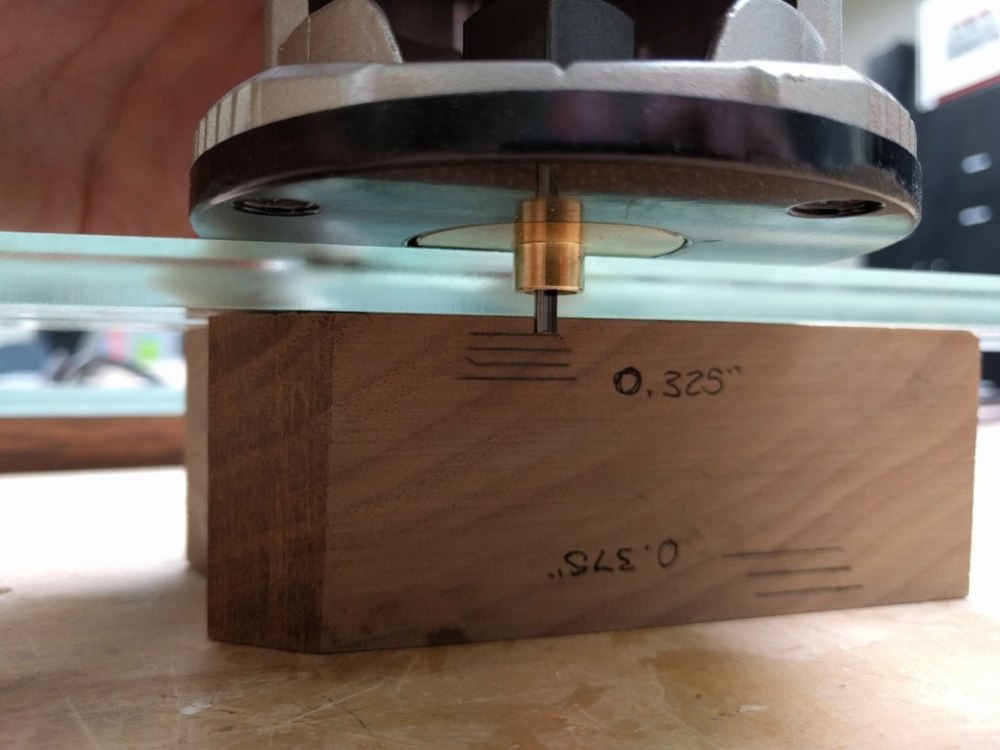 CM: Same problem here too. I have a Trend Depth Gauge to check bit depths on hand and table routers. Totally worth it! 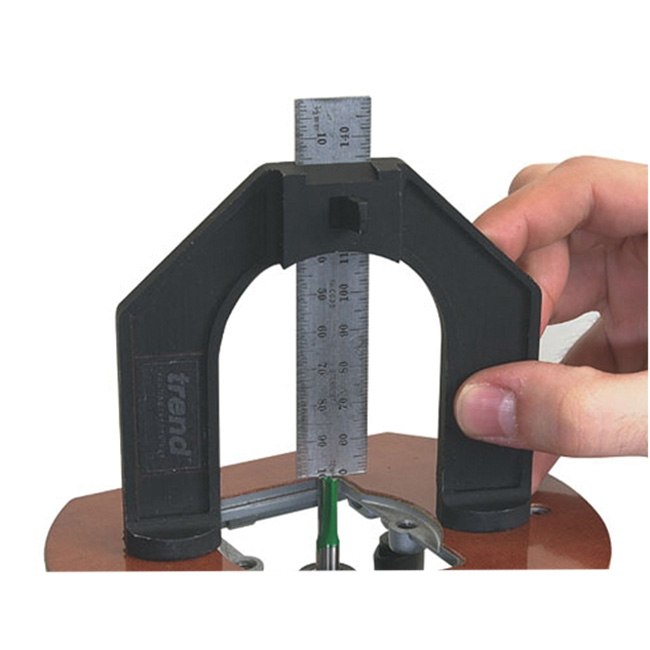 AK: And now for the first set of passes. Each channel gets 4 passes, ending up at a depth of 0.325". As you can see, the router has no trouble with this task, leaving clean and accurate channels. 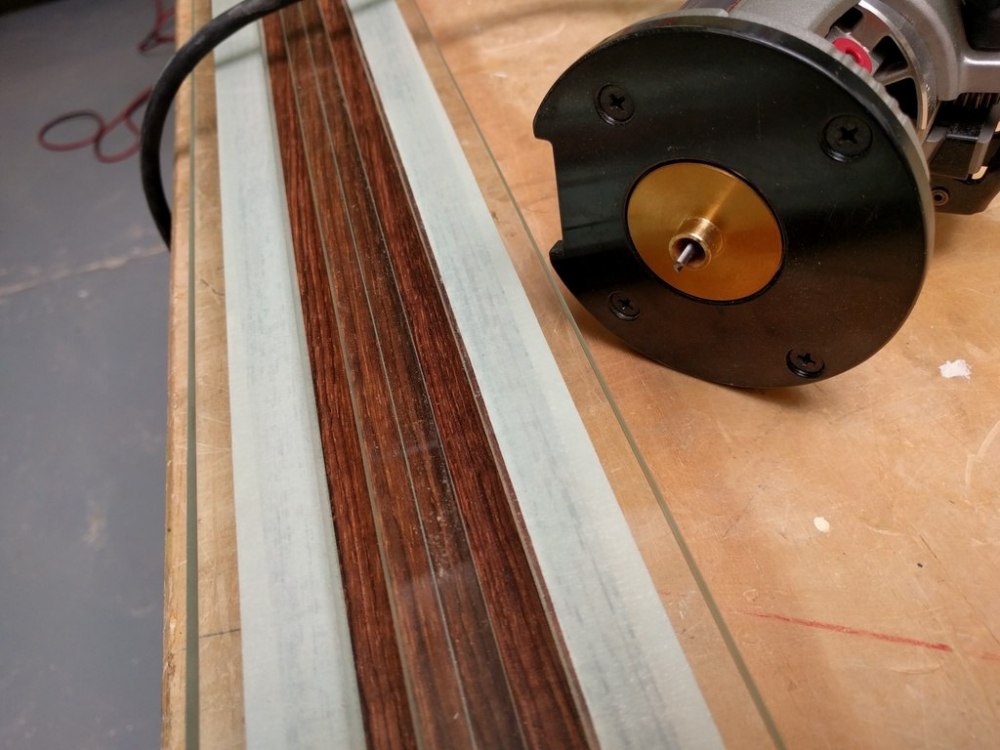 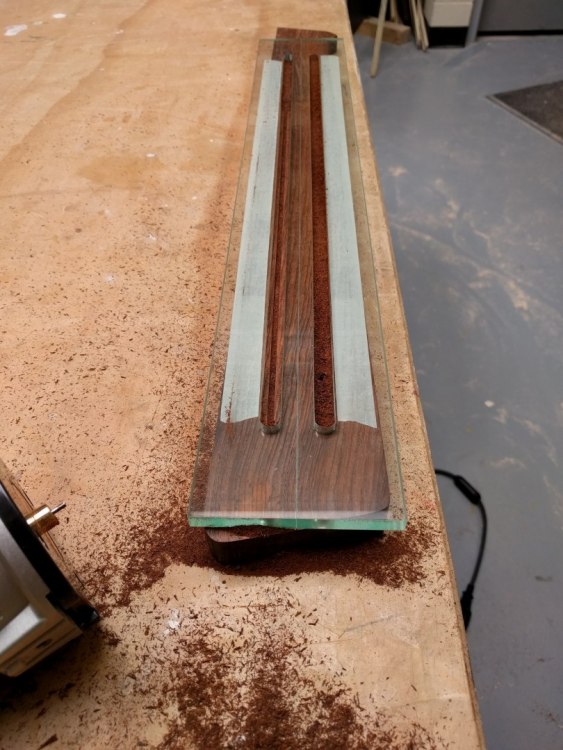 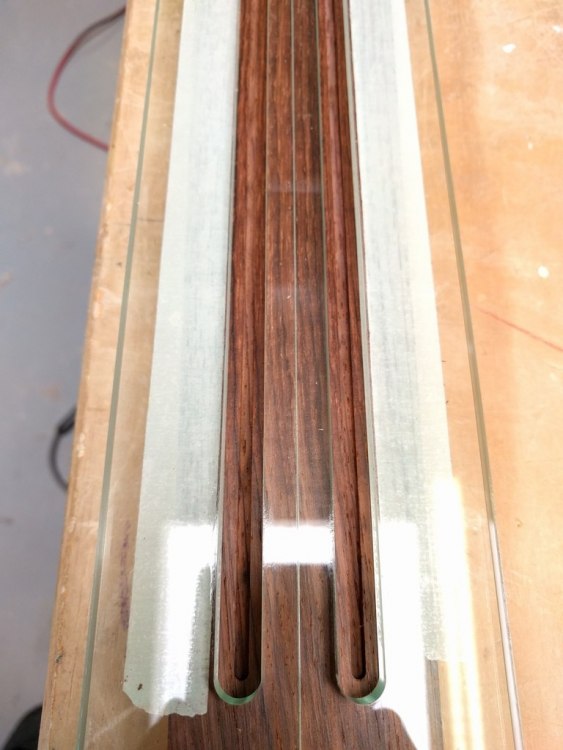 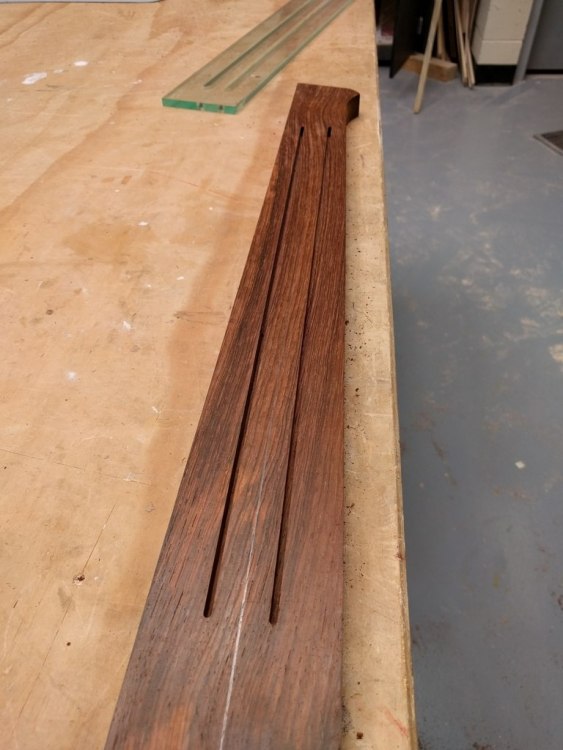 AK: Now for the truss rod channel. Templates are swapped and the 1/4" downspiral is fitted. 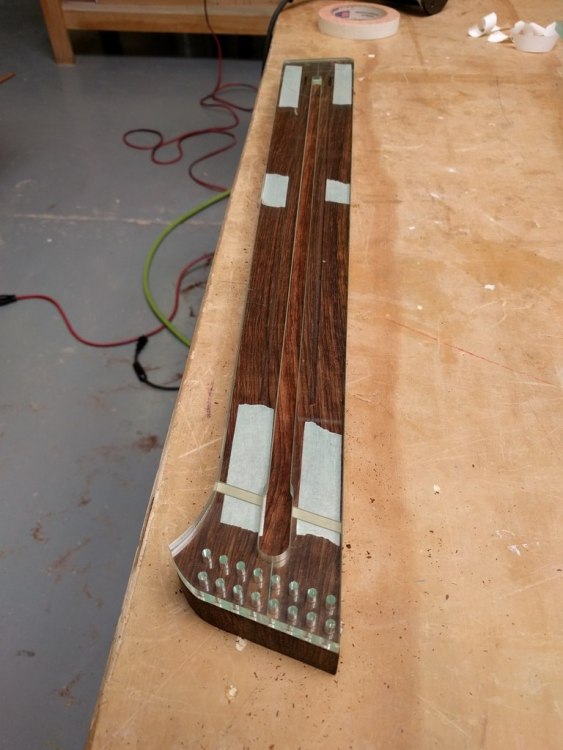 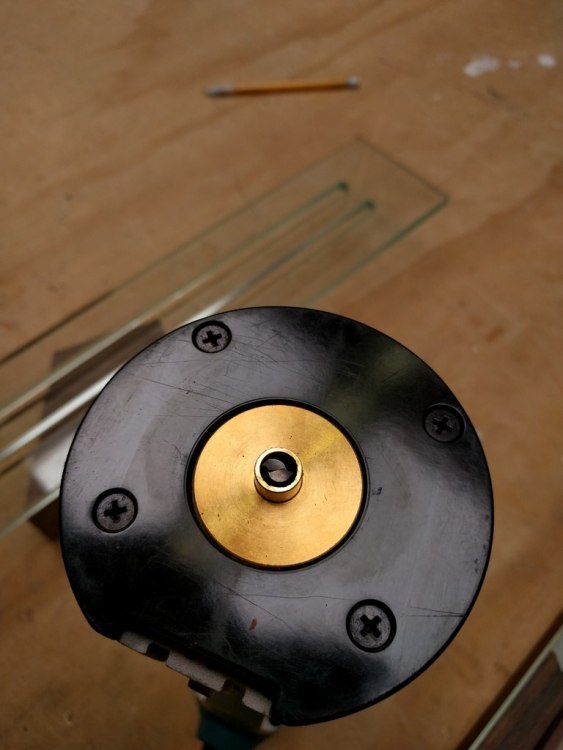 AK: Again, we end up with a clean, accurate channel with no undue strain on the router's part. 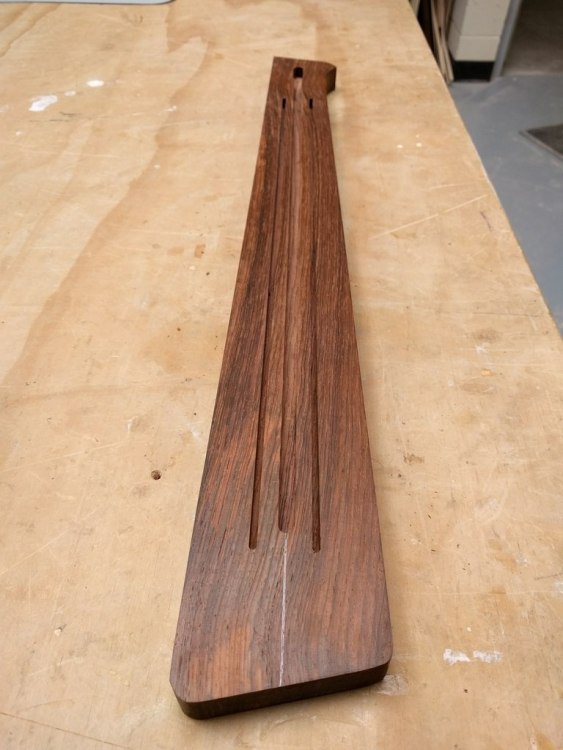 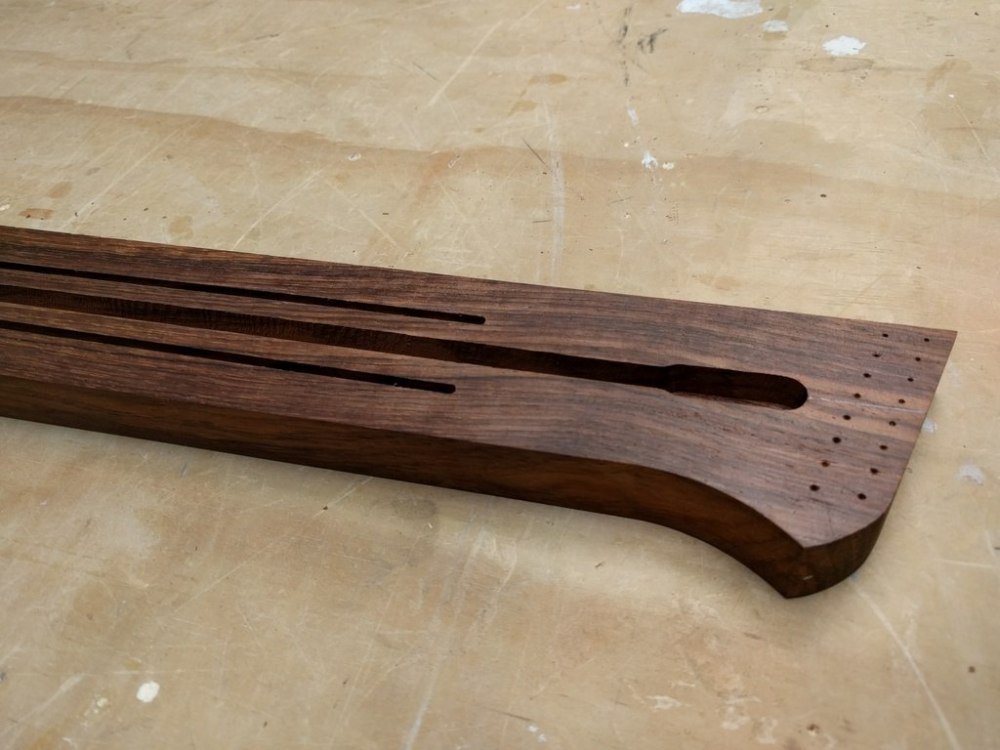 AK: If I were asked to name any complaints, I only have two. The depth adjustment markings are pretty well useless due to the lack of a definitive reference point. The scale itself is easy to read, but without another line or arrow or something on the base to measure changes with, it's not very useful. Additionally, the tiny footprint of this tool leads to a definite 'tippy' feel. This issue is just the nature of this type of router and is something Carl and I will address later on.

CM: It totally is unbalanced on the edges of cuts. For things like this it's perfect though. A really nice workhorse, so the Porter-Cable bushing set is definitely in my near future, Imperial-sized or not. Even though the depth adjustment is useless (to the point of questioning why it was included in the first place), I think that few (if any) compact units have a usable system. The plunge base accessory is a different game though. We'll look at that in Part 4.

AK: Overall, the Makita excels at small tasks like this. It cuts well and never feels out of its depth (no pun intended) as long as you understand that it's not meant for heavy material removal.