How do you expand the tonal possibilities of a traditional three-position toggle switch without resorting to fitting extra mini toggles and push-pull pots to your instrument? The Free-Way switch has the answer!

The Free-Way Switch is a unique take on the traditional 3-position toggle switch manufactured in the UK in by switchgear specialists NSF Controls Ltd. The switch first made its debut fitted to one of Jimmy Page's Les Paul® Custom model in late 2007 for Led Zeppelin's Ahmet Ertegun Tribute Concert, allowing the three humbucker-equipped instrument to achieve six individual pickup combinations using an ingenious traverse toggle mechanism. By flicking the actuator perpendicular to its normal direction of travel an extra 3 positions become available to the player, doubling the tonal permutations offered with a standard 3-way toggle, without resorting to installing push-pull pots or mini toggles.

The most recent incarnation of the Free-Way switch expands on the flexibility and build quality of the original switches to provide more diverse switching options in a long-lasting, easy to use package. Free-Way boast an endurance of 1 million operations over the lifespan of the switch. The range features two versions - the 3x3-03 with 15 termination points and the 3x3-05 with a whopping 28 termination points. A sub-variant of the 3x3-03 is also offered - the 3x3-04, specially made for JJ Custom Works, which features fixed pickup combinations for a dual humbucker guitar incorporating series, parallel and coil split functions. All switches are available in nickel or gold finishes and can be purchased with a variety of different coloured tips. 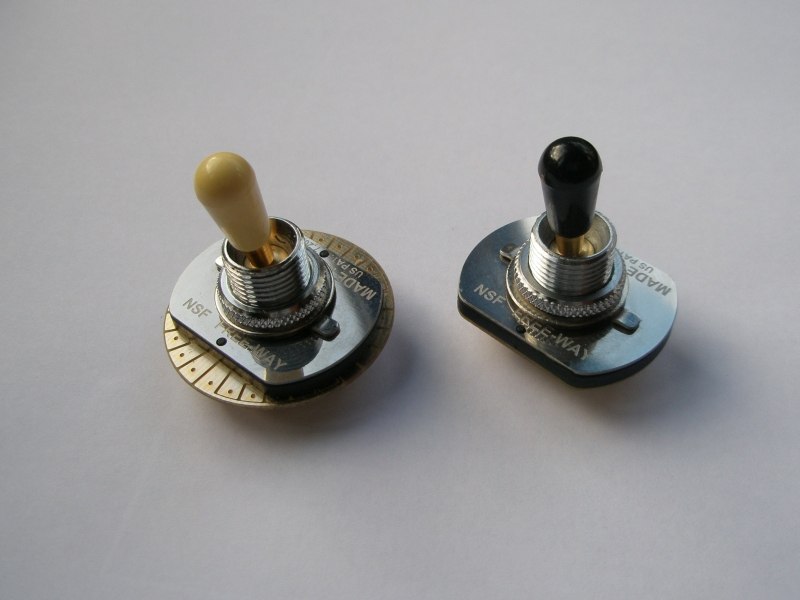 From the outside the switch doesn't look any different to a normal 3-position toggle, making it attractive to those people wanting to upgrade their guitars without changing the appearance. The only hint that the switch has some tricks up its sleeve is the actuator leaning slightly to one side. Around the back of each switch, the mechanism is a sealed unit inside a small metal canister. Each termination point for the contacts of the switch is presented on a small printed circuit board with gold-plated solder pads. Each version of the switch also includes a larger pad specifically marked for ground connections (labelled as 'GD' on the circuit board), which also doubles as the grounding connection for the metallic parts of the switch. Due to the overhang of the circuit board the switches are slightly wider than a traditional toggle, with the '05 model being the largest of the two, but much shallower being only half as deep. Despite its bulk the larger '05 model is designed to still fit into the toggle switch cavity of a Les Paul.

The '05 model can be considered the equivalent of a 6-position rotary switch, where six incoming signals can be sent to the outgoing side of the switch one at a time. The switch contains two independent halves, each containing  a one-of-six selector allowing for a wide range of pickup combinations, splits, kill switching, passive with piezo pairings and even options for Strats, HSS and HSH-equipped instruments . 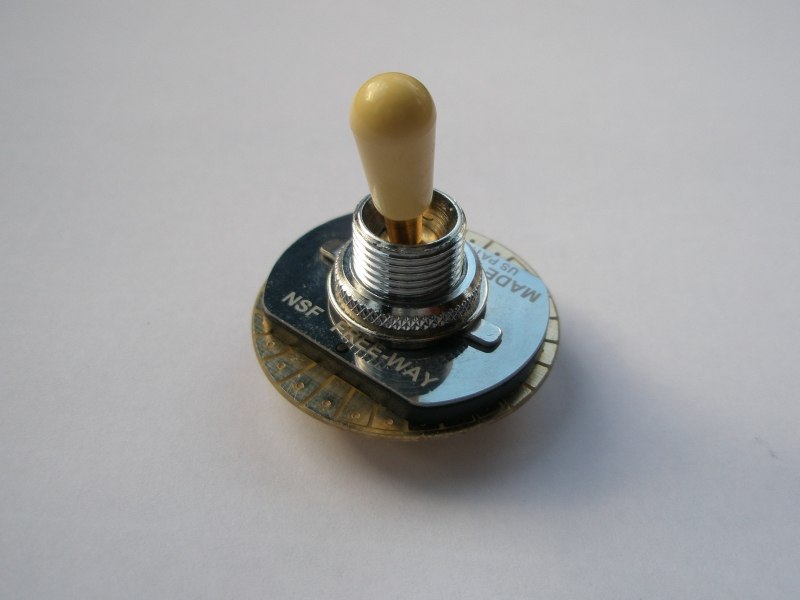 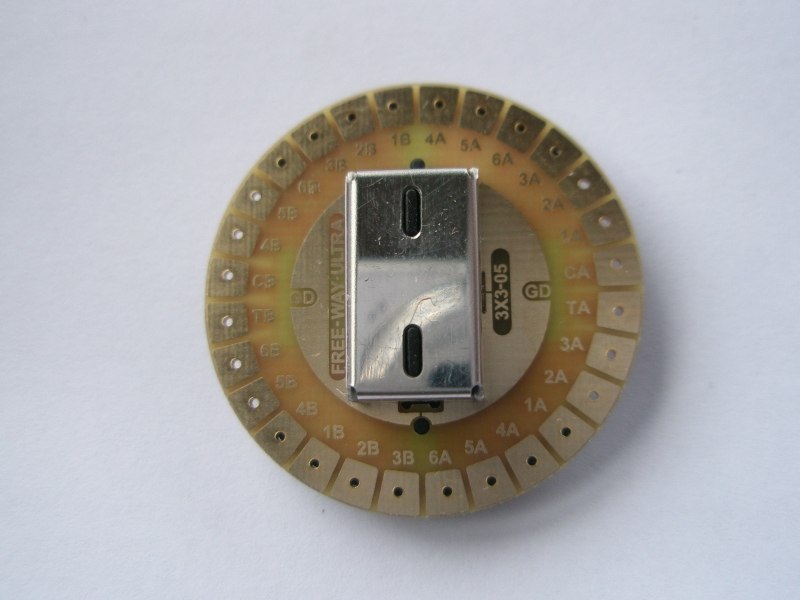 The '03 model is actually quite a complex beast, despite being half the size of the '05. The first three positions on the '03 behave the same as a standard 3-way toggle, providing Signal A, Signal A+B and Signal B combinations. Moving the switch to the next group of three positions adds an additional layer of signal pairings but operating under a slightly different system, expanding the combinations to Signal C, Signal D+E and Signal F. As for the '05 model, each half of the switch is completely independent to the other, and a total of 12 different switching combinations is under the control of one lever. 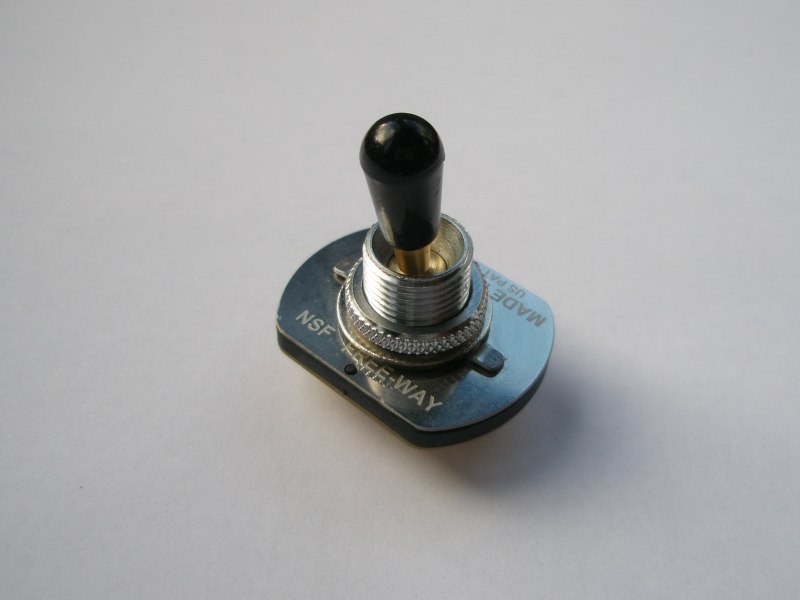 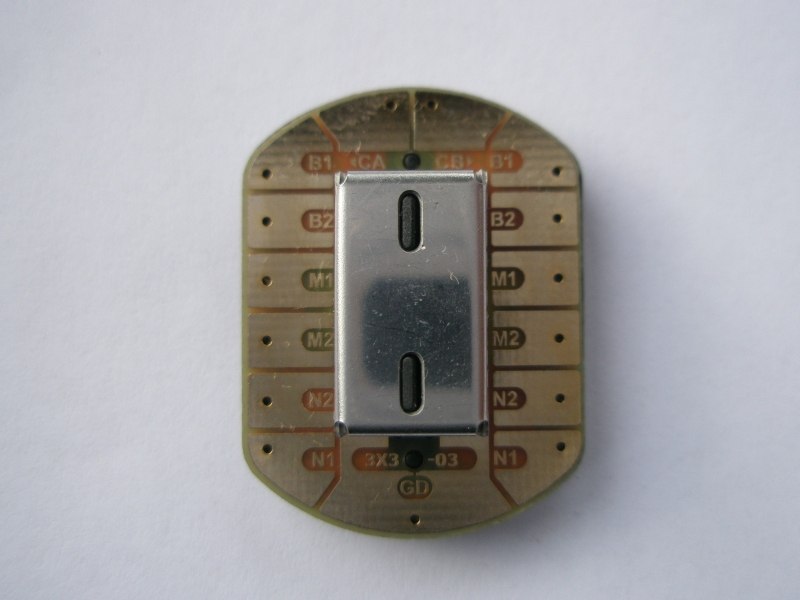 With such a bewildering array of combinations possible in one switch it's easy to get lost trying to figure out exactly which contact does what for each position, so Free-Way helpfully provide a pack of example wiring diagrams covering various pickup combinations to help get the ball rolling. The schematics are clearly laid out and only require some minor interpretation on the part of the user to ensure that pickup wiring colour codes are correctly translated from the ones shown in the diagrams to those fitted to your guitar.

Both switches come with plastic tips that can be unscrewed from the shaft and exchanged for different colours - cream, black and amber tips are available. The thread on the shaft is quoted as M3.5, but unfortunately this appeared to differ from the Switchcraft and no-name Allparts toggles I had on hand

With the trusty soldering iron warmed up I decided to dive right in and retrofit the '03 switch to one of my SR-series guitars. This instrument is fitted with two Seymour Duncan 4-conductor humbucker pickups. I normally keep the control layout on these guitars fairly sparse and basic, with only a 3-way toggle and single volume pot, but the option of adding some coil split functions to this instrument while keeping the control layout uncluttered is attractive. The original wiring layout of the guitar is shown below: 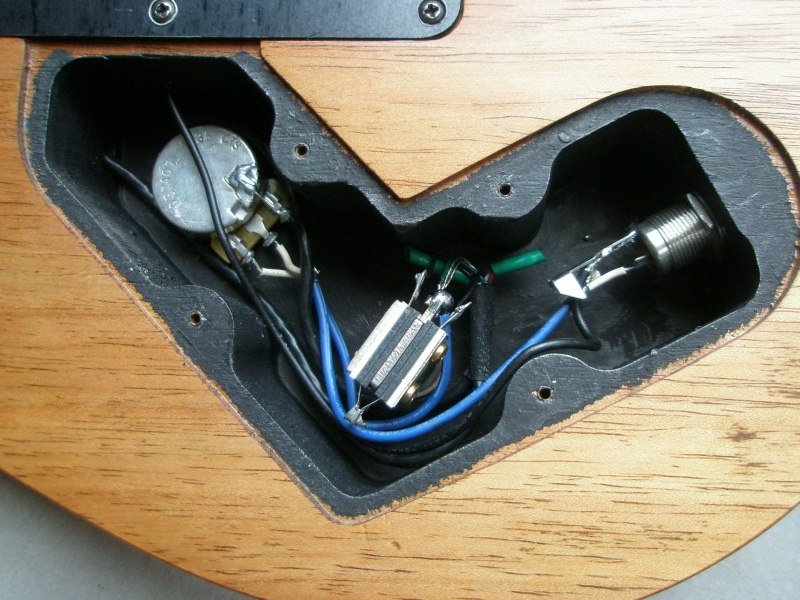 To get things started I turned to the example wiring schemes provided by Free-Way, narrowing down the choices to those that allowed me to retain the standard bridge humbucker/bridge + neck/neck humbucker options that the original toggle provided, while adding some interesting coil split functions in the alternate group of three positions.

As the wiring for these switches is quite a bit more involved than a standard toggle, it pays to do as much work on the switch as possible outside of the instrument. A small piece of MDF with a 1/2" hole drilled through, clamped to the workbench makes a quick and effective holder for keeping these switch from twirling around on the bench while trying to solder wires to the pads: 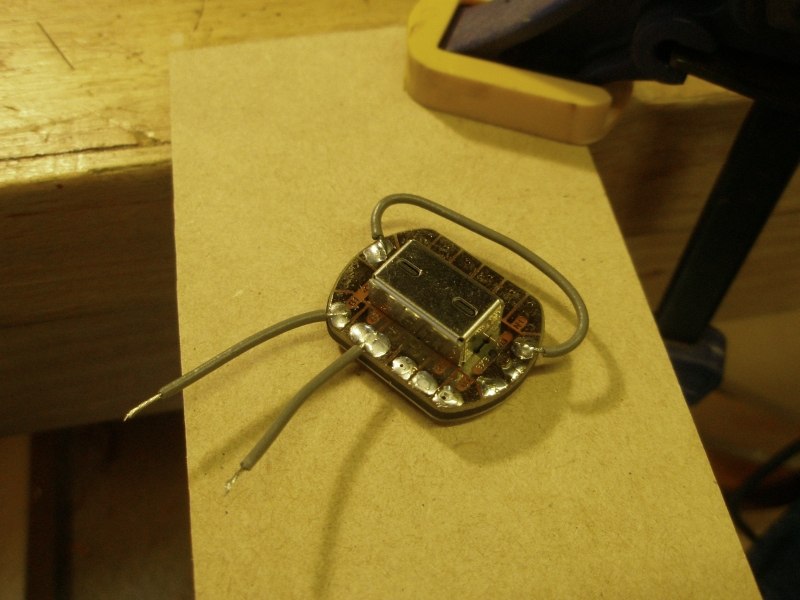 A few notes on working with these switches. Some of the wiring schemes require that adjacent pads are soldered together. The gold plated pads are spaced deliberately close together to facilitate this, and unless care is taken it can be easy to inadvertently bridge two pads together by applying too much solder.

Your choice of soldering iron can make a big difference to working with the delicate nature of these solder pads. A fine point, temperature-regulated iron is recommended to make easy work of soldering wires to the termination points, while minimising the risk of damaging the gold pads by overheating.

Good soldering technique will assist in fitting these switches into the guitar too, as space inside the cavity can get cramped very quickly. Free-Way suggest that wiring all the solder pads to external screw terminals can assist in installations where the user wants to try out several different switching schemes without having to re-solder the switch multiple times over. However, the requirement for a generously-proportioned control cavity may prevent some users from achieving this, as was the case in my situation.

Making several connections to one pad can be tricky too, as previously soldered wires have a tendency to spring off once the next wire is added to the connection. Some careful manipulation of connections is often required to get everything to stay put. Alternatively it can be beneficial to plan ahead where possible by twisting multiple conductors together and then soldering the bundled wires to a pad in one go.

After an hour or two of careful soldering, poking and prodding, the switch was finally bolted into the cavity and the wiring taken for a test drive: 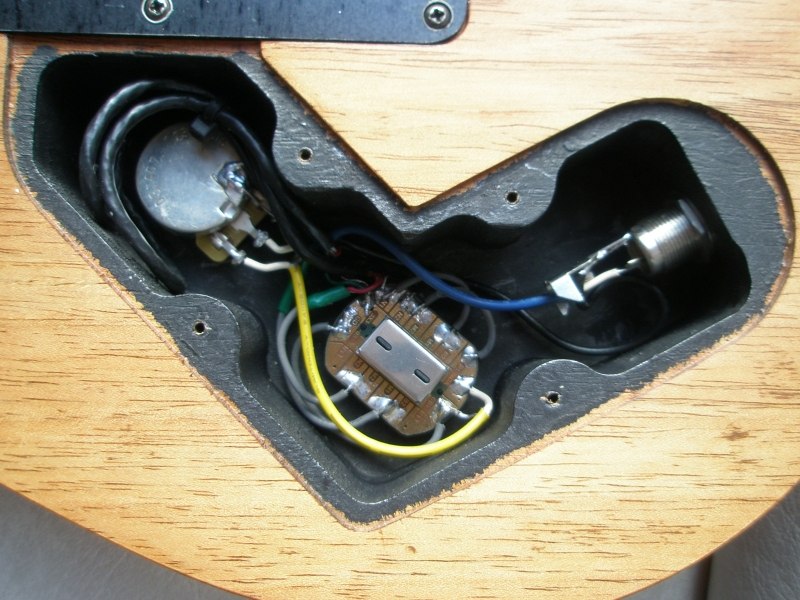 With the actuator in the down position (away from the player) the toggle operates the same as the basic 3-position unit it replaced, with bridge humbucker/bridge hum + neck hum/neck hum combinations. With the particular wiring scheme I chose to use, pulling the actuator upwards engages the three alternate combinations of bridge hum + neck split/bridge split + neck split/neck hum + bridge split.

The physical action of the switch itself is positive, with a decisive latching feel as the toggle is moved between positions. Pops, clicks and other extraneous electrical noise is as low as any other good quality toggle switch. Quickly changing between the two traverse modes takes a little getting use to, but otherwise the usefulness and practicality of the switch is immediately apparent. As mentioned earlier, the outward appearance of the switch is virtually indistinguishable from the toggle it replaced: 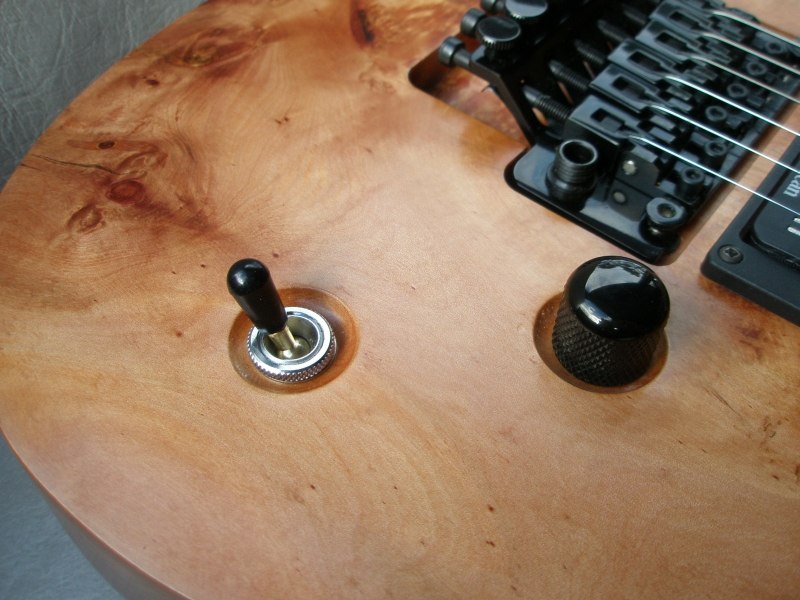 The Free-Way switch makes for quite a powerful upgrade to a guitar's pickup selection system that will appeal to people wanting to create new and unusual switching schemes without resorting to adding multiple controls. The quality of the switch appears to be very solid, and while working with the wiring can at times get a bit cramped, it is well worth considering as an alternative to a traditional 3-position toggle, or even as a substitute to a 5-position blade switch.

Thanks go to Free-Way Switches for providing the units used in this product review!