Router guide bushings are a powerful addition that can extend the capabilities of your router. How do we select the options that are best for our work, and what do they offer in return? In this Router Basics article, we look at the lowdown on this essential accessory.

Much as a router is an essential upgrade to any luthier's arsenal, guide bushings can upgrade your routing work to a new level of versatility. They allow for safer working options and in combination with well thought out templates/jigs, a more powerful way to rout work; often in ways that are impossible with standard bearing-guided cutters.

Anybody that has experience in fine woodworking outside of instruments may have used or heard of legendary work jigs such as the Leigh Dovetail system or similar. Systems such as these leverage the power of router guide bushings to produce perfect dovetail joints in cabinetry work or carry out other complex precision tasks. Whilst we don't see as much of that level of work in musical instrument making (perhaps in DIY cabs/amp heads or acoustic neck dovetails) it doesn't mean that guide bushings are of no use to us. Nothing could be further from the truth.

Breaking down how a guide bushing functions and what advantages they have to offer for our work allows us to develop jigs and systems that are just as meaningful and powerful. Guide bushings can produce complex pickup routs in single passes, produce shallow recesses for bridges/plates or allow cutters to be used in ways that are impossible otherwise.

Guide bushings are a capable and inexpensive upgrade, however they don't see their way into instrument-making as much as they should. This introduction is designed to raise awareness of their importance and how to select the right guide bushing system for your router. Subsequent articles in the Router Basics series will provide practical working examples and hopefully inspire you to use them in new and original ways to work smarter.

So What Is A Guide Bushing?

Guide bushings are a distant relative of the bearing found on a bearing-guided cutter. Anybody that has done any kind of work around an instrument with a router will know how a bearing-guided router cutter works; the cutter's bearing runs against either the workpiece or template, whilst the cutter itself shapes a specific profile into the wood. For jobs like flush-trim cutting, template copy routing or adding chamfers/roundovers, bearing-guided cutters are normally the best solution. Many processes around an instrument soon show the limitations of bearing-guided cutters, easily leading to tool bloat ("a different cutter for every single job") or seemingly-simple jobs becoming a series of steps to get past the goal. Guide bushings allow a small range of simple inexpensive cutters to become powerful around a wide range of different tasks by taking over the function of a guide bearing. This is not to say that guide bushings make bearing-guided bits obsolete; more that each one can be more appropriate than the other in certain situations. 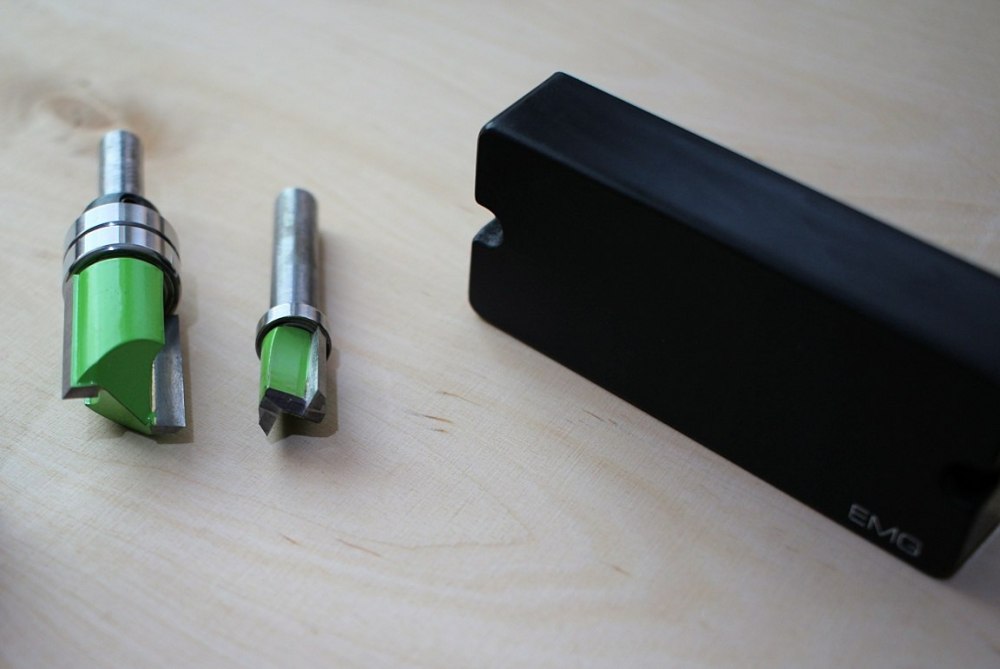 Okay, Fine. So What Is A Guide Bushing?

Guide bushings are a simple flanged metal or plastic collar fixed to the router base. The flange or bracket sits below the base surface whilst the collar extends a short distance below it, and is the part which runs against the template. The cutter plunges freely through the centre into the workpiece allowing for cuts at any depth. Secondly, the cutter no longer needs to have a minimum diameter unlike bearing-guided bits whose diameter is defined by the minimum physical size possible with bearings. 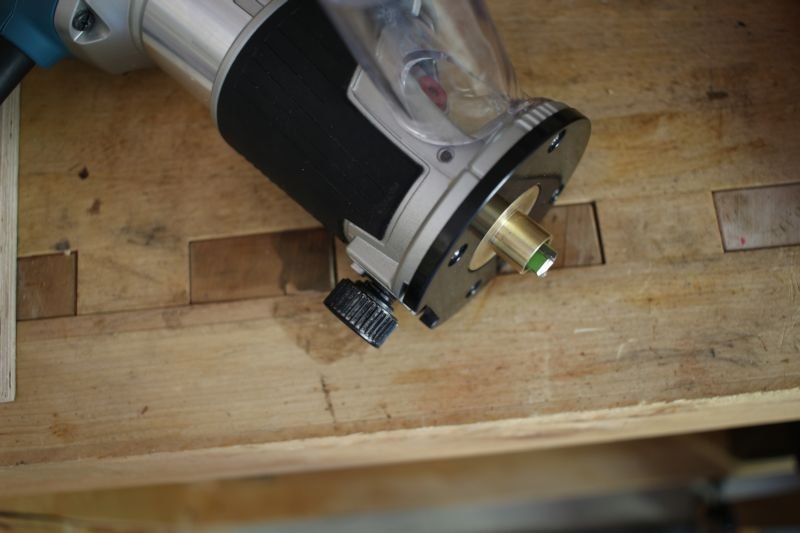 This sounds fantastic; we can use any diameter cutter that will fit through a bushing and take cuts any any depth we choose. In most way it is, however there are considerations to be made when designing templates; the diameter of the bushing is larger than the cutter so there's an offset to calculate in. As tradeoffs go, this is a small one but seems the scariest to most people. We'll look in specific detail how to create templates that account for offset as part of later tutorials in Router Basics. For the moment, let's concentrate on how you can get your router equipped with an appropriate set of bushings!

Choosing Your Guide Bushings (or do they choose you?)

To the uninitiated, router guide bushings can seem like an impenetrable puzzle of sizes, brands and systems. Fundamentally, three broad types of bushing system are available, all of which perform the same function but vary in how they attach to your router base.

Most manufacturers produce bushings specifically for their routers which are usually simple and quick to fit, but restricted to working only with routers of that brand. Brand-specific bushings can be a premium-priced accessory, however the convenience of a bushing that works straight out of the box has to be balanced off with cost, especially if you use more than one router from different brands. The range of bushings that a manufacturer makes available will be limited in comparison with more universal systems, however this isn't to say that you are stuck without options. Most jobs that guide bushings excel at can be achieved using one or two workhorse bushings rather than an expansive collection of them. 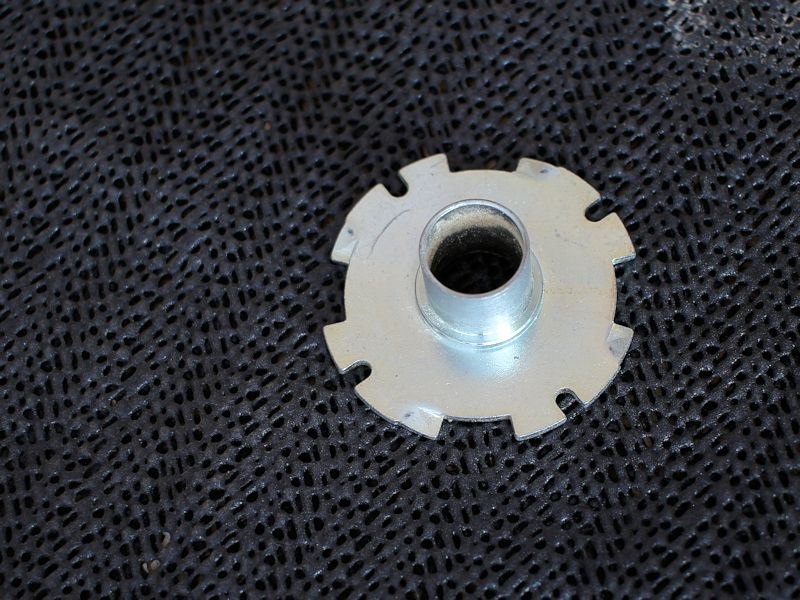 Bosch standard 17mm guide bushing. This one has almost built Rome over the last few years.

Several manufacturers (notably, DeWALT/ELU, Hitachi, Black & Decker and Makita amongst others) have adopted an unofficial standard in the Porter-Cable bushing style for many of their routers. They also happen to fit Porter Cable routers. Fundamentally, a Porter-Cable style bushing is a threaded flange with a knurled lock nut that fits into a 35mm (1-3/8") recess with a 30mm  (1-3/16") through hole. Larger bases have either a 60mm (2-3/8") adaptor plate or a base-specific adaptor insert. Being a mostly US-based standard, Porter-Cable style bushings are overwhelmingly available in Imperial sizing only. This is in spite being originally based on a Metric fitting *cough*. That isn't a problem for anybody with two brain cells (and a calculator) to rub together, however. If you work in both systems, there's no time-wasting argument to be had.

Porter-Cable is now my weapon of choice because of its simplicity, and that fact you can pick up a good set for a song on eBay, Amazon, etc. The broad market acceptance and availability of the Porter-Cable style has driven the price down, and they're so simple that there is zero qualitative difference between branded or off-brand. Other than friction burns to your wallet.

A number of routing systems such as the Whiteside 9500 router inlay kit are based on the Porter-Cable style of fitting, making Porter-Cable a great option if you choose to go for a standardised system. The simple 30mm/35mm fitting dimensions make it an easy job to produce custom bases that accept a Porter-Cable bushings using two commonly-sized Metric Forstner bits. 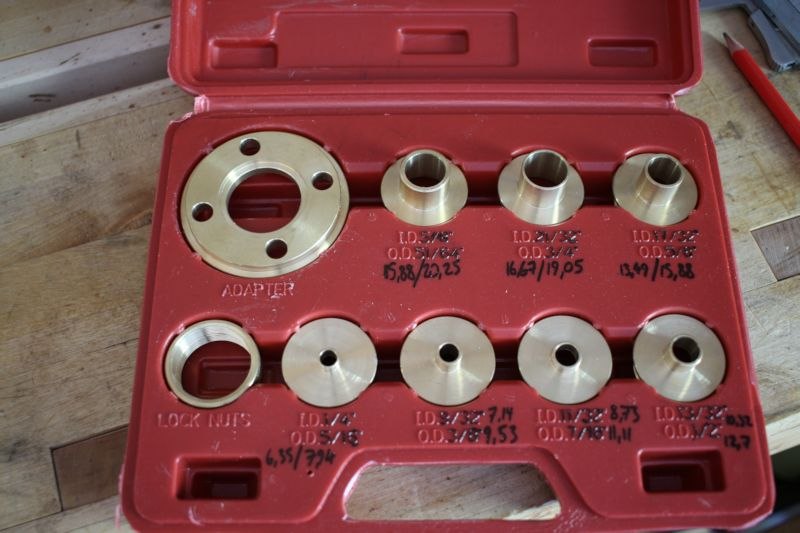 Universal replacement baseplates such as the Trend Unibase allow you to move beyond brand-specific fittings or even use guide bushings for routers not originally designed for them. Like the unofficial Porter-Cable standard, the Trend sizing has its own set of dimensions based off the 60mm diameter flange which has become a "second standard" of sorts. To my knowledge, Trend provide the largest range of Imperial and Metric sizings of all systems, and off-brand bushings are also available. Check for compatibility with your routers! Unibases are an excellent blend of universality and turnkey convenience for anybody that doesn't want to mess around making new sub-bases for their routers. I however, do like making new sub-bases for my routers.

Personally, I'm not too much of a fan of steel guide bushings or mounts that require screws. The base itself is fitted with threaded brass inserts (brass is naturally "sticky" and locks threads) which retains the screws better, however I imagine that even the slightest cross-threading to those inserts will leave you needing a new sub-base. I'm not the most graceful of people, and I imagine I would fall afoul of that sooner than most....nonetheless, the Unibase is as out-of-the-box as you can get for some. Worth considering! 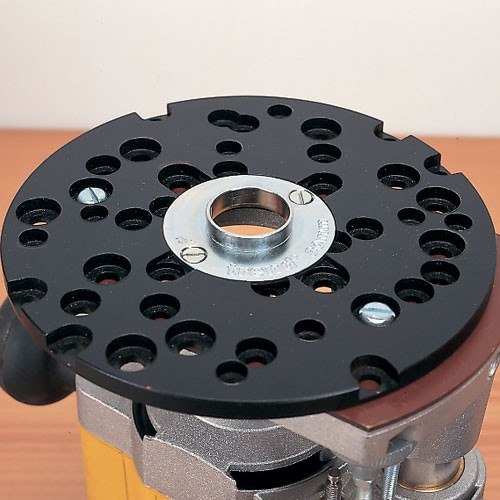 The Porter-Cable system is a straight drop-in solution for my Makita RT0700C router. The fixed base was designed to accept a bushing with zero modifications. Drop the bushing into the baseplate and screw on the knurled lock ring from the other side. This is easy when you can remove the motor from the base unlike most plunge routers. 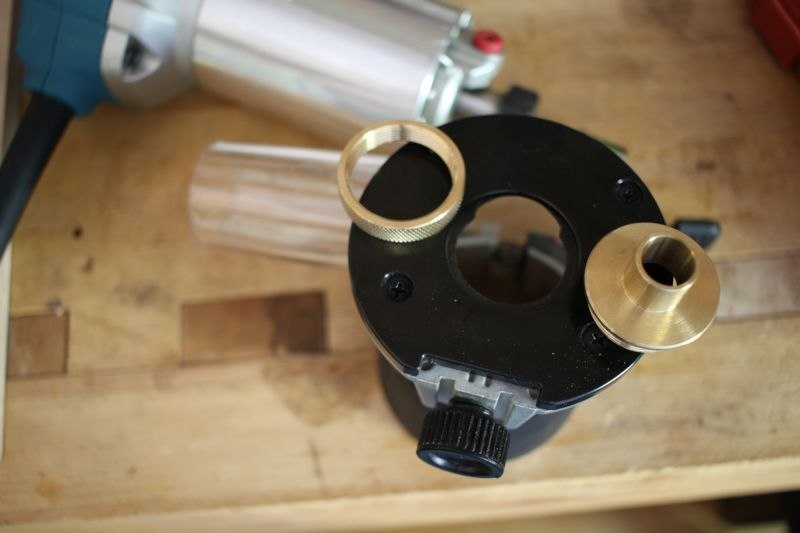 Brass is a soft but sticky metal. Steel bushings benefit from snugging up tight using a pair of pliers as steel vibrates loose, however hand-tight works fine for brass threading.

The plunge base of my Makita RT0700C has a wider opening in the baseplate, designed to accept the "standard" adaptor plate. The plate is held in place by the two screws either side whilst the guide bushing mates with the adaptor itself. 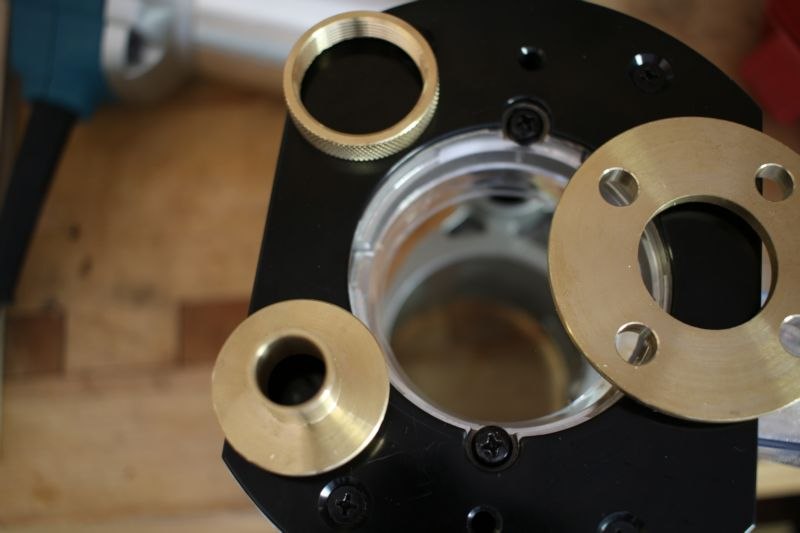 Given how inexpensive the guide bushing set was, it's a bona-fide bargain upgrade for this router's working capabilities. 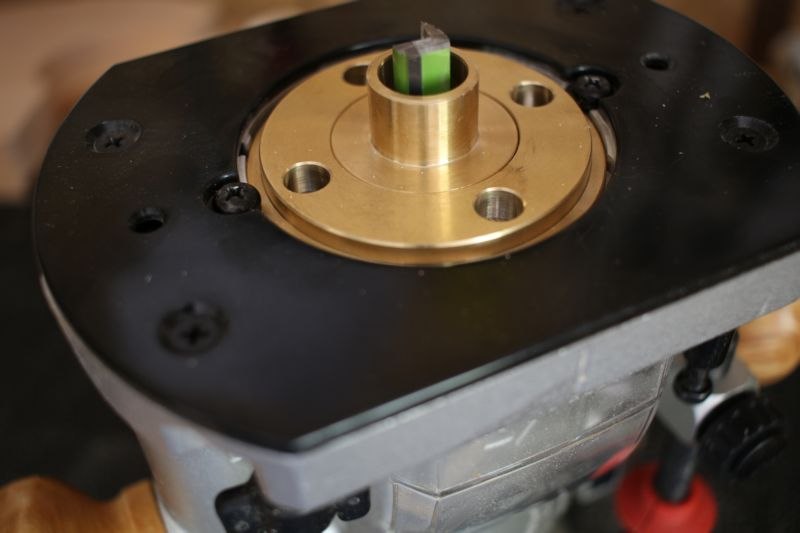 Do I Have Need Of Guide Bushings?

Yes and no, I think. They're not impossible to get by without, and in fact many luthiers go through their entire careers without use of them. Take that how you will of course. As a way of extending the capabilities of what you are able to do right now, they're an important consideration and worth some thought. The same week as I write this, I had a perimeter flush-trim routing job which would have benefitted from a bit of guide bushing action to make safer by reducing excess material closer to the finished edge. I decided not to use one, however it would have been a simple 5-min job that could make the difference between a job going pear-shaped and going perfectly. It went perfectly anyway, but that few dollars of brass might have been what saved a few dozen dollars of wood getting blown to pieces. We'll look at that case in a full tutorial elsewhere in the series. Do you need to be using guide bushings? It's probably better to ask why you're not using them....

Do I Need Just One Or A Full Set Of Guide Bushings?

That's up to you really, and that all hinges on how far you want to take your work in terms of complexity. A single bushing size will open up a lot of working possibilities on its own. For example, my old crappy router only accepts Bosch-made bushings unless a custom or universal baseplate is added. I've done many jobs with that successfully using the single 17mm bushing that came with it! Some jobs do make more sense when you size the bushing nearer to the cutter, and vice versa. Equally, you can make all kinds of jigs for guide bushings based around one very specific size. I've had a lot of mileage out of that 17mm bushing!

Later in the series, we'll take another look at routing for a soapbar using guide bushings instead of the simple drilling/routing technique introduced earlier. We'll then build on this to extend the use of guide bushings out into other more complex tasks and templating designs. We'll see you then!

If you enjoyed and benefited from this article. become a Patron of ProjectGuitar.com and help us actively continue bring you even more articles, tutorials and product reviews like this, week-in week-out. We appreciate your feedback in the comments section, and we hope you enjoyed this article as much as we did bring it to you!

Special thanks go out to Andrew Knight (@KnightroExpress), also guilty of using a Makita RT0700C with the Porter Cable bushings.

This article was made possible by ProjectGuitar.com's Patrons