Raising the grain is a vital step in achieving a great final finish with many woods. In addition to detailing how you do this, it is important to understand the problem we're applying ourselves to and why it occurs in the first place.

Many tutorials and videos out around Internetland outline the process of grain raising before proceeding to apply your final finish. They tend to do this very well, however they seldom explain the underlying problem we're solving. Why does does the grain raise anyway? What in fact are we looking at? A bit of knowledge as to what is going on helps you go into your next round of grain raising with open eyes. Most importantly it will result in a less eventful and higher quality finishing process.

....as most people unwittingly encounter it, is in response to the first application of stain, dye or finish to a freshly finish-sanded workpiece; the surface changes, becoming rough and "wooly" as fibres stand up.

The common response is to sand the surface back to re-flatten it and simply continue from that point on. This is not too problematic if you are applying layers of an untinted or opaque finish to the wood, however it becomes unacceptable if you intend your first stage of finishing to be a dye, stain or tinted product whose look (or contribution to the final look) will be adversely affected by this sanding. Knocking back raised grain affects your schedule by adding in an extra initial step; this can be especially crucial when dialling in a very specific dye schedule on figured Maple for example. Pre-empting raised grain before finishing catches errant fibres in the act well before we commit any finish to the wood, ultimately returning freedom to our finishing process.

Raised grain occurs at a greater degree with water-based products, however also occurs with alcohol or other solvent bases which may well contain a significant water fraction. What exactly is happening and why has water got anything to do with this? There are two factors to consider:

Wood fibres are normally kept tightly locked and knitted together within the material. Our working operations alter this natural state, leaving exposed surfaces covered with both whole and partial fibres that are no longer within the strong supportive network. They sit quietly on the surface until the first coat of a finishing products hits them and pow! The fibres start to move around, warping as their cell walls swell from taking on moisture. Without a strong network around them, these unsupported fibres twist, unravel and deform freely into an ugly mess on the surface. 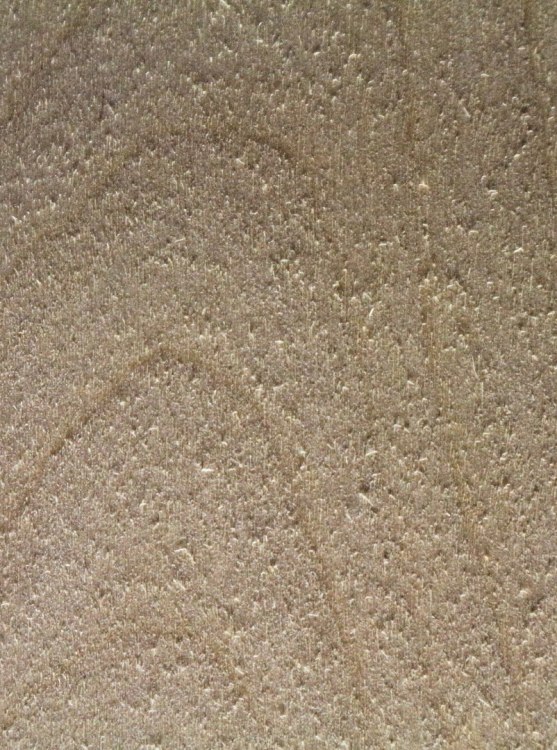 Grain-raised Birch - this isn't going to win any contests

The above photo shows a piece of Birch which had been finish-sanded and the grain raised using distilled water. What was once a seemingly-perfect clean smooth surface now resembles vegan hemp tightie-whities.

Overview Of The Grain Raising Process

We give the wood what it wants by wetting the surface with distilled water; this is readily taken onboard, causing the unsupported and damaged fibres to stand proud of the surface leaving secure fibres in place. The wood is left to dry thoroughly, and then given a few light sanding passes with the grain to remove raised fibres. Cleaning with a tack cloth or a little compressed air is advisable to remove loose material the eye might miss. The wetting process is repeated to confirm that the surface has been improved and taken through sanding again if necessary. Normally no more than 2-3 repetitions are required.

The Solution can also be the cause of The Problem

The process as described is no different to what you'd find in the majority of books and websites. It's simple and mostly effective. This said, knocking back raised grain through sanding can sometimes cause the problem to recur:

So how can we hope to win? Firstly, we need to fly in the face of common wisdom a little to stack the odds. The golden rule of "only ever sand with the grain!" can unwittingly become a hindrance. In order to lessen the likelihood that fibres will be flattened instead of being removed, sanding marginally against the grain aids our cause; "half an hour off 12 and 6" or "up to 10° from parallel" is a safe and effective option.

Counter-intuitively, removing raised grain by hand is better in achieving the fastest and finest results. Power sanders are more likely to damage additional surface fibres (which can raise with subsequent wetting) rather than working solely on the raised ones. Power sanders are designed to work the surface, which is exactly what we don't need. Lighter, less aggressive hand sanding gently catches dry raised fibres rather than further abrading the surface itself.

The board used in photography is a piece of Birch, finish sanded up to 320 grit by hand. The first application of water was done as though it were being flooded with a dye. The contrast created by the raking light makes this piece look especially ugly, and rightly so. A surprisingly large amount of grain raised from the surface within minutes. The piece was left to dry for several hours so that the raised fibres could release their water back into the air, harden off and become "sandable".

Since the surface was so rough, a made a few very light passes using a 240 grit foam pad to "catch" the larger fibres before moving back up to 320 grit paper. I didn't want to stick with 240 for any longer than necessary. After finishing up with 320, the surface was brushed clean and re-wetted. After drying, I was left with this. Still not perfect, but a long mile better than the first round...especially with the raking light! 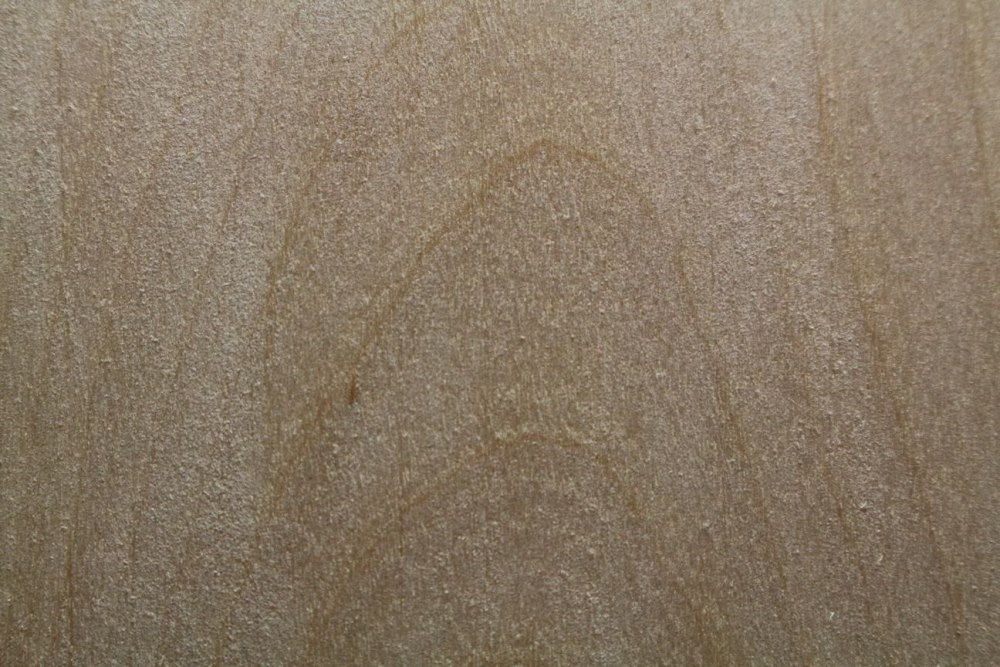 Again, I hand-sanded the piece using 320 grit paper. Fewer than 10 strokes is all it took. The surface was re-wetted and allowed to dry, producing little to no raised grain. This surface is good to go. Again, I photographed this with raking light. A little contrast in post to highlight raised grain, or the lack of it. 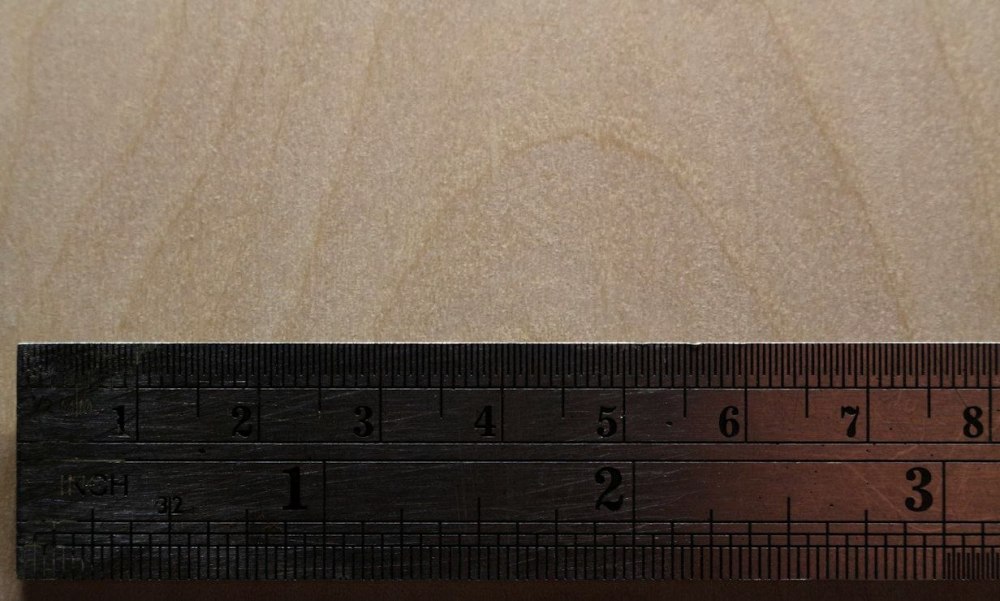 Seen at a "normal" angle, the wetted and dried surface looks as good as you could expect it to. Whilst it doesn't entirely feel as silky as the freshly finish-sanded surface, it nonetheless is perfect for subsequent finishing operations with zero concerns. 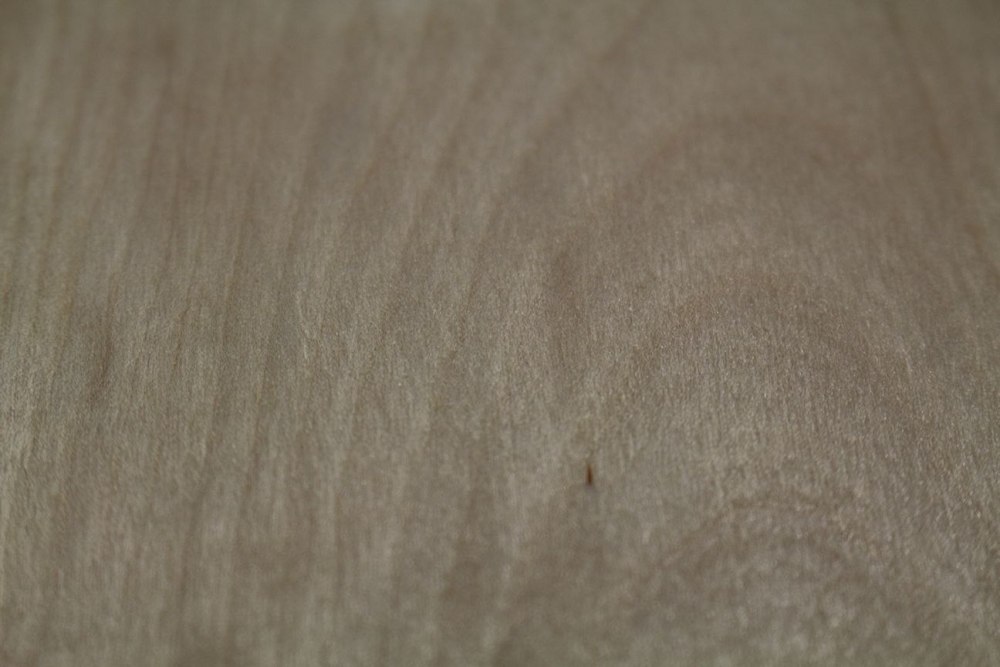 An understanding of the mechanisms behind grain-raising, what we're attempting to minimise and how we best apply ourselves to the problem is essential in trouble-free high quality finishing. We can't change the properties of wood or completely eliminate grain raising during finishing, however we can do our level best to understand how and why it reacts the way it does and keep the issue within our control.

Raising The Grain by Carl Maltby is licensed under a Creative Commons Attribution-NonCommercial-ShareAlike 4.0 International License.